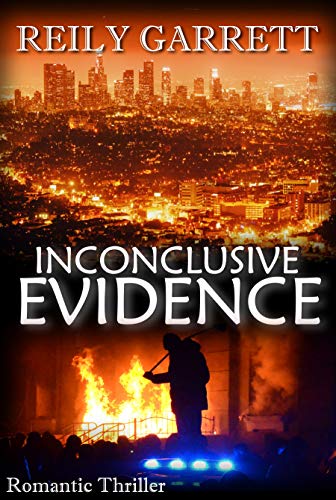 Where you can find Inconclusive Evidence: Amazon | Barnes and Noble

Braiding nanotechnology and advanced surgical techniques equals magic to the psychopathic mind.
Megan Chauner finally achieves her dream of starting a veterinary practice when a mysterious package and dire warning from her college roommate turned investigative reporter changes the course of her life. Determined to unravel the plot involving microchips and a deadly solution, she sets out to discover who murdered her best friend.
From chick magnet to a wounded cop is not a fall anyone predicted for Lucas McAllister, who now faces the biggest upheaval in his life. Coming home to start a forced retirement, he finds a sassy enigma with as much brain as beauty in his sanctuary.
Stalkers and assassins draft reality checks that test Luc’s survival skills and endurance in keeping Megan and her furball alive while uniting the McAllister brothers to thwart a bi-coastal conspiracy.

When I started reading Inconclusive Evidence, I thought that it was going to be one of those humdrum romantic suspense/ thrillers that focuses more on the romance than the thriller/suspense.  But my mind changed after the first chapter. It changed, even more, the deeper into the book.

What I liked about Inconclusive Evidence was that the author was able to keep the thriller and the romance apart. There were no mushy love sentiments in the middle of a crucial scene with the bad guys. There also wasn’t any thriller like antics when Megan and Luc were getting their freak on. It was that separation that made this book enjoyable to read. What also made the book enjoyable was that you can read it separately from the series. I also liked the characters. I also liked the storyline that involved the nanotechnology. I found it fascinating to read. I had no problem picturing what was happening in the book happening in real life.

Of course, there were things I didn’t like about the book either. I didn’t like the bad guys (duh…lol). They were evil. I also didn’t like what was done to the wolf. While I understood why the bad guys did what they did, it left a bad taste in my mouth. I also didn’t like that Megan and Luc didn’t take care of that one bad guy when they had the chance. Sorry, if I was being stalked and forced to hide off the grid, then I would be taking people out left and right. Well, if I knew they were the ones after me.

I loved Luc and Megan together. Yes, they got off to a bad start. He was ready to throw her out. Then bad things started to happen and Luc decided that he needed to help her. Didn’t give Megan a say in it either. Took her off-grid to protect her. He was always with her. Be it in her ear while she worked as a cleaner at the business where the nanotechnology was being produced or protecting her from a wolf (among other things). Megan, who was a veterinarian, used her medical training to patch up Luc, his brothers, a wolf, and the dogs. I wasn’t surprised when the sexual tension bubbled over. I was expecting it earlier. I loved that even though they were having sex. the tension was still there. There are so many times that I have read a book where it goes away after they do it.

I loved the relationship that Luc had with his brothers. They had his back no matter what. They didn’t hesitate to help him when he explained what was going on. My heart broke when his brother was infected with the nanites. Luc’s feelings of rage and helplessness came off the pages. Which is why I didn’t understand why he didn’t do that scientist in when he had the chance.

The storyline with the nanotechnology was scary. I had chills going up my spine because of how realistic it was. Not to sound like a nutter (because I am not) but I could see something like this popping up in the news. I could see nanotechnology being developed and abused like it was in the book.

The end of the book was great. The author did a great job of wrapping almost everything up. She did leave some storylines unfinished so I am hoping that means that there will be a book 4!!

What I liked about Inconclusive Evidence:

A) A line drawn between romance and thriller. No overlapping when not needed.

What I disliked about Inconclusive Evidence:

A) The bad guys

B) What was done to the wolf

I would give Inconclusive Evidence an Adult rating. There is sex. There is language. There is violence. I would suggest the no one under the age of 21 read this book.

There are no trigger warnings in Inconclusive Evidence.

I would reread Inconclusive Evidence. I would also recommend this book to family and friends.

I would like to thank the author for allowing me to read and review Inconclusive Evidence.

All opinions stated in this review of Inconclusive Evidence are mine.