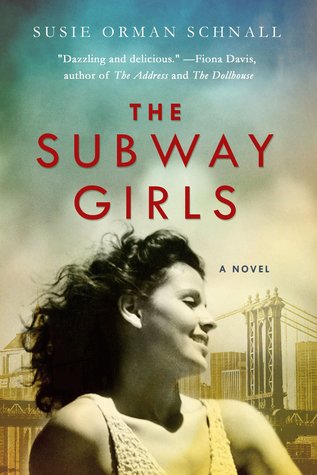 Where you can find The Subway Girls: Amazon | Barnes and Noble

In 1949, dutiful and ambitious Charlotte’s dream of a career in advertising is shattered when her father demands she help out with the family business. Meanwhile, Charlotte is swept into the glamorous world of the Miss Subways beauty contest, which promises irresistible opportunities with its Park Avenue luster and local fame status. But when her new friend—the intriguing and gorgeous fellow-participant Rose—does something unforgivable, Charlotte must make a heart-wrenching decision that will change the lives of those around her forever.

Nearly 70 years later, outspoken advertising executive Olivia is pitching the NYC subways account in a last ditch effort to save her job at an advertising agency. When the charismatic boss she’s secretly in love with pits her against her misogynistic nemesis, Olivia’s urgent search for the winning strategy leads her to the historic Miss Subways campaign. As the pitch date closes in on her, Olivia finds herself dealing with a broken heart, an unlikely new love interest, and an unexpected personal connection to Miss Subways that could save her job—and her future.

The Subway Girls is the charming story of two strong women, a generation apart, who find themselves up against the same eternal struggle to find an impossible balance between love, happiness, and ambition.

I like reading women’s fiction and historical fiction, I have had issues finding books that can focus on both of those genres. They are few and far between. So when I read the blurb for The Subway Girls, I almost didn’t get this book. I almost passed it over. I am glad that I didn’t because I would have missed a fantastic book that takes place in 1949 and present day.

I liked how the storylines mirrored each other. I didn’t get confused when going between the time periods because they were doing (or trying to get into) the same field of work. Even the mindset of the men (past and present) were the same. The only time the storylines stopped mirroring each other was when Charlotte was in the Miss Subways contest and Olivia was working on finding a way to keep her job. Even then, it was only for a couple of chapters. Then it was right back to mirroring each other.

I thought Charlotte was progressive for her time. She was trying to get into a field that was dominated by men (think Don Draper). She was optimistic until she got the last rejection letter. I liked how she called the guy and told him to keep her in mind. She had no real interest in doing the beauty contest, she entered on a whim. She needed the money but thought that she would at least have a job if they got back to her. I loved her reaction to being asked to do something that she was uncomfortable with. I was chanting “You go girl” the entire time.

I liked Olivia but I felt that she wasn’t as developed as Charlotte’s character was at first. Then she gained depth. She was a strong person but she also had a certain vulnerability to her. I didn’t get her being in love with her boss. I felt that the book didn’t have to go that way. I also felt that her co-worker was a little too hostile to women. Considering what happened at the end of the book, I wasn’t surprised. But still. I liked how she made time for her elderly next door neighbor and her grandson.

Rose’s betrayal set the tone for the last half of the book. Not going to get into it but Charlotte did the absolute right thing when she did what she did.

I loved how the author brought the two storylines together. How I didn’t see what I didn’t see is beyond me. The author did a great job at keeping Ben’s grandmother’s identity a secret. There were a few red herrings thrown out. Same goes for Olivia’s Subway Girls revival. I was so mad when the events happened the way they did.

I should mention that the contest was based on a contest that was run in New York City. The author had an afterward where she described how she took that contest and made it her own.

The end of the book cleared up some details that I figured out but needed to see in print. I like that it ended happily but realistically.

What I liked about The Subway Girls:

A) That it was based on a real contest.

What I disliked about The Subway Girls:

A) Olivia’s relationship with her boss.

B) Charlotte not being taken seriously in her career choice

I would give The Subway Girls an Older Teen rating. There are sexual situations but nothing graphic. There is language. There is mild violence.

There are no trigger warnings in The Subway Girls.

I would recommend The Subway Girls to family and friends. This is a book that I could see myself rereading.

I would like to thank St. Martin’s Griffin, St. Martin’s Press, and NetGalley for allowing me to read and review The Subway Girls.

All opinions stated in this review of The Subway Girls are mine.