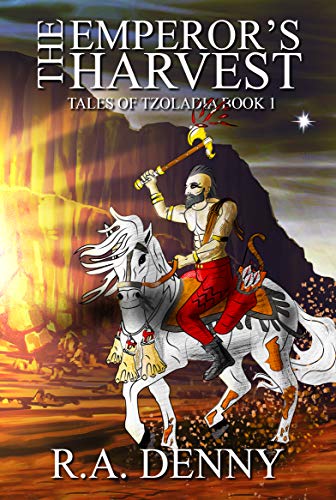 Where you can find Refugees: Barnes and Noble | Amazon

I love to listen to Baskrod’s stories. He describes warlike men with natural armor who hibernate in rocky caves and peaceful people who soar through the air in a forest of giant trees. His tales are full of foreboding dreams and ancient prophecies; royal palaces and strange creatures. My brother laughs at me. He says that the old fisherman makes it all up. But everything Baskrod has ever predicted has come true. So I have always believed his stories.

Baskrod appears to have gone mad. He claims that the emperor is sending a murderous horde of evil men to destroy our village. “They will drink your blood!” he yells, wide-eyed while standing in the marketplace waving his trident. He repeatedly begs me to escape with him. But it is harvest time, and I must stay to help my family in the fields. Anyway, the emperor has no reason to turn against us. We pay our tribute.

If only we had listened to Baskrod.

The emperor planned his own harvest. His reapers were ax-wielding horsemen. And they were not harvesting crops. They harvested my people.

Now I am the sole survivor from my village. Baskrod claims that the one God has chosen me. He says I must travel to the distant capital of Tzoladia to save the world. Maybe Baskrod is right. Maybe it is my destiny. But I’m nobody. How can I save the world?