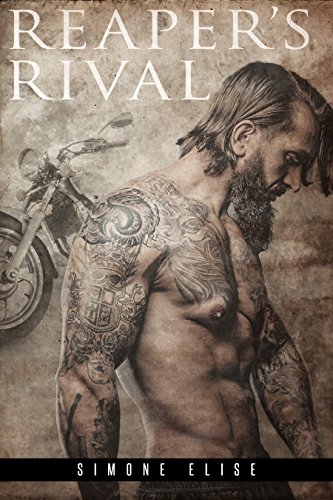 The steamy and dramatic sequel to the Best Selling Reaper’s Claim by Simone Elise.

After the events of the first book, Abby has joined her half sister’s gang Hellbound. Can Reaper claim her back?

Reaper:
This life gives you regrets on a silver platter. This life makes you colder, and there is a coldness in you now Abby, and I don’t like seeing it. It is what I was trying to protect you from. You always had an innocent heart, but something got inside and messed around with it, and I don’t like it. You can come back from this. Let me take all the bad from you so you can go back to being you. Ain’t ever gonna stop trying to make you mine.

Abby:
You have to lose yourself to really find yourself. You have to crawl through the dark times to understand and crave the light. And sometimes you need to lose the man you love to realize that what you had in the first place was in fact, love. We had a history between us. But more importantly, we had love between us and time doesn’t affect love, or at least I hope it won’t affect our love. Right now I don’t belong anywhere, but I know that no matter what happens or where I am, my heart will always belong to him.

I heard back from the publisher about what happened. The author decided to split Reaper’s Claim into two books and she added 40K worth of words to the new book, which is Reaper’s Rival. To be honest, I think it was a wise move on the author’s part. So much went on in Reaper’s Claim that it was almost too much when you read it. With the story being continued in Reaper’s Rival and new material added, it made the book a lot easier to read and follow.

Reaper’s Rival takes place 3 months after the events of Reaper’s Claim. Abby has shed her “good girl” persona and is now in a gang, working as a hit woman. If she even had a shred of me liking her in the first book, it was stomped on in this book. I don’t know if the author intentionally wrote her this way but she came across as an insecure, whiny, immature little girl who freaked if she even thought Reaper was looking at another girl but it was OK for her not to call him for months on end. I really couldn’t stand her and I would be lying if I said I wished she was taken out. But then there wouldn’t have been a story so it’s kinda a wash….lol.

Reaper was still a tough biker but I like how the author wrote in scenes that made him human. What I mean by that is that he had feelings and he really wasn’t afraid to let Abby, Kim or Roach see them. He also loved Abby no matter what. Which I am not sure she deserved with the way she acted (read the book). When he found out what she was doing in the gang, instead of running guns like she leads them to believe (not that running guns were good), he understandably freaked out. There are reasons why he freaked out. Want to know what?? Read the book.

I will say that this book had some crazy action scenes. If you don’t like blood, don’t read this book because it kinda gets a little gory at points. But it doesn’t take away from the book, it actually adds to it. But, like I said in the review of Reaper’s Claim, this is a pretty realistic view of motorcycle clubs and guess what, stuff like this is a reality for hard-core members. This club isn’t one of those clubs where the members meet up on the weekends and go cruising…..this is a club where killing, drug deals, stealing motorcycles/cars and other criminal activities are a way of life.

Reaper and Abby’s sex scenes, while hot, really didn’t do it for me. I am going to admit it is because of Abby. I just didn’t like her.

The book ends on another cliffhanger and I can’t wait to read book 3.

How many stars will I give Reaper’s Rival: 4

Why: Like I said above, I think it was great that the author decided to split the first book into two and add content to Reaper’s Rival. It actually made for a better read than reading it all at once. The characters were more in-depth, the situations that they got into were more in-depth and there was more of an understanding of why what happened at the end happened. I was very happy with it.

Why: Sex, language, violence. Also, a pretty graphic scene of a 10-year-old being murdered.