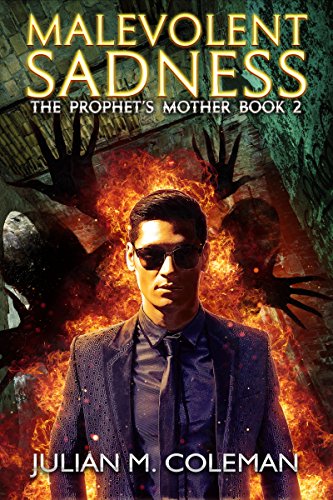 Where you can find Malevolent Sadness: Amazon | Barnes and Noble

A new paranormal suspense thriller from the WINNER of The Independent Author Network 2016 OUTSTANDING BOOK of the YEAR. Can a detective save a Prophet from a monster? Harry is an Army veteran who survived a childhood tragedy and tough years in foster care. Today, he’s a pragmatic and no-nonsense Homicide detective investigating the Victor Adamson kidnapping. As he digs for leads, Harry realizes that he’s in the middle of a dark conspiracy and that his life is in jeopardy. His only option is to save Victor. But to do that, he must understand and then embrace the supernatural. He has to believe that monsters are real. If he doesn’t, then both he and Victor may die.

I wish, wish, wish that I had read Stolen Prophet before reading Malevolent Sadness. I would have had a better understanding of some of the back story of the book. Other than that, I enjoyed reading Malevolent Sadness. This is a fast-paced book that kept me on the edge of my seat the entire book. The twists and turns in the book made it. As did the supernatural aspect.

Malevolent Sadness’s plotline pretty simple. Harry starts working on a kidnapping case. This case ends up turning into something much more. Harry learns that everything he has known for the past 10 years has been a lie. That it was part of a plot to keep him hidden from sinister forces. Harry’s world is turned upside down when he learns that the things that go bump in the night are real. But nothing compares to what he finds out about Evie and what she has kept from him. It soon becomes a race against time to find Evie’s son before something horrible happens to him.

I liked Harry. He was a no-nonsense cop that did his job well. I thought he was treated horribly by his fellow officers. The nicknames that they called him. “Cap’n Eunuch” was one. I also felt bad for him. He had a bunch of life-changing information sprung on him at once. While on the job. I was surprised that he didn’t blow a gasket sooner than he did. He did give his all to solving the case.

I couldn’t put this book down. Even though it is not a stand-alone book, I was still sucked in. That very rarely happens with me when I am reading a nonstandalone book. Most of the time, I am stuck wondering about the earlier book or the characters relationships than focusing on the book.

Also, the twists and turns in the book were fantastic. The author had no qualms about injuring off what I deemed important people to the plot. Loved it!!!

What I also didn’t like was the secret that Evie kept from Harry. How he was told/found out was awful. I would have spit nails, I would be that mad. I did think that he dealt with everything pretty well.

The paranormal angle of the book was fantastic. I loved the idea of an avenging goddess. She was badass in all the scenes. I also liked that the author touched upon other paranormal beings. The shapeshifter/demon was one.

The suspense angle of the book was fantastic also. Like I stated above, I was kept on the edge of my seat with everything that was going on. I love it when a book does that to me!!

The horror angle fell a bit short for me. I was scared during certain scenes but I wasn’t scared enough. I am thankful that the paranormal and suspense angle was more than enough for this book.

The mystery angle was very well written. I was as surprised as Harry was at who had Victor. It wasn’t who I thought it was.

The end of the book was intense. Everything came together in a way that satisfied me as a reader. I was a little put off that the book ended as a cliffhanger. But, it makes me want to read book 3.

What I liked about Malevolent Sadness:

B) twists and turns in the plot

C) Harry. He was a tough guy

What I disliked about Malevolent Sadness:

A) Almost no understanding of Evie and her religion

B) The secret that Evie kept from Harry

I would give Malevolent Sadness an Adult rating. There is no sex but some sexual situations. There is language. There is violence. I would recommend that no one under the age of 21 read this book.

There is a trigger warning for Malevolent Sadness. It would be kidnapping. If that triggers you, I would suggest not to read the book.

I would reread Malevolent Sadness. I would also recommend it to family and friends.

I would like to thank the publisher for allowing me to read and review Malevolent Sadness.

All opinions stated in this review of Malevolent Sadness are mine.