The Last Time She Saw Him – Book 1 (review here)

In Jane Haseldine’s new novel of riveting suspense, Detroit newspaper reporter Julia Gooden is up against the city’s most devious criminal—and her own painful past.

Julia Gooden knows how to juggle different lives. A successful crime reporter, she covers the grittiest stories in the city while raising her two young boys in the suburbs. But beneath that accomplished façade is another Julia, still consumed by a tragedy that unfolded thirty years ago when her nine-year-old brother disappeared without a trace.

Julia’s marriage, too, is a balancing act, as she tries to rekindle her relationship with her husband, Assistant District Attorney David Tanner, while maintaining professional boundaries. David is about to bring Nick Rossi to trial for crimes that include drug trafficking, illegal gambling, and bribery. But the story becomes much more urgent when a courthouse bomb claims several victims—including the prosecution’s key witness—and leaves David critically injured.

Though Julia is certain that Rossi orchestrated the attack, the case against him is collapsing, and his power and connections run high and wide. With the help of Detective Raymond Navarro of the Detroit PD, she starts following a trail of blackmail, payback, and political ambition, little imagining where it will lead. Julia has risked her career before, but this time innocent lives—including her children’s—hang in the balance, and justice may come too late to save what truly matters…

I was excited when Jane Haseldine contacted me to review her 2nd book in the Julia Gooden series. I had absolutely loved The Last Time She Saw Him and hoped that Duplicity would be just as good. I wasn’t disappointed.

The book starts a few months after The Last Time She Saw Him ended. Julia and David are working on repairing their marriage. David flaked out during the last book and moved out when things got tough. He also had an affair with a fellow lawyer. Julia is working on trusting David and she is going to therapy to help get over the guilt she carried over her brother’s disappearance when she was seven.

Julia is working on a story about Nick Rossi, who is on trial for a number of charges. Which seems like a conflict of interest but she claims it isn’t. The same day that she is going to be in court, following the trail, her son, Logan is going on a field trip to the courthouse. She promises Logan that she will be there for the field trip.

While reading a newspaper, she finds out that the identity of the key witness was leaked to the press. This means that Rossi knows who he is and there is concern that he will try to take him out. She tries to call David to warn him, but he isn’t answering his phone. So she heads towards the courthouse, when the bomb goes off. The bomb kills 13 people and injures many more, including David and the judge presiding over the case. Luckily Logan’s bus got caught up in traffic and never made it to the courthouse.

I loved the whodunit about the bomb because the author kept it under wraps and threw out red herrings left and right. Just when I thought I knew who set it, bam, it goes in a different direction. So when it was revealed who was the bomber at the end of the book, I was very surprised. Probably as surprised as Julia.

David did have my sympathy after he got hurt. But what came to light afterward, well let’s just say that I wouldn’t have been as nice as Julia. I probably would have beaten him in the hospital bed.

The end of the book was awesome. Full of action and surprises, I was kept in suspense until the very end.

I would give Duplicity an Adult rating. There are sexual situations. There is language. There is violence. I would recommend that no one under the age of 21 read this book.

I would reread Duplicity. I would recommend it to family and friends. 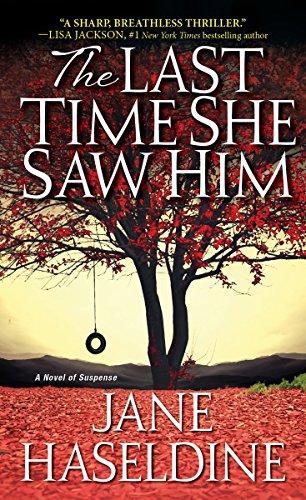 Part of a series? Yes

Where the book can be found: Amazon  | Barnes and Noble

In Jane Haseldine’s gripping and brilliantly crafted debut, a reporter searching for her kidnapped son must untangle the connection to her brother’s long-ago disappearance.

Julia Gooden remembers nothing about the worst night of her life. Thirty years ago, her nine-year-old brother Ben—the person who promised he would always protect her—was abducted from the room they shared. Try as she might to recall any clue or detail, there is a black hole where Julia’s memories of that terrible event should be.

Now a crime reporter at a Detroit newspaper, Julia tries to give others the closure she’s never found. But guilt and grief over Ben’s disappearance have left her fearful that whoever took her brother is going to come back. Nowhere seems safe—not the city, not the suburbs, not even the secluded lake town where she plans to raise her children. And then, on the anniversary of Ben’s disappearance, Julia’s worst fears are realized when her two-year-old son, Will, is snatched from his bed.

Convinced that the crimes are related, Julia tries to piece together memories from her final day with Ben. Are the sudden reminders of her brother clues that will lead her to her son’s abductor, or merely coincidence? Julia knows she has hours at best to find Will alive, but the deeper she digs, the more personal and terrifying the battle becomes, and an undying promise may be her only hope of saving herself and her son.

If you are looking for a book that showcases the best and worst of people and has a dash of the supernatural in it, read this book.

Julia was not a character that was likable and I love that the author wrote her that way. She suffers from survivor’s guilt after her older brother was kidnapped out of their room when she was 7. That one event shaped her entire life. Julia tortures herself over his disappearance. Because she didn’t get up to lock the door that led to the outside because she didn’t want him to think she was a baby. This has affected all areas of her life, from her job to her marriage to the way she parents her children.

The story got going when her 2-year-old is kidnapped out of his room. The author did a great job writing that part of the book too. She captured Julia’s terror and her fight to get her child away from the kidnappers.

The book then became a mishmash of present and past.  It was discovered that the same Indian head arrow was left under Will’s crib. Which was a connection to her brother’s disappearance.

But all is not what it seems. Clues were given by a pedophile pastor. A police detective was halfway in love with her. I didn’t know what direction the book is going in. And that was the best thing about it!!!

I didn’t know who the kidnappers are until the very end of the book. The author did a fantastic job of keeping that hidden. She threw out red herrings and created a couple of false leads that when it was revealed, I  went “Whaaaat??“

How many stars will I give The Last Time She Saw Him? 5

Why? This was a very well written mystery that had a splash of supernatural in it. The author did a very good job at keeping me on my toes about who was Will’s kidnapper until the very end.

Why? No sex but a lot of violence and some pretty graphic descriptions of sexually abused children.