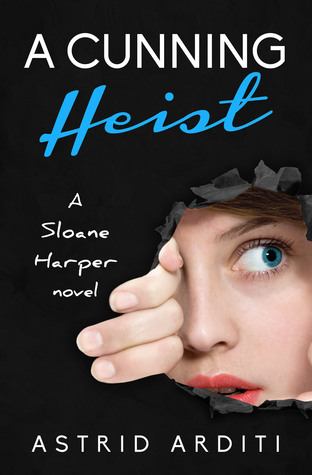 Where you can find A Cunning Heist: Amazon

Sloane Harper has sworn off men—for her sanity, and her safety. But with or without men, trouble always seems to find Sloane.
When her ex’s ex-mistress comes knocking for help, Sloane does what she does best: she helps way more than she should. As she investigates London’s art scene, Sloane runs into a very handsome but very shady artist, a quirky bunch of thieves, and a cunning old flame.
Perhaps Sloane should have sworn off playing private detective instead of men.

Sloane is one of my favorite literary characters out of everything that I have read recently (within the last 6 months). She is sweet, clumsy, a great mom and trying to find herself and her way after the hijinks in A Cunning Plan and her devastating divorce. She was also very forgiving and it was that forgiving nature that landed her in the middle of a mess this time. Maybe it’s because I am not a nice, forgiving person, but I couldn’t, no wouldn’t be friends with someone who broke up my marriage. The fact that she was working on herself (and her list cracked me up, btw) and trying to better herself was great.

I didn’t feel the romance between Ethan and Sloane this book. Maybe because the book was so focused on Sloane, I just didn’t connect with Ethan the way I did in the first book. Also, he came across as very jealous and almost stalkerish at the beginning of the book. I kinda laughed when he was jealous of Felix and Sloane and assumed that he was her boyfriend. I mean, hello, he didn’t contact her for months afterward, she should have moved on.

There is a small plot twist at the end of the book that took me by surprise. But, it did give the perfect clue to the next book and I can’t wait to read it!!

How many stars will I give A Cunning Heist: 4

Why: Great, snarky characters with an awesome plot line. 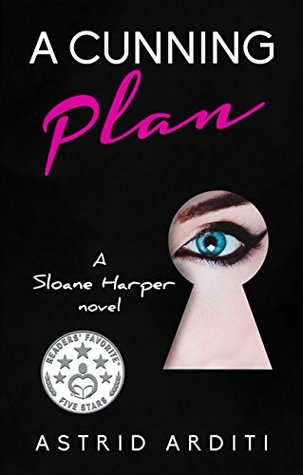 Can be read out-of-order from series: Yes, 1st book

The First Sloane Harper Novel
Determined to put her family back together, Sloane Harper stalks her ex-husband and his annoyingly stunning mistress, Kate Stappleton. But she’s not the only one. Handsome IRS agent Ethan Cunning is surveying Kate too, but for entirely different reasons. He is attempting to nail Kate’s playboy boss. Ethan and Sloane decide to help each other, which sends Sloane’s wobbly life spinning out of control. She’ll have to face danger, humiliation, and – scariest of all – the dating scene, to lure her daughters’ father home. Losing control was the best thing to happen to Sloane…until it turned lethal.

I am going to come straight out and admit this, I didn’t think I would like A Cunning Plan by what I read in the synopsis <hangs head>. What I didn’t expect was the humor that was in the book. I wasn’t expecting to laugh as much as I did.

I actually felt very bad for Sloane in the first few chapters of the book. She was blindsided by her divorce and refused to accept it. She had the mindset that her divorce was only temporary and that her husband will eventually come back and remarry her. I actually wanted to hug her during that part of the book. It was so sad to read. But, once Ethan began his campaign to get her to do his dirty work (get into for Gabriel Varela) for him, the book took off.

Tom, Sloane’s ex, was a huge jerk and I really wanted to punch him. He knew that Sloane wanted him back and he kept stringing her along. To be honest, I couldn’t stand how he treated her. Like she was beneath him. Always laughing at her when she would trip or make a mistake. When Sloane decided to start living her life instead of waiting for him, in other words…dating, he freaked out. Hardcore freaked out. I think I said out loud during that point of the book “Can’t have your cake and eat it to sweetpea”.

Ethan Cunning, oh where do I begin with him. I had a love/hate relationship with him, like Sloane. He kinda did creep me out with all the stalking he did. I mean, he showed up everywhere Sloane was and it was freaky. But, in a way, Sloane was getting hers for stalking Tom’s mistress/new girlfriend. I also didn’t like how he could change in a minute. When he called Sloane desperate (all because he was jealous of her dating Gabriel), I wanted to reach through the book and smack him. Hard.

I loved the friendship that Sloane had with Claudia. It was one of the most honest ones in the book and oh boy, did Claudia not hold back. She was brutally honest and did not hold back of her dislike for Tom (which made me love her even more). She truly had Sloane’s best interests at heart and she was truly a best friend to Sloane.

The relationship Sloane had with her mother, Bizzy, was very complicated. To be honest, I did think was very selfish in taking advantage of her mother for 6 months but then again, I didn’t think it was selfish. Bizzy was not a great mother….always putting Sloane down, buddying up to Tom and harping on Claudia. Plus, she was always drinking her “lemonade” and was always half lit. The whole day after a binge with Claudia was hilarious.

What I liked the most about this book was that Sloane cherished her children and Tom was a great father, even if he was a jerk in every other area of his life. They made a united front to co-parent as peacefully as possible for Rose and Poppy. I will say that the highlight of this book was the horse/whore conversation and its after-effects. I couldn’t breathe, I was laughing so hard.

The storylines of A Cunning Plan were great. I couldn’t decide if I was Team Ethan or Team Gabriel for most of the book but I can tell you that I was most definitely not Team Tom. I do like that Sloane’s super secret spy mission did get results, even if it did go a little haywire (well, a lot haywire). I do have some questions that needed to be answered (what about Alina and Sloane’s friendship? Will it survive what happened?) but I am sure that it will be answered in the next book.

How many stars will I give A Cunning Plan: 4

Why: A very fast paced mystery that kept you guessing. Also a great look into how a woman blindsided by her divorce got her life and self-worth back.