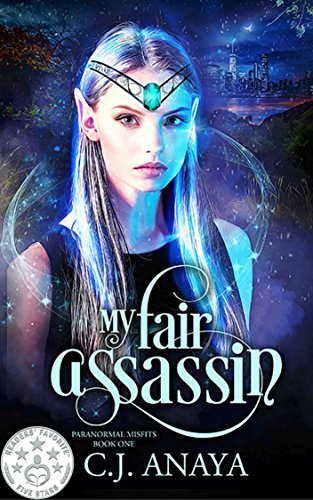 A lonely foster teen meets a Fae warrior on assignment.

Crysta is freakishly different, never quite fitting in with her various foster families. Her shocking looks and creepy powers scare off potential friends, and her otherworldly presence tends to attract unwelcome and dangerous admirers. Now that she is finally on her own, her plan is to focus on dance, trust absolutely no one, and avoid the rest of humanity.

Her plans are shattered when a handsome man breaks into her apartment and declares he’s there to kill her.

As a highly skilled assassin and future heir to the Seelie throne, Prince Jareth carries the weight of the Fae realm on his shoulders. When he’s given the assignment to take out one of the biggest threats the Seelie Court has ever known, he’s not expecting said threat to come in the form of a petite teenager who can barely afford to feed her cat let alone mastermind the destruction of an entire world.

He’s duty-bound to see this assignment through, until he realizes he’s been sent to kill his fated mate.

He must follow through with his assignment or risk the wrath of his father, but killing Crysta means losing the most precious gift a Fae warrior could ever hope to receive.

The love of a fated mate.

When I started reading My Fair Assassin, I was “meh” about it. Who would be OK with a strange guy appearing in their apartment and announcing he was there to kill her? Not me. I would be running around the apartment screaming my fool head off. Crysta was laid back about it. Once I got past that first chapter, the book gets much more interesting.

I liked Crysta’s character. She looks different, is a vegan and she has powers. She is down to earth, funny and sarcastic. She suffers from poor body image. To fit in, she filed her ears down and dyes her hair blonde. I felt sad when she explained why she did that. It reflects what teenagers are going through in today’s society.  As a mother of a teen girl, it is refreshing to see these issues addressed.

Jareth is a hottie. Think a male version of Crysta but with more powers. I didn’t like that he knew everything and let it trickle down to her. Considering her self-esteem/trust issues, it was a wise choice and you could tell how much he cared about her.

I didn’t care for the Instalove BUT it went well with the story. Jareth had Instalove first. It made sense. You need to read the story to understand what I am saying.

The ending was interesting. Things came out that surprised me. One of those things, I figured out as soon as Jareth appeared in Crysta’s apartment. The other main thing did surprise me and it made me a sad for Jareth.

How many stars will I give My Fair Assassin? 4

Why? This was a good fantasy/Ya book with a great message in it. The author does include a note at the end of the book that she wrote it for her teenage niece and that brought tears to my eyes. It was very sweet!!

Why? Some violence, some kissing….but no sex.