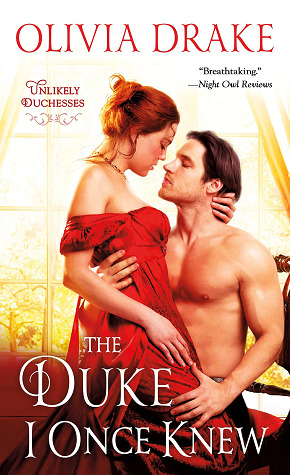 The Duke I Once Knew—Book 1

Where you can find The Duke I Once Knew: Amazon | Barnes and Nobles

First love is always the sweetest.

For years, Abigail Linton devoted herself to caring for her aging parents and the children of her siblings. Now, eager to make her own life, she takes a position as a governess on the neighboring estate. It shouldn’t matter that her absentee employer is Maxwell Bryce, the Duke of Rothwell, the infamous rake who once broke her youthful heart. Surely he’s forgotten her, for he hasn’t set foot on his estate for fifteen years. At least, that is, until he arrives unexpectedly.

Max is incensed to meet his sister’s new governess. But why does Abby seem just as displeased to see him when it was she who’d rejected him all those years ago? Why is he so drawn to the independent spinster she has become? And why is there a sparkle in her beautiful blue eyes that suggests they might have a second chance at love?

Abigail is at a crossroads in her life. Having been the caretaker for her elderly parents until their deaths the previous year, Abby wants to make a life on her own. She decides to apply for the position of governess at a nearby estate. Max was stunned when he saw that Abby was his sister’s governess. He had never gotten over her rejection of him 15 years earlier. But, he is drawn to her in a way that he isn’t drawn to most women. Will there be a chance at second-hand love? Or will Max slip through Abby’s fingers yet again?

I had mentioned in my WWW Wednesday post that I didn’t care for The Duke I Once Knew. When I had posted that, I was about 50% through the book. I wasn’t lying. I didn’t care for the book at that point. I did like the main characters and their storyline. I didn’t like the extra drama. Like I mentioned in that post, I just about lost my eyes because they were rolling so hard. Weirdly enough, I did like the last half of the book. All the drama was pushed to the back-burner and I got to enjoy the book for what it was. Abby and Max rediscovering each other.

I thought that Abby gave up a lot in her life. To take care of her parents, Abby gave up any chance of marriage. At 30, she was considered a spinster. And guess what, she was fine with that. What she wasn’t fine with was her brothers and sisters arguing about what to do with her. I didn’t blame her for deciding to go and apply for that governess position. Even though she thought that Max hated her, she still went and became his sister’s governess. I loved how sarcastic Abby was. Her zingers at Max had me laughing.

I liked Max even though I thought he was a tool. Who brings a woman he wants to seduces to a house he hasn’t been to in 15 years? Max does. But, for all his faults, he was a good guy. He went out of his way to help Abby when he shouldn’t have. He treated his house servants like family. He was willing to do the right thing by Abby when they had sex by the lake. He made hero status in my eyes with what he did with his wannabe mistress. I cheered when that happened.

There was sex in this book. But what I liked was that it wasn’t graphic. The author left enough unsaid where I had to use my imagination. What I liked also was that Abby was comfortable enough in her own skin to own what happened. I liked that she didn’t want Max to offer for her because they bumped uglies. She wanted him to offer for her because he loved her. Not because he felt he was honor-bound because he popped her cherry.

I couldn’t stand Lady Desmond. She was a despicable human being. She was so jealous of Abby that she was willing to hurt her to take her out of the picture. She was also willing to put Max’s younger sister in situations that young women shouldn’t be in. And with people that they should be around. I was wondering if Max was ever going to come to his senses about her. I was disappointed it took almost the entire book for him to actually do something.

I didn’t like the end of the book. It seemed rushed. I didn’t like how Abby jumped to conclusions about Lady Desmond and Max. It went against everything that I had read about their relationship. It also ended suddenly. There was the HEA and then nothing. I was expecting an epilogue or something that showed what happened after the “I love you” was said. Also, seeing that this was book 1 in the Unlikely Duchesses series, I couldn’t pinpoint who the next story was about? Was it Abby’s niece? Or Max’s sister? Again, usually, there is a hint about who the next book is about.

I gave The Duke I Once Knew a 3.5-star rating. I enjoyed reading this book but it fell flat for me in some areas. I loved how Abby was an independent woman in an era where a woman was expected to be seen but not heard. It was the extra drama involving Lady Desmond that lowered my rating. While it did add some depth, I felt that her storyline went on for too long. Other than that, I enjoyed the book.

I would give The Duke I Once Knew an Adult rating. There is sex. There is violence. There is no language. There are triggers. They would be suicide. I would recommend that no one under the age of 21 read this book.

I would reread The Duke I Once Knew. I would also recommend this book to family and friends.

I would like to thank St. Martin’s Paperbacks, St. Martin’s Press and NetGalley for allowing me to read and review The Duke I Once Knew.

All opinions stated in this review of The Duke I Once Knew are mine.

Have you read The Duke I Once Knew?

4 thoughts on “Blog Tour: The Duke I Once Knew (Unlikely Duchesses: Book 1)”