It is Foodie Friday. Every Friday, I will be putting up a recipe that I have made the previous week. 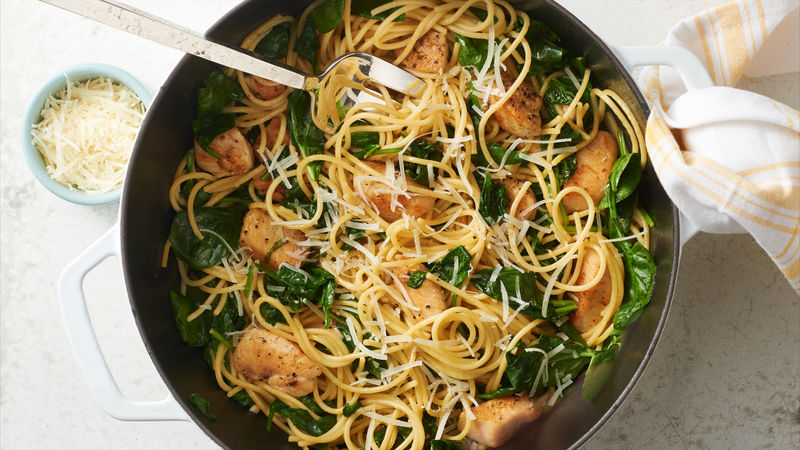 (recipe and picture courtesy of Betty Crocker. Click on the picture for link to the recipe)

What I did differently in this recipe (the **’s):

Was it hard to make: Nope, not at all. Would be easy for someone who is just starting out cooking to make.

How long did it take me to make (compared to the recipe’s prep+total time): It took me longer. Even though I cut down on my prep time, it got eaten back up when I was waiting for the spaghetti cook and absorb the chicken broth.

Did BK and I like it: We both did. BK said that the spinach and chicken were cooked perfectly. His only complaint (which was mine also) was that it was a little too lemony. When I make it again, I will be cutting down on the amount of lemon used.

More importantly, did my kids like it: Two out of the three did. Miss B loved the chicken and pasta but didn’t care for the spinach. Mr. Z cleaned his plate and wanted seconds. Miss R tried a bite of it and didn’t like it. Said it tasted gross (I think she got a bite of the lemon). But she tried it and that’s all I can ask for.

Will I make it again: Yup

Thoughts on the dish, after the fact: Fairly easy to make. Also very each to prep for. I would cut down on the lemon used. Other than that, excellent dish.

The difficulty of the dish: Beginner