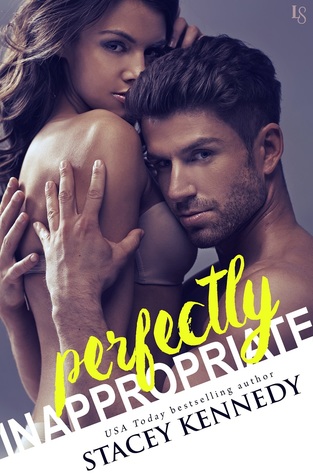 Where you can find Perfectly Inappropriate: Amazon | Barnes and Noble

A woman scorned and a politician with a wild side connect online—and explore their hottest fantasies in the flesh.

Olivia Watts knows that her problems are painfully average. She got engaged, and her fiancé cheated. She gave up on her dream job—street photographer—and settled on a more practical one: graphic designer. She scrimped and saved to buy a home, only to realize how empty it was. So when Olivia hears about an exclusive dating app that matches subs with highly trained doms, she does something she never thought she’d do in a million years: She signs up. The last thing she expects to find is a man whose sizzling touch reawakens the woman she used to be. . . .

Noah Grant has no time for relationships. His sole purpose is to win reelection. That’s why he pays a premium to the discreet app that satisfies all his dark desires. But after sweet, innocent Olivia is vetted and arrives for their week together in his penthouse, it’s blatantly clear that she’s running from her demons. Noah’s more than willing to be her escape—until their emotions get tangled up in their games. Now, to become worthy of Olivia’s heart, Noah will have to prove that he’s more than a fantasy.

Olivia is trying to get her life back on track. A couple of months ago, she had walked in on her ex-fiancee in bed with her former best friend. Ever since then, she has felt like she needed to do something more with her life. So, when an opportunity arises for Olivia to expand herself sexually, she takes it. She figures, what is the worse that could happen. What she never expected was to find the one man who makes her body sing. Noah is a NY senator who uses SiR to find women who have the same sexual likes as he does. He doesn’t want a relationship. All he wants is the week or two that his sub gives him. But, when he meets Olivia, he realizes that he could have more with her. Can he convince Olivia that he wants more? Or will she walk out of his life?

I wanted to gut punch Olivia’s ex. He was such a scumbag. Every time Olivia was starting to feel good about herself, he would either make an appearance. He deserved the beat down that Noah gave him. I actually wanted to jump into the book and take part in the beat down. I also couldn’t believe the excuses he gave about why he cheated. He was scum.

I loved Noah and Olivia together. Even from the first meeting, you could tell that there was more than just sex. I liked how honest Olivia was with Noah. I liked how Noah went from wanting just sex to having a relationship with Olivia. I loved how he went about showing that he wanted a relationship for her. That was a huge OMG moment for me. I did get teary eyed (but didn’t cry).

I did feel bad for Olivia while reading. I also knew what she was going through with trying to rediscover herself. I loved how the author made her photography a part of the storyline. I didn’t know what a street photographer was until I read this book. I also liked that she was able to forgive Lacie and Cameron for what they did. It took a while, but she was able to forgive. She was a better woman that I could be. I am more like Paige, her other bestie. I hold a grudge.

The end of Perfectly Inappropriate was one of the best endings that I have read to date. That OMG moment that I mentioned above. It’s here. If I had any doubts about how Noah felt about Olivia, yeah they were put to rest there. And the epilogue. I had happy tears when I read that. Olivia got the HEA that she deserved and then some. Loved it!!!

I gave Perfectly Inappropriate a 4-star review. I enjoyed reading this book. I connected to both of the main characters. I loved the storyline. There wasn’t anything that I didn’t like that made a huge impact on my review.

I would give Perfectly Inappropriate an Adult rating. There is explicit sex. There is language. There is violence. There are trigger warnings. They would be cheating. I would recommend that no one under the age of 21 read this book.

I would reread Perfectly Inappropriate. I would also recommend this book to family and friends.

I would like to thank Loveswept, Random House Publishing Group, and NetGalley for allowing me to read and review Perfectly Inappropriate.

All opinions in this review of Perfectly Inappropriate are mine.

Have you read Perfectly Inappropriate?

One thought on “Perfectly Inappropriate by Stacey Kennedy”