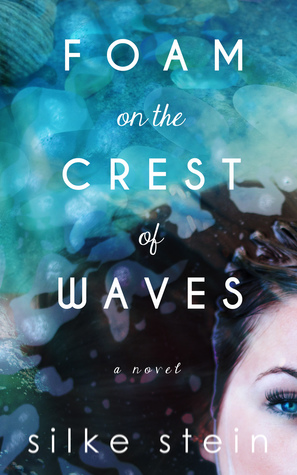 Where you can find Foam On The Crest Of Waves: Amazon | Barnes and Noble

Can facing the past transform the present?

In a small fishing town on the Mendocino coast, the tides of time have washed over rumors and suspicions, yet the members of a maimed family still struggle to cope with their memories.

A broken woman, refusing to let go of her vanished husband.
Her widowed brother, clinging to the shatters of the life he loved.
His delusional daughter, planning to turn mermaid on her fifteenth birthday.

But when a young man realizes he made a mistake, secrets start emerging from the deep. Will they bring further grief, or possibly redemption?

Abalone has never recovered from the death of her mother. Becoming selectively mute, Abby communicates with gestures and through her jewelry/artwork. Because she won’t talk, Abby hasn’t let on that she plans on turning into a mermaid on her 15th birthday. She believes that her mother is alive, living with the mermaids and wants Abby to join her. Jeremy is Abby’s father. For the past 7 years, he has been in a fog of grief, only coming out to somewhat deal with Abby’s issues. He is jolted out of his fog by a series of events. He is forced to face that his wife wasn’t who he thought she was. Devastated by the disappearance of her husband, Gina has thrown herself into helping Jeremy and Abby. But, Gina knows a secret. A secret that could devastate Jeremy and Abby if they found out. Lief somehow has gotten himself into abalone smuggling without knowing how. His secret passion singing and he has a voice that rivals professionals. Lief has developed a stalker like interest in Abby after she assaults him. What will happen on Abby’s 15th birthday? Can this family survive the secrets? Or will Abby be lost to the mermaids?

Foam on the Crest of Waves is a very loose retelling of The Little Mermaid. The more accurate description would be a reverse telling of The Little Mermaid. What I liked about this book was that the author ran with the retelling. She took that fable and put her own twist on it. I also liked that she followed the original Hans Christian Andersen tale. She did mention the Disney retelling several times during the book. The mural was a huge homage to it. But the bones of the story was the original story.

There was one point in the book where I had several “WTH” moments. I didn’t understand how Lief’s parents didn’t know what he was up to. Didn’t they want to know where he was getting the extra money from? How did they not know about his amazing voice? He had to of sang when he was younger. Abby was 15, why was she allowed to wander all over the place? At one point in the book, she took a train out-of-town and she spent the night in the woods. Jeremy and Gina didn’t notice that she was gone. That drove me nuts.

The plotline involving Abby was broke my heart. She believed that she would turn into a mermaid on her 15th birthday. I liked how the author chose to have Abby doubt if that was going to happen. I liked how what happened the night that Fern died was leaked. It kept me guessing. But the truth of what happened was a shocked the heck out of me. I wasn’t expecting that.

Lief’s storyline was very well written also. He was so conflicted about what he should do with his life. Abby assaulting him made him think about what he was doing with his life. The scene in the woods was the turning point for him. I was afraid for him, considering what Abby was thinking when they were in the water towards the end of the book.

Jeremy was broken. Fern’s death destroyed him. Abby was the only thing that kept him going. But, as the book went on, it seemed like Fern played fast and loose with him. The news he got about Abby the night Fern died was heartbreaking. I did want to know what the DNA test results were, though. It was never mentioned again.

I did like Gina and felt awful for her. I couldn’t imagine not knowing what happened to my husband for 7 years. And the secret that she carried was soul eating. Do I think that she should have told Jeremy sooner? Yes but then the book wouldn’t have played out the way it did.

The end of the book was amazing. I loved how the author brought all the storylines together. It was perfect. The epilogue was great also. But I did worry about Abby. Her final scene bothered me. It made me think that nothing changed with her.

I gave Foam On The Crest Of Waves a 4-star rating. This book was a wonderful retelling of The Little Mermaid. I connected with each character. The plotlines were all very well written. The only thing I didn’t like was how it went back and forth in time. Other than that, a wonderful book.

I would give Foam On The Crest Of Waves an Adult rating. There is sex but it is not graphic. There is language. There is violence. There are triggers. They would be the death of a parent, death of a spouse, cheating, traumatic accident, and talk of suicide. I would recommend that no one under the age of 21 read this book.

I would reread Foam On The Crest Of Waves. I would also recommend this book to family and friends.

I would like to thank the author and NetGalley for allowing me to read and review Foam On The Crest Of Waves.

All opinions stated in this review of Foam On The Crest Of Waves are mine.

Have you read Foam On The Crest Of Waves?