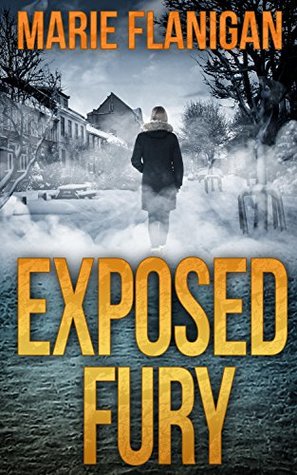 Where you can find Exposed Fury: Amazon | Barnes and Noble

Annie Fitch, a former police detective, struggles to make ends meet as a private investigator in the sleepy town of Leesburg, Virginia. On partial disability because of gunshot injuries, she’s relegated to doing surveillance gigs and background checks. But things are looking up, since her on-again, off-again relationship is back on and might stay that way.

When Annie is hired by Laura Carlton to follow her husband to get evidence of cheating, Annie is certain the case won’t take long. Nick Carlton grew up with money and privilege and has a sex addiction dating back to his high school days. But things go sideways when Annie finds her target dead in an alley just a few blocks from her own home.

Working with her former partner, Gunnar Jansson, Annie digs deeper into Carlton’s background, slowly excavating his past to reveal the multiple suspects and motives. The list includes his many lunch-hour-tryst partners, a local shop owner, and his business partner, among others. Layer by layer, Annie uncovers a truth that runs deeper than anyone expected.

Annie is a detective turned PI. Forced off the squad due to a brain injury that occurred when she was shot on the job, Annie is struggling to make ends meet. She is also struggling with not having the physical or mental abilities that she had before she was shot. So when Laura contacts her to follow her husband and get evidence of cheating, Annie agrees. What Annie was not expecting was to find Nick’s body during her walk with her dog. She also doesn’t expect to get drawn back into the investigation when Laura hires her to find out who killed Nick. Working with her former partner, Gunnar, Annie digs through the tangled mess that was Nick Carlton’s life. But she is in for a surprise when she figures out who killed Nick and why. Who killed Nick? What was his/her motivation? Can Annie come through this investigation unscathed?

I have come to appreciate a good mystery. A good mystery needs to draw you in and keep you engaged in the story. Which is tricky because the author has to keep the clues to the mystery a secret but at the same time give out hints about what is going on. It’s a balancing act and sometimes, the author slips. There have been books where I have figured out what was going on or who did it by the middle of the book. But with Exposed Fury, that wasn’t the case. Marie Flanigan did a fantastic job of keeping who killed Nick and why under wraps until the end of the book. I will get more into that when I discuss the ending.

I loved Annie. The author did a fantastic job of creating a character that I could relate to. Annie didn’t let her disabilities get in the way of trying to get back on her feet. While she wanted to be back on the force, she understood that it wasn’t going to be. So she decided to become a PI. Her strength came off the pages. I also liked how she knew that she needed help with things and wasn’t afraid to ask. She also had a strong sense of family. While her father drove her nuts, she understood that he was afraid and that was coming from love. Her devotion to her brother was sweet.

The mystery angle of the book was amazing. The author did a fantastic job at keeping who killed Nick a secret until the end of the book. I was in shock over who it was. I had another person pegged for it. So when the plotline did a sudden turn and pointed in another direction, I was shocked. I was also shocked at why that person did it. Another shock.

The author also did a great job at portraying Annie’s continuing recovery from her brain injury. She made a point to let us readers know that Annie was not the same person she was before the brain injury. Annie was a, for lack of a better word, gentler, more emotional person. She empathized with people easier. From what I gleaned from the plot, Annie was more uptight and not as emotional before the injury.

The main plotline, the investigation of Nick’s murder, was interesting and wonderfully written. The author took me on a rollercoaster journey. She fingered so many people who I had a list of suspects to pick from. Red herrings were thrown out left and right. Normally, I would get irritated when that happens. But in this case, it was great and worked with the plotline.

The plotline with Annie’s on again, off again boyfriend was kind of “meh” with me. Not that I didn’t like Ford, I did, but I didn’t like that he was leaving Annie all the time. Like Annie, I would have been upset over his constant coming and going. Plus, he never mentioned what he did for work. Just that it was for the government and he was sent into high-risk areas (like Afghanistan). I wish that there could have been more stability with him. I would have loved more clarity with what he did.

The plotline with Annie’s father drove me nuts. I completely understood where he was coming from. His kid almost died and suffered a brain injury. But he didn’t support her career choice. He kept harping on it. Every single scene he was in, he kept mentioning how she should go back to college, get another job. Annie did brush him off, for the most part, but I got sick of it. I wanted to jump in the book and say “Leave her be!! Support her, darn it.”

Like I mentioned above, I loved the end of the book. The author did a fantastic job at wrapping up Nick’s murder plotline, as well as a couple of the secondary ones. She did leave the one with Annie’s father and Ford open. Like I mentioned above, I was surprised at who did it and the motive behind it. Talk about a plot twist. I did not see it coming at all. And I loved it!! I am hoping that the author will write another book with Annie in it!!

I gave Exposed Fury a 4-star rating. This book was one of the best mystery books I have read to date. The author did a great job at keeping me engaged with the story. There were no dropped or forgotten storylines. I was surprised at the ending. I did not care for Ford or Annie’s father’s attitude.

I would give Exposed Fury an Adult rating. There is sex but it is not graphic (mentioned but no detail). There is language. There is violence. There are trigger warnings. They would be brain injuries, cheating on a partner, the death of a sibling. I would recommend that no one under the age of 21 read this book.

I would reread Exposed Fury. I would also recommend this book with family and friends. I would mention the triggers.

I would like to thank the author for allowing me to read and review Exposed Fury.

All opinion stated in this review of Exposed Fury are mine.

Have you read Exposed Fury?