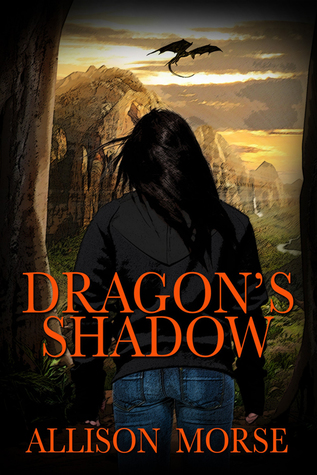 Where you can find Dragon’s Shadow: Amazon | Barnes and Noble

Kylie, a teenage science geek, has no faith in people. Instead, she relies on what she trusts the most, the facts––what she can see, touch, and hear but never feel. With enough pain to deal with in her own world, she is thrust into another––a kingdom at war whose strange inhabitants fear one thing the most––the return of the dragon. All of this is illogical to Kylie, but even more so, when she discovers she belongs there.

Her brother, Prince Jarlon, journeys to kill the dragon who has laid waste to his kingdom. His only hope for destroying the beast is help from his sister, whom he has never met. Will their paths cross before the beast’s malevolence infects Kylie and turns her into his creature or will Jarlon have to destroy her, too?

Kylie is home on a temporary leave from the asylum that her stepfather sent her to after the death of her mother. She is doing her best to fit into the mold that her school and stepfather wants her to be in. All Kylie wants is to be left alone and study science. Gifted an amulet shortly before her mother died, Kylie cannot figure out what it is. What she finds out exceeds her wildest imagination.

Prince Jarlon is the heir to the Hamadriad kingdom. Jarlon was raised by his uncle, the King after his father was murdered and mother disappeared. Jarlon is part of a prophecy that will start when he turns 18. He is content with learning to be the best swordsman and ambassador at his uncle’s side. Keeping peace between the shinwar, humans, and cortali is a balancing act and Jarlon is becoming good at it. But life has a funny way of throwing curveballs at you. His uncle was killed in an attack on the kingdom and everything that Jarlon had been told has been turned upside down. He learns that he had a twin sister and that she might be the downfall of his kingdom and The Order.  He also learns that if she cannot fight against the dragon’s influence, he will have to kill her. Jarlon sets out on a quest to kill the dragon and save his sister.

I liked Kylie and felt awful that she was hurting so bad after Leora died. Her anger and distrust at Richard came off the pages in waves. I also understood why she had a problem trusting people. How those kids treated her in school was awful. The only one who stood up for her was Matt. I could see why she believed what the Dragon was telling her.

Jarlon annoyed me. He decides to intervene with Tryffin when the crowd was going to send him to jail. He didn’t listen to his cousin when he was told to come with him. Instead, he ran to the King and saw his death. When the Lady of the Eyes decided to show him his past, he fought against it. I thought his ruse to get to Richard by posing as a slaver, with Tryffin as his slave, was good. But he gave the rouge shinwar the directions to the southern cortalis hidden village. I, along with Tryffin,  did a “WTF“. I know he thought he was helping but still. I did think that he was brave when he confronted the Dragon.

The main plotline with Kylie, her amulet and the Dragon was well written. There were some plot inconsistencies that I picked up on that made me go “EH” and scratch my head. I enjoyed the plotline and rooted for Kylie.

The plotline with Jarlon, Tryffin and the quest to find and kill the Dragon was wonderful as well. Again, there were some inconsistencies that made me scratch my head. But they were nothing that took away from my enjoyment of reading the book.

The end of the book was amazing. What Jarlon and Kylie were able to do together was not something I expected. While the main fight ended the way I thought it would, I wasn’t expecting Kylie’s decision. Also, the end of the book, made me wonder if there was going to be a sequel.

I gave Dragon’s Shadow a 3.5-star rating. This book was vividly written with a fantastic plotline. I did find some plot and character consistencies. Other than that, this was a book that I enjoyed reading.

I would give Dragon’s Shadow an Older Teen rating. There is no sex. There is no language. There is violence. There are some triggers. They are mental illness and bullying. I would recommend that no one under the age of 16 read this book.

I would reread Dragon’s Shadow. I would also recommend this book to family and friends. I would give a warning about the triggers.

I would like to thank RABT Book Tours for allowing me to read and review Dragon’s Shadow.

All opinions stated in this review of Dragon’s Shadow are mine.

Have you read Dragon’s Shadow

One thought on “Dragon’s Shadow by Allison Morse”