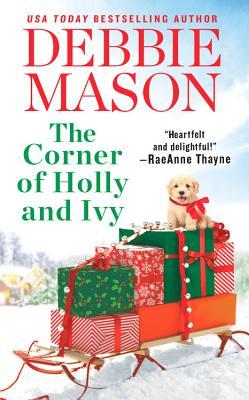 Where you can find The Corner of Holly and Ivy: Amazon | Barnes and Noble

Sometimes love is just around the corner . . .

With her dreams of being a wedding dress designer suddenly over, Arianna Bell isn’t expecting a holly jolly Christmas. Instead, her heart feels about three sizes too small. That is until her high school sweetheart Connor Gallagher returns to town and she finds his mere presence still makes her pulse race. But just when she starts dreaming of kissing under the mistletoe, he announces that he will be her opponent in the upcoming mayoral race…

Hot-shot attorney Connor Gallagher has something to prove. He’s tired of playing runner-up to his high-achieving brothers. So when the opportunity to enter the campaign comes up, he takes it. Even if it means running against the only woman he’s ever loved. But with a little help from Harmony Harbor’s local matchmakers and a lot of holiday cheer, Connor and Arianna may just get the happy ever after they both deserve.

I have read a lot of Christmas themed romances lately. I love reading these types of books. They get me in the mood for Christmas. Plus, they’re romances. And everyone knows how much I love romances. So when the publisher approached me to review The Corner of Holly and Ivy, I jumped at it. I was also excited to read a book by Debbie Mason. I have seen her books around the blogosphere but I never have had the chance to review one.

The Corner of Holly and Ivy is Arianna and Connor’s romance. Arianna was injured in a fire that destroyed half the businesses on Main Street, including her business. Harboring guilt over surviving the fire, she has sequestered herself in her house with her grandmother. Connor is an attorney who is back in Harmony Harbor after being blackballed by his ex-employer. Sparks fly when Arianna and Connor, who dated as teenagers, are forced to run opposite of each other in a mayoral race. Old feelings come back as they run against each other. But, Arianna has a secret. A secret that can threaten her and Connor’s love. Can they survive it?

I liked and pitied Arianna. She had been through so much before the book even started. The fire did a number not only on her body but on her self-confidence. She wasn’t able to do what she loved, designing wedding dresses. She was living in a state of depression until her grandmother forced her out of it by deciding to run for mayor. I loved her relationship with her grandmother. It was sweet and pure (as weird as that sounds). She would do anything for her Glamma. That includes stepping in for her when Glamma asked her. I also liked how she dealt with Connor and his being around more often. She didn’t want to fall back in love with him. She fought it. Her secret was heartbreaking too!!

I liked Connor. He was upfront with his feelings for Arianna right from the beginning. His distress at seeing her die and being brought back to life came off the pages. I also liked how loyal he was to his family. When Daniel had a “heart attack“, Connor was there to take over his mayoral campaign. I did think it was great that he was able to keep a sense of humor while running against Arianna. And he was in tune with his feelings for her.

I have to mention Glamma. I loved her. She was outspoken and she supported her granddaughter no matter what she did. I felt awful with what she was going through but I liked that she got a diagnosis. She was one of my favorite characters in the book. Her and Colleen. Colleen’s anger at Daniel and what she did to get back at him was hilarious. It was even funnier because she was a ghost and he had no flipping clue what was going on. Only Jasper and the cat.

I do have to mention Daniel. I didn’t like him. I thought he was a manipulator. What he did to his brother and his wife was unforgivable. But, he did get what was coming to him. I laughed that entire scene in the book. I might or might not have said: “You go Colleen“.

The secondary character in the book fleshed it out. They all had individual personality and quirks. I loved that these characters were so relatable (both secondary and main).

There were 3 major plotlines in The Corner of Holly and Ivy. What I enjoyed about the plotlines is that they went seamlessly from one to another. There is usually some choppiness when transitioning from plotline to plotline. Not here.

The first plotline was Arianna and Connor’s relationship, both past and present. I liked that while acknowledged, Arianna and Connor’s past relationship was kept in the past. I liked that the author had Connor work to be with Arianna. He had to show her that he wasn’t the jerk she remembered from her divorce. Just reading his escapades trying to win her over. I’ve gotta say that the puppy was perfect!!

The second plotline was Arianna’s relationship with her Glamma. I liked that Glamma was there for Arianna. She loved her unconditionally. She stepped up when Arianna’s mother didn’t. I sympathized with Arianna with Glamma’s issues with memory. I did laugh when Glamma asked Arianna to take over her campaign and her “help“. I loved it.

The third plotline was Arianna and Connor’s run for mayor. I wasn’t too sure how it was going to work out with them running against each other. I also wasn’t sure how much Daniel was going to be involved in Connor’s campaign. I thought the result of the election was hilarious and loved what the old mayor came up with. Then it was watching Arianna and Connor trying to one-up each other. I was a little surprised by the result.

The secondary storylines brought extra depth to the book. I loved the secret admirer one. I figured out who it was before it was revealed in the book. Arianna’s secret was another memorable one. I do wish that it had been introduced earlier in the book. I also didn’t like how her secret came out. It was heartbreaking and I don’t blame Connor for reacting the way he did. But still. She should have told him on her own terms.

There is no Instalove in The Corner of Holly and Ivy. While the main part of the story took place over a couple of months, Arianna and Connor’s relationship began when they were teenagers. I had no issue believing that they could fall back in love within a couple of months.

There was chemistry between Connor and Arianna was there. I liked that it didn’t overwhelm the book. I understood that they wanted each other. Instead of being in your face, it was subtle. Sometimes you need subtle. Which brings me to the sex scenes. They were not graphic. Actually, I didn’t quite grasp that Arianna and Connor had sex until the end of the book. Then I was like “WHEN. When did you have sex?”

The end of The Corner of Holly and Ivy seemed rushed. I was confused at how certain events went down and certain characters reactions. But, I did like it. The author did a great job of wrapping everything up. She did leave a couple of storylines unended. I am hoping that will be a sequel to this book.

I gave The Corner of Holly and Ivy a 4-star rating. This was a cute read that got me into the Christmas spirit. I was a little confused at the ending. I felt that it was rushed. But overall, it was a great book that I enjoyed reading.

I would give The Corner of Holly and Ivy an Adult rating. There is sex but it is not graphic. There is mild violence. There is language. I would recommend that no one under the age of 21 read this book.

I would reread The Corner of Holly and Ivy. I would also recommend to family and friends.

I would like to thank Forever, Grand Central Publishing, and NetGalley for allowing me to read and review The Corner of Holly and Ivy.

All opinions stated in this review of The Corner of Holly and Ivy are mine.

Have you read The Corner of Holly and Ivy?