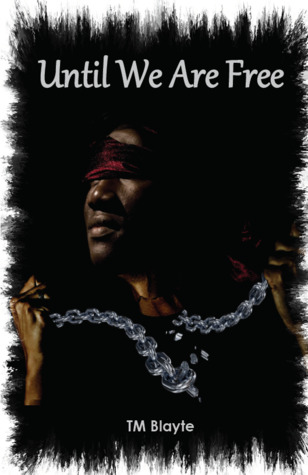 Where you can find Until We Are Free: Infinite Realms

Nyl Jayms is tasked with kidnapping the Elder princess, to force her brother, the king, to negotiate with humans. The alternative is a war that could lead to the annihilation of both humans and Elders.

A Rider Council faction, led by Nyl’s father, is opposed to any negotiations. They will do anything, including sabotaging his assignment, to trigger a war.

Nyl and his team have to outsmart the king’s elite Royal Guard, to get to the princess, and somehow stay one step ahead of the faction opposed to negotiations. Everyone will be forced to re-evaluate ideology they were raised with, as an impending war looms ever closer.

Join these élite rebel warriors on a journey of war, betrayal, and political scheming, in Until We Are Free. In this debut novel from TM Blayte, faces of friends, family, allies, and enemies will blur. Loyalties will be tested until the determination to be free becomes the only thing that matters. After all, does one person’s freedom mean another person’s oppression?

Nyl is a 16-year-old boy who has graduated from Rider Training Camp. The Rider Training Camp is where the rebels go to train their children to fight against the Elders. The Elders are an alien race that has taken over Earth. They have kept the humans living there under severe oppression. Nyl’s first mission out of Camp is one that has failed in the past. He needs to kidnap the Elder princess. The leaders of the Rebel faction were going to use her as a bargaining chip to gain their freedom. What Nyl and his friends weren’t expecting were other Riders sabotaging the assignment. War becomes a reality when the Princess escapes. But Nyl isn’t ready for the reality of war. He also comes to realize that the war isn’t exactly black and white. That friendship can change with war. And that you can’t always trust the people who you grew up with.

I liked Nyl. He was smart and he thought well on his feet. He picked up on what was going on with the council before his father told him. Well, he had some help from Tamira with that. What I liked is that while he was dedicated to the Rider cause, he began to see that how the Rider’s went about overthrowing the Elders weren’t the best way to get things done. It was the end of the book that showed how his character had grown. I am to see what he will do with what he knows in the next book.

I thought that the main plotline of Until We Are Free was interesting. It grabbed me from the beginning and kept my attention to the end. It was well fleshed out. I did have some questions about the Elders at the beginning of the book that were answered towards the end. I also had some questions about the different bloodlines that kept coming up in the book. But, again, they were answered at the end of the book.

I wasn’t sure what to think about the plotline with all the double-crossing going on within the Rider hierarchy. I did find it interesting that Nyl’s own father set him up to fail on the first mission. I also think that Nyl’s father knew what was coming at the end of the book. He didn’t seem that surprised by it.

I didn’t care for the bit of romance between Tamira and Nyl. It didn’t add anything to the book. Was it sweet? Absolutely. Was it needed? No. The book would have been just as fine if they didn’t hook up.

The end of Until We Are Free was eye-opening. The author did a great job at wrapping up most of the plotlines. He did leave the one with Nyl wide open. Considering what happened in the chapter before the end of the book, I wasn’t surprised. The twist at the end of the book with Mira’s mother was shocking. I cannot wait to read book 2!!

I gave Until We Are Free a 3.5 rating. This book was a good read. It was fast. The plotlines drew me in and kept me interested the entire book. I was sympathetic and liked the main character. The only thing I didn’t like was that there was a relationship between Mira and Nyl. Other than that, I enjoyed reading it.

I would give Until We Are Free an Older Teen rating. There is sex (not graphic). There is language. There is violence. I would recommend that no one under the age of 21 read this book.

I would reread Until We Are Free. I would also recommend this book to family and friends.

I would like to thank the author for allowing me to read and review Until We Are Free.

Have you read Until We Are Free?

One thought on “Until We Are Free (Until: Book 1) by TM Blayte”