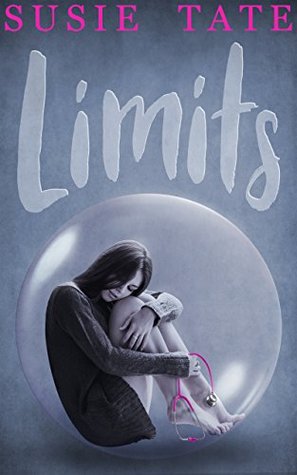 Where you can find Limits: Amazon

For as long as she can remember Millie has had her limits. Staying within them keeps her isolated, safe; helps her to cope. Why then have they started to feel so stifling? Why is her loneliness starting to rival her fears?

When she watches him she wishes she could be normal; she wishes she could be like the people he interacts with so seamlessly. Pavlos Martakis is her complete and total opposite: physically intimidating, likable, naturally attractive, extremely confident, sexually promiscuous: the most uninhibited, charming, outgoing and free person she has ever met in her life. He fascinates Millie; thrills and intimidates her in equal measure.

But, as the culprit behind the invention of her nickname Nuclear Winter, Millie knows that if Pav feels anything for her it is more than likely contempt. Cold, boring, robotic: that is how the rest of the hospital sees her. So she can safely watch him from afar. He would never notice her … would he?

When I saw the blurb for Limits, I was immediately intrigued. I was eager to read it. Unfortunately, life happened and I kept pushing Limits off to read. When I was finally able to read it, I was blown away. This book is so much more than what the blurb said it was going to be. I wasn’t expecting how much it made me cry. I ugly cried for about 90% of the book.

Limits is Millie’s story. Millie works in the radiology department of a busy hospital in England. Millie has isolated herself from all but a few of the staff. Her cold demeanor has earned her the nickname of “Nuclear Winter“. Pavlos is a newcomer to the hospital. He is everything that Millie isn’t. Outgoing, funny and people like him. He has heard of Nuclear Winter but has never met her. Until her friend’s engagement party. He is fascinated by Millie. He wants to know why she is so standoffish, why she keeps everyone at arm’s length. As he gets to know Millie, he realizes that she is anything but cold. Something happened to her to shape her into the anxiety-ridden, self-harming person that she became. And he wants to know what. Can he handle the truth? Can Millie finally let down her guard to trust Pav?

Millie broke my heart. I wanted to reach through the book and hug her. And also slap her parents for putting her through what they did as a child. Her social anxiety and panic attacks left her unable to connect to anyone outside of 3 people. Well 4, if you count her relationship with her psychologist. The nicknames that she got at work hurt her. What got me mad was that people didn’t even try to hide their contempt for her. That burnt me up. I loved seeing her working to be able to go out into the real world and interact with people. Her relationship with Pav paved the way with that. By the end of the book, I was crying happy tears for her. She deserved every bit of happiness that she got.

I didn’t like Pav at the beginning of the book. I found that he was as rude as the other people in the hospital when it came to Millie. When he asked her to present at the Grand Round, he was told no. He pressured her to do it and she did. And look what happened to her. Seeing her have an extreme panic attack finally clued him in that something wasn’t right with her. If he had only listened to Don. It was from that point on that I started to like him, though. He realized that he screwed up and he owned it. He also got to know Millie. He realized that behind her façade was a woman who deserved every good thing that happened to her. And he was determined to make that happen. I don’t know how he held it together when he saw how Millie’s parents treated her. I would have said a lot more than what he did. By the end of the book, he realized what his mistake (read the book!!) was going to cost Millie and swooped in to rescue her. Well, him and Gammy. That’s when I loved him.

I detested Millie’s parents. I wanted to go into the book and drop kick both of them. They screwed Millie up so bad it wasn’t even funny. Because her father who he was, they were able to pay off children’s services, fire and rehire nannies and get teachers fired when abuse was mentioned. It made me see red. Then they wonder why Millie didn’t have anything to do with them. Also, to hang her grandmother over Millie’s head like they did was awful. I was glad when they both got what they deserved. The end of the book, though, did tug at my heartstrings. Not going to say what but her father realized what he was missing all these years.

The other secondary characters were wonderful and fleshed out the plot. I did think that the sudden change from disliking to liking Millie was a little much. Not everyone had to like her. Other than that, they were wonderful. I loved the strippers. They brought some much-needed humor into the book.!!

The first major plotline in Limits was Millie, her struggle with social anxiety and panic attacks and what was the cause of them. I liked how the author introduced them into the book. I also liked that the author didn’t gloss over them or make them go away once Pav was in the picture. She showed what it was like to live with panic attacks. She showed what it was like to live with social anxiety. She showed that some people need therapy to help with their issues and guess what, its OK. She showed the ugly, nasty side and I love her for it.

The second major plotline was Millie and Pav’s relationship. Pav had to work extra to show Millie that he cared for her. Millie had to work on letting Pav in and trusting him. There were mistakes made. Their relationship wasn’t perfect but they made it work. And I loved reading that. Like I said above, Millie deserved every bit of happiness that she got.

As with the secondary characters, the secondary plotlines did their jobs and kept the book going. From Millie’s Gammy to her parents’ political bid to the book club, they all added to the main storylines.

There is NO Instalove in this book. Pav and Millie’s relationship started with them being at odds with each other. The author had them build a friendship and then a relationship. I loved it!!! Of course, they had sex. There was sexual attraction but a big deal wasn’t made of it. Same with the sex scenes. When Pav and Millie had sex, it wasn’t graphic and sweet.

The end of Limits was great. I loved that Millie’s parents got what was coming to them. I would have cheered but it was 11:30pm and everyone was sleeping so I did a fist pump instead. The epilogues (there were two) were fantastic. What happened in the first epilogue should have happened a long time ago. The second epilogue was bittersweet.

I gave Limits a 4-star rating. This book will tug at your heartstrings and it will make you cry while reading it. So, read with Kleenex or tissues nearby. The characters were relatable and I came to care for all but two of them.

I would give Limits an Adult rating. There is sex but it is not graphic. There is mild violence. There is language. I would suggest that no one under the age of 21 read this book. There are trigger warning that comes with this book. They are anxiety, panic attacks, emotional abuse, child abuse.

I would reread Limits. I would also recommend this book to family and friends. I would include a note about the trigger warnings.

I would like to thank Susie Tate and NetGalley for allowing me to read and review Limits.

All opinions stated in this review of Limits are mine.

Have you read Limits?

One thought on “Limits by Susie Tate”