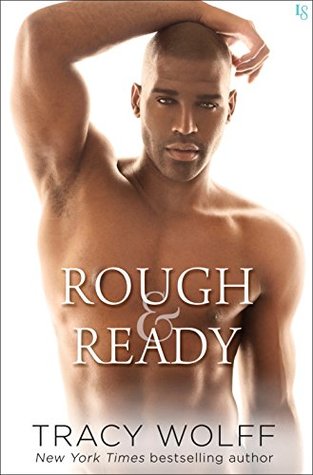 Where you can find Rough & Ready: Amazon | Barnes and Noble

Sparks fly between a football pro and an ex-WNBA player. But he needs to prove that he’s more than a sports hero if he wants it all in this steamy standalone from the New York Times-bestselling author of Down & Dirty and Hot & Heavy.

Tanner: I may be a baller, but I’ve always tried to do the right thing. Maybe it’s because I’ve been in charge of my four younger sisters for half my life, or because I understand how important it is to be a role model—something I learned from my grandfather, a Southern Baptist preacher who marched with Martin Luther King, Jr. Either way, my pro football career makes it easier to give back, so when a local rec center needs help, I do my best to even the playing field. And not just because Elara Vance, the smoking hot ex-WNBA player who runs the place, has me looking to score off the field.

Elara: Before I got sidelined by an injury, my time on the court taught me that pro athletes are all flash and no substance. Sure, Tanner Green talks a good game and wields a big checkbook, but I’m not buying the whole good guy routine. Still, it’s hard to miss all the good he’s doing for my rec center and even harder to ignore the way one look from him makes me tremble in all the best ways. I just wish I knew if he’s for real. Something tells me a little one-on-one might be the only way to find out. . . .

With their own sweet HEAs, Tracy Wolff’s red-hot Lightning novels can be read together or separately:
DOWN & DIRTY | HOT & HEAVY | ROUGH & READY

Or her standalone novel LOVEGAME

First impressions are always the best. Every book wants a cover that blows the readers socks off when looking at it. And this cover did knock my socks off, for the most part. Look at the model. He is exactly what I thought Tanner would look like. And he is major eye candy too. But, when I look at the cover, my eyes are drawn to his armpit instead of his eyes. Which is a shame because those eyes are gorgeous. But I can’t keep my eyes off the pit…sigh. I keep thinking “Is he going to turn his head and do a BO check?”

Rough & Ready are Tanner and Elara’s story. Elara is a former WNBA player whose career was ended when she suffered a knee injury. The rec center that she runs is her life. When a major backer doesn’t come through with a 15 million dollar donation and gives it to another foundation, Elara sees red. Tanner is a major league football player with a huge heart. Raising his 4 sisters after his parents’ deaths, he has become known as footballs nice guy. His foundation had received a 15 million dollar donation, which he was thrilled about. But when a tall, angry blonde walks into the locker room after a game and tells him off in front of the offensive line, Tanner wants to get to know her better. But Elara has severe trust issues after an abusive past relationship. Can she open her heart to Tanner and let him in? Or will her past not allow her to?

While I love reading about strong, independent women, I though Elara was a witch with a b. I know that 15 million dollars would have gone a long way with her rec center. To use her friend who works with the team to go to a game and then use that pass to bust into the locker room to freak out on him wasn’t cool. Not letting him defend himself wasn’t cool. Everything that she said in that tirade wasn’t cool. She let her temper run her mouth. But, as I got more into the book, the more I began to understand her. Elara was a fiercely independent woman. She was a woman who never fit into any molds that people tried to force her into. Because of that, she has become used to dealing with things herself. So her reaction to Tanner’s supposed “stealing” was normal. Her relationships with her kids at the rec center were sweet and showed a softer side. She also showed a more vulnerable side when she told Tanner about the abuse she experienced. By the end of the book, I was still on the fence about her, though.

Tanner was awesome. Yes, I am “Team Tanner“. He was a stand-up guy. What guy would take on raising 4 girls, all in various stages of being a teenager? His foundation brought sports to those who couldn’t afford it and it was in all 50 states. I thought that he handled Elara’s tirade perfectly. All he wanted was to put pants on and discuss things with her. He did end up discussing things with her but it led to so much more. When he lost his temper, he did it in the spectacular way possible. Also in the most public way possible too…lol.

I didn’t get a romantic vibe from Tanner and Elara’s relationship. There was zero romance. There was no build-up of the relationship. It went from her being mad at him to them being in a relationship. Normally, I would be fine with the lack of build up. But in this case, I was a little disappointed. I wanted to see Tanner woo Elara. I guess he did by donating to her rec center.

Even though the romantic vibe was missing, the chemistry and sexual tension were not. Tanner and Elara had crazy bunny sex everywhere. They were nonstop. What I liked is that the sexual tension didn’t die after their first hook up. Loved it!!

While the main storylines were ended, I did have an issue with the storyline about Elara’s ex being left up in the air. I wish the author had given some sort of ending to it. I did like that Tanner beat some sense into the guy but there was talk about exposing him. Then it was never brought back up. I wanted to know if justice happened.

I did like the end of the book. I liked that Elara and Tanner were able to talk about what happened and continue with their relationship. I was left feeling a bit unsatisfied. Like I mentioned in the previous paragraph, the whole storyline with Elara’s ex was left up in the air. I also wanted to see how Tanner’s sisters took to his relationship. I kinda wanted to see more of Tina too. She was sassy.

What I liked about Rough & Ready:

What I disliked about Rough & Ready:

I gave Rough & Ready a 3.5-star rating. The book was well written with compelling characters. The sex scenes were hot and I loved the end of the book. But, Elara killed the book for me in the beginning. Even though her character improved, I couldn’t get past the first scene. I also got no romantic vibe. Storylines were left up in the air.

I would give Rough & Ready an Adult rating. There is explicit sex. There is violence. There is language. There are a couple of scenes that discuss being raped and assaulted while drugged. Those could cause triggers. I would recommend that no one under the age of 21 read this book.

I would reread Rough & Ready. I would also recommend this book to family and friends. I would include a note about possible triggers.

I would like to thank Random House Publishing Group, Loveswept, and NetGalley for allowing me to read and review Rough & Ready.

All opinions stated in this review of Rough & Ready are mine.