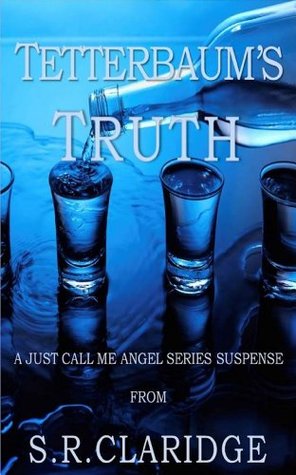 Traitor’s Among Us – Book 2

Where you can find Tetterbaum’s Truth: Amazon | Barnes and Noble

Angel Martin plans to marry Tony and live happily ever after until Tony disappears. Nursing a broken heart, she takes a job at Tetterbaum’s Pub, unaware it is the most prestigious Mafia hangout in Chicago. She finds herself suddenly caught in the middle of a revengeful scheme from a past she’s never known and a blackmail scandal that has left several dead, and she’s next on the hit list. Racing to find answers, Angel’s life is left hanging in a twisted balance of deception and revenge, and the only way out is to expose the truth… TETTERBAUM’S TRUTH

I am not normally a huge fan of Mafia-inspired thrillers but when I read the blurb for this book, I had to read it. I am glad that I did read this book because it was good. It was a little slow to start but once I got past the chapter explaining Angel’s background and her relationships, the book picked up steam. And the ending was excellent!!!

Tetterbaum’s Truth is the first book in the Just Call Me Angel series. Angel Martin has become content with her life. She owns a successful pub. She also has an on again/off again relationship with a man she only knows as Grayson. But that changes when she gets injured in a car accident that kills Grayson. Everything that Angel knew about herself and her past is revealed to be false. While she is coming to terms with who she is, she is also dodging hitmen. She is also trying to solve the mystery behind a massacre that turned the four Mafia families against each other. Who can she trust? Can she expose who was behind the massacre?

I couldn’t believe what Angel went through in this book. It was unbelievable. Car accident? Check. Finding out that she had a mysterious past? Check. Being stalked by strange men who wanted to kill her? Check. Getting kidnapped? Check. I kept thinking to myself “Her therapy bill is going to be HUGE“. I thought her reactions to Grayson’s death was a bit much. I mean, she demanded to see his body and then she broke into his house to cry. I got some serious obsessive vibes from her. On the flip side, I thought that her reaction to her past was fantastic. I would have acted the same way. Not believing until evidence is shown.

Andrew rubbed me the wrong way. When he was introduced in the book, I thought that something was off about him. He was always on the verge of saying something. I don’t understand why he didn’t tell Angel everything when he told her about her past and the danger she was in. Heck, he even put her in danger himself. There was a point in the book where I wondered what his deal was. Plus, I don’t like it when a guy calls a woman “sweetheart” if they aren’t in a relationship. It makes them sound condescending. Plus, putting a tracker on someone screams stalkerlike behavior to me.

I liked Grayson. He was mysterious and Angel couldn’t keep away from him. I was rooting for them to get together, even after it was revealed who and what he was. And, man, I was beyond upset when what happened. I threw down my Kindle and said a few choice words.

The secondary characters made this book. From Olga to Tony, they created a rich background for the story to be set against. They made Angel’s story much more poignant to read.

There were two major plotlines in Tetterbaum’s Truth. Both of those plotlines were filled with action and suspense. The author did a great job at keeping who Angel’s father Compare was. She also did a great job at keeping exactly where Tetterbaum’s tapes were. When the storylines were merged, they were merged in such a great fashion. I was scared for Angel at that point.

The first major plotline dealt with Angel and her past. While I didn’t like how she was told (Olga should have told her), I thought she did a fantastic job at processing everything that was told to her. I know that if it was me, I would have noped the heck out of there. I also loved her full name!!!

The secondary plotline dealt with the Mafia, Tetterbaum’s tapes and how Angel was going to right past wrongs. I learned more about the workings of the Mafia from this book than I ever knew. There were different terminology that I have never heard before. I also liked how the author had Angel figure out where Tetterbaum’s tapes were. I would have never thought to look where she did. I enjoyed how Angel got to the truth of what happened to her father and cleared his name.

Tetterbaum’s Truth fit right into the mystery/thriller/suspense genre. I liked how the author tried to throw in a bit of a love triangle in there. It will be interesting to see who Angel will end up with.

The end of Tetterbaum’s Truth was great. I liked how the author wrapped up all the storylines. I was surprised at who Angel’s Compare was. I was also surprised at the measure that he went through to get Tetterbaum’s tapes. But justice, Mafia-style, was served. I did a fist pump when justice happened. I was also surprised at what Angel did at the end of the book. Is she ready for that? I am eager to read book 2. Only because I have some questions that concern Andrew and Tony.

I gave Tetterbaum’s Truth a 4-star rating. I enjoyed reading this book. It was a fast-paced read that kept me on the edge of my seat. I didn’t like how Angel was continuously kidnapped or had guns held up to her head in the book. There are triggers in Tetterbaum’s Truth. They are extreme violence, kidnapping, and attempted rape.

I would give Tetterbaum’s Truth an Adult rating. There is extreme violence. There is language. There is sex, but not graphic. I would recommend that no one under the age of 21 read this book.

I would reread Tetterbaum’s Truth. I would also recommend this book to family and friends. I would tell them about the triggers, first.

I would like to thank the author for allowing me to read and review Tetterbaum’s Truth.

All opinions stated in this review of Tetterbaum’s Truth are mine.

Have you read Tetterbaum’s Truth?

One thought on “Tetterbaum’s Truth (Just Call Me Angel: Book 1) by S.R. Claridge”