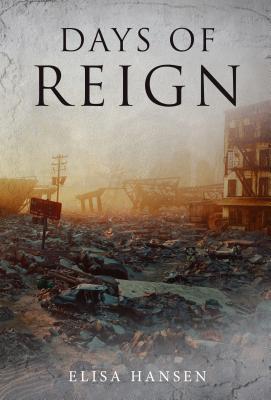 Where you can find Days of Reign: Amazon | Barnes and Noble

Zelenka is an outcast. Tormented by the harsh rules and punishments of Eldon, she will soon be imprisoned in the horrifying government factories. Her lover, the charismatic Fraco, may be her one chance to escape. But Zelenka is drawn to the dangerous and elusive world of the Amaryllians. Only through them can she triumph in her two dreams: freedom, and survival.

I was intrigued when I got the invite to review Days of Reign. The whole plotline of a girl trying to escape an oppressive regime caught my attention. I know that books like this in the dystopia genre are a dime a dozen but Days of Reign stood out from that crowd. This book had relatable characters and touched upon some real-life issues that we are facing today.

Eldon is a planet that is dying. Zelenka is a girl who has two choices in life. Either she marries by her 19th birthday or she risks going into a government-run factory. There, she will birth children until she dies. Zelenka is desperate to avoid that fate but she also wants to marry for love. Zelenka is also different from other girls her age. Zelenka has been taught to read and write, beyond what the government mandates for girls. Zelenka dreams of escaping Eldon. Her chance comes when she meets an intriguing woman named Fianna from Eldon’s sister planet, Amaryllis. After suffering a heartbreaking loss and enduring an attack by someone she thought she loved, Zelenka is ready to go. But, is Amaryllis all that it is cracked up to be? Will Zelenka find the freedom that she has craved?

I liked Zelenka. I also felt bad for her. The oppression that she lived under was stifling. But, somehow, she managed to thrive under it. She could read and write beyond what a woman in that society was allowed too. I felt that was amazing because her parents (and grandfather) took such a risk in educating her. She was hoping for a love match with Fraco to avoid being placed in the factories. I liked how she questioned her faith and wondered about Amaryllis. I was a little confused about exactly how she met Fianna. But that connection helped her when she needed to escape Eldon. Her wonder and amazement when she arrived in Amaryllis were exactly how I would have reacted. Considering the oppression that she left, Amaryllis was heaven to her.

I liked Fianna but I didn’t understand her role in the book for about half the book. Everything became clear after she and Zelenka landed in Amaryllis. What she was destined to do and who she was going to help. I do wish that it was revealed a bit earlier in the book. There were hints but still.

I didn’t like Fraco. I did pity him towards the end of the book but I didn’t like him. The things he did were heinous. But, he was a product of the male-dominated society of Eldon. He did what he thought was in his right.

As with every book, the secondary characters made the book. And with Days of Reign, they definitely added some much-needed depth to the storyline.

There were 2 plotlines in Days of Reign. Both plotlines were wonderfully written. They were also compelling. What got me was how some of the issues on both Eldon and Amaryllis reflected issues today. It actually scared me a little.

The first plotline centered around Zelenka in Eldon. It showed how awful her life was on Eldon. It showed how awful conditions were there. Take for instance her best friend, Sara. Her father sold her to a family as a communal bride (I know, right!!). When Zelenka went to visit Sara, she finds out that Sara committed suicide. It was one of two events that pushed Zelenka into leaving with Fianna. The other event, well, you will need to read the book to find out.

The second plotline is also centered around Zelenka. But she is in Amaryllis and discovering that living in Amaryllis is not what she thought. I shared Zelenka’s awe over everything that she saw and learned on Amaryllis. I wish I had a shower like she had.

There were a few secondary storylines that added to the story. Such as Zelenka’s writing and the storyline with Maeve. Those storylines added much-needed depth to the book.

Days of Reign fits in perfectly in the dystopian genre. It also fits in with the science fiction angle of the book.

I will warn that there are triggers in this book. They are rape, female circumcision and suicide. Not to mention that women are only looked at for sexual gratification and considered non-people. Like I mentioned at the beginning of the book, some of these follow different issues in real life.

The end of Days of Reign was confusing for me. Is there going to be another book? Because if there isn’t, a lot of storylines were left up in the air. If there is another book, it was brilliant of the author to end the book the way she did.

I gave Days of Reign a 4-star rating. This is a well-written book that I enjoyed reading. The characters were relatable and well-rounded. I did have an issue with how the book ended. Hopefully, there will be a book 2.

I would give Days of Reign an Adult rating. There is sex, but it isn’t graphic. There is violence. There is mild language. There are triggers (see above). I would recommend that no one under the age of 21 read this book.

I would reread Days of Reign. I would also recommend this book to family and friends. I would include a warning about the triggers.

I would like to thank RABT Book Tours for allowing me to read and review Days of Reign.

All opinions stated in this review of Days of Reign are mine.

Have you read Days of Reign?

3 thoughts on “Days of Reign by Elisa Hansen”