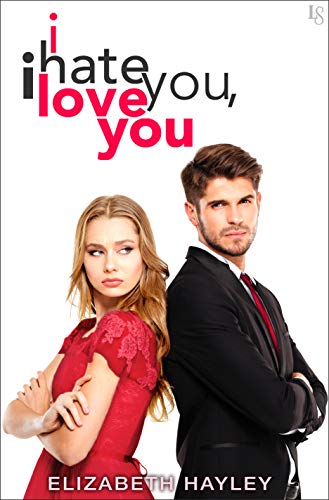 Where you can find I Hate You, I love You: Amazon | Barnes and Noble

There’s a fine line between love and hate. And these two can’t decide which side they’re really on. . . .

Poetry professor Naomi Price is loved by her students, happily works around the clock, and has credentials no one could deny. Except, it seems, for her arch-nemesis at Hainamor University. The man never has anything polite to say, and now the two of them are competing for a prestigious honor that just so happens to come with a cash award. With every move Naomi makes to impress her colleagues, her rival is right there beside her, elbow to elbow, making it impossible to ignore how devastatingly hot he is—even if he is a total bastard.

Sebastian Blake knows what Naomi thinks of him, and he’s trying hard not to care. Maybe he’s been grouchy with her in the past, but she isn’t making his life any easier with her crusade to win over the Personnel Committee and earn an honor that is rightfully his. Naomi just doesn’t quit, and though he’d never admit it, there’s something sexy about her. Something that has him tied up in knots. Something that makes him want to move beyond his painful past and take a chance—at least for as long as it takes to kiss her silly and see what happens next.

Ever read a book and think “Wow, I am going to like this” but reading the blurb? That’s what I thought when I first read the blurb for I Hate You, I Love You. I had this book built up in my mind. I started thinking to myself “Wouldn’t it be cool if this book was like 10 Things I Hate About You“. So, yeah, I was pumped up for this book. It was a disappointment when I started reading this book and realized that it was not what I thought it was going to be.

The first half of the book was a huge disappointment. I thought Naomi and Sebastian’s rivalry was immature. While Sebastian did start it (he could have handled Naomi’s gift a bit better), Naomi didn’t let it go. Instead of being the bigger person, she started acting childishly. Misplacing mail and messing stuff up on his desk? Really? I thought that she was an adult, not a vengeful teenager. What got me was that she thought she was justified in doing what she did. Sebastian was just as bad. The only thing was that he was verbal with his childishness. I kept shaking my head while reading those scenes. I said to myself during one scene “Are you freaking kidding me???” Then to have them competing against each other for a prize? Like my 12-year-old, my eye rolls were constant.

The second half of the book was a bit better but still. Naomi and Sebastian still were taking pot shots at each other.  But it was alright because they were dating. Uggggh. Then that whole debacle in front of the Personnel Committee. They both should have been fired for acting the way that they did.

I didn’t like Naomi. She rubbed me the wrong way. While I felt bad for what happened when she was in college, she should have told Sebastian what she was going to do with the money up front. It would have saved her a lot of heartache down the road. I wish more attention had been put on her teaching. I thought what she taught was interesting. Once her and Sebastian were an item, I did think that she had a dry and sarcastic sense of humor. I wish that I could have liked her more.

I felt awful for Sebastian. I could never imagine something like that happening to me. No wonder he was so grouchy. But, I do wish that his past had been explained earlier in the book. Instead of being dragged out the way it was. I also liked that he didn’t stoop down to Naomi’s level when she was being petty. I did like his zingers but I felt that he crossed a line a couple of times with what he said to Naomi. I felt that his issues with what she was going to do with the prize money should have been addressed before they went before the Personnel Committee. But, I did like that he was able to accept that he was wrong. And that he tried to make it up to Naomi. What he did at the end of the book made me cry.

The end of the book was the best part of the book. The author was able to end it on a HEA. As much as I disliked Naomi, I felt that she needed to be supported by her decision. I also felt the Sebastian needed to have a happy ending too. I do wish that there was an epilogue. I would have loved to see them in a year or two from the ending.

What I liked about I Hate You, I Love You:

A) The location. I love Vermont.

B) What Naomi taught

What I disliked about I Hate You, I Love You:

A) Naomi. Felt she was childish

B) Zero chemistry between Naomi and Sebastian

I gave I Hate You, I Love You a 3-star rating. I was disappointed by this book. I felt that the main characters had zero chemistry. I also felt that they acted like spoiled teenagers for 90% of the book. What saved the book for me was the location and the end of the book.

I gave I Hate You, I Love You an Adult rating. There is explicit sex. There is language. There is mild violence. I would recommend that no one under the age of 21 read this book.

I would like to thank Random House Publishing Group, Loveswept, and NetGalley for allowing me to read and review I Hate You, I Love You.

All opinions stated in this review of I Hate You, I Love You are mine.