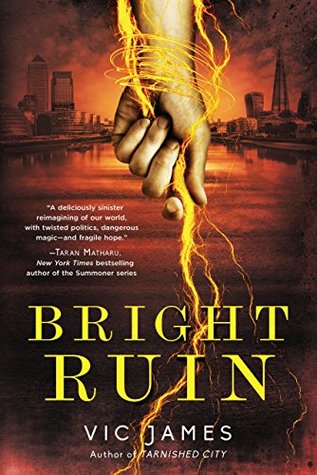 Where you can find Bright Ruin: Amazon | Barnes and Noble

Magically gifted aristocrats rule–and commoners are doomed to serve. But a rebellion threatens the old order. The dystopian trilogy that began with Gilded Cage and Tarnished City concludes.

In a world where the lower classes must endure ten years of forced service to unfairly advantaged, magically powered rulers, a teenage boy dreams of rebellion, his older sister yearns for love and knowledge, and a dangerous young aristocrat seeks to remake the world with his dark gifts. In Bright Ruin, the final book in the trilogy set in modern-day England, our heroes will lead a revolution that will transform–or destroy–the world.

This book. Has left me. Wordless. Talk about having everything turned upside down and inside out. I can’t even get my thoughts together to write a review that makes sense…lol. But I will try.

I was excited to read Bright Ruin. I had loved the previous two books in the Dark Gifts trilogy and I was expecting to feel the same about Bright Ruin. Which I did. But this book also left me with a what the heck feeling. Why? Because of the ending. But I will get to that later in the review.

Out of all the characters in the book, I thought Gavar shined in this book. His character development from Gilded Cage was amazing. He went from being a pawn of his father to someone who decided to shake off the yoke of oppression that he lived under. I did have my doubts about him while reading Bright Ruin. I had doubts about his allegiances. But, I came to realize that the only one he was loyal too was Libby and through association, Daisy. That everything he did in Bright Ruin was to safeguard them. Of course, he was doing it under duress but still.

I didn’t like Abi as much as I did in the first two books. I don’t know why I didn’t. I do think that she saw something in Gavar that surprised her. She saw goodness and the potential to help instead of harm. Which is why she trusted him with the plans to help break her parents out of where they were being held. Which is why she didn’t blame him for what happened when she found out the truth. I did like the change in her from the first book. She went from someone who accepted what life was thrusting at her to someone who dared to change things. That change was electric. A big part of that change was Jenner’s betrayal at the Blood Festival. But the other half of that change happened when things went sideways when her parents were rescued. Those events shaped her into who she became at the end of the book.

I thought Luke was useless in this book. Until Silyen took him to Crovan’s island. Then I realized, hey he is useful. I thought his relationship with Silyen was one of master and slave. But, as I read Luke’s part of the book, I realized that Luke was providing Silyen with something. I didn’t know what. Like I mentioned above, I was shocked at the kiss between them. But, I was also shocked by what Luke did at Silyen’s request. That took more bravery than anyone in the entire book. But, like I said above, I should have known it was coming. That whole death scene with the King was a huge indicator of what was going to happen. I failed to see it.

I want to mention how much I liked Dog in this book. I loved that the author gave him a voice and a purpose in this book. I also liked that his humanity was showing more and more. It counteracted nicely with what I knew about him.

It was the last chapter that bothered me. Luke’s storyline was not resolved. As was Coira’s, the King’s and Silyen’s. To end the book the way it did make me go “WHHHHHYYYYYY????” I can only hope that the author is going to do some sort of sequel to Bright Ruin. Something that explained what happened.

What I liked about Bright Ruin:

B) The kiss between Luke and Silyen

What I disliked about Bright Ruin:

A) What Silyen asked Luke to do

B) The end of the book

I gave Bright Ruin a 4-star rating. This is a fantastic dystopian book. The characters were well fleshed out and the world building was amazing. I did have an issue with the ending. Other than that, loved the book.

I would give Bright Ruin an Older Teen rating. There is no sex (other than that amazing kiss between Silyen and Luke). There is violence. There is mild language. I would recommend that no one under the age of 16 read this book.

I would reread Bright Ruin. I would also recommend this book to family and friends.

I would like to thank Random House Publishing Book-Ballantine, Del Ray, and NetGalley for allowing me to read and review Bright Ruin.

All opinions stated in this review of Bright Ruin are mine.