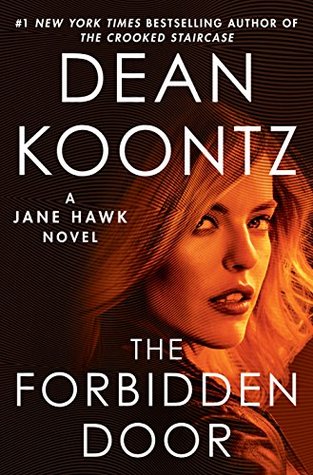 Where you can find The Forbidden Door: Amazon | Barnes and Noble

When this relentless rogue FBI agent comes knocking, her adversaries will have to answer—with their lives—in the latest thrilling Jane Hawk novel by the #1 New York Times bestselling author of The Silent Corner.

“We’re rewriting the play, and the play is this country, the world, the future. We break Jane’s heart, we’ll also break her will.”

She was one of the FBI’s top agents until she became the nation’s most-wanted fugitive. Now Jane Hawk may be all that stands between a free nation and its enslavement by a powerful secret society’s terrifying mind-control technology. She couldn’t save her husband, or the others whose lives have been destroyed, but equipped with superior tactical and survival skills—and the fury born of a broken heart and a hunger for justice—Jane has struck major blows against the insidious cabal.

But Jane’s enemies are about to hit back hard. If their best operatives can’t outrun her, they mean to bring her running to them, using her five-year-old son as bait. Jane knows there’s no underestimating their capabilities, but she must battle her way back across the country to the remote shelter where her boy is safely hidden . . . for now.

As she moves resolutely forward, new threats begin to emerge: a growing number of brain-altered victims driven hopelessly, violently insane. With the madness spreading like a virus, the war between Jane and her enemies will become a fight for all their lives—against the lethal terror unleashed from behind the forbidden door.

I am not going to go on a crazy fangirl but I love me some Dean Koontz. I have fangirled in earlier reviews and in hindsight, it made me look like a nerd. So, yes I love Dean Koontz. And yes, I have read almost every single book that he has written. That includes what he was written under his pseudonym and excludes any books written from 2007-2017.  I have enjoyed reading the Jane Hawk series. So when I saw that The Forbidden Door was up for review, I jumped on it. And did a happy dance when I got accepted.

The Forbidden Door is the 4th book in the Jane Hawk series. Jane is trying to get to her son after learning that her friends died protecting him. Her son is safe with an autistic genius. A genius who is nervous about being in charge of a child but determined to protect him as much as he can. While she is traveling to get her son, the Arcadians are searching for her in-laws. They want to adjust Nick’s parents and use them to find out where Jane’s son is. They think that if they have the son, then they will be able to bring Jane to her knees. But, that is not the case. Nick’s parents have become ghosts and force the Arcadians to search for them. The Arcadians also have another huge issue, besides Jane trying to take them down. Recently adjusted people are being driven insane. They are committing heinous crimes. Can Jane reach her son before the Arcadians? Can the Arcadians contain the epidemic of adjusted people going insane? Will the Arcadians find Nick’s parents?

What I liked about The Forbidden Door:

I loved Jane. She was as fresh and as complex as she was in the first 3 books. I like that the author chose to highlight her maternal instinct. I also liked how he balanced it with her need to find justice for Nick’s and all the other adjusted people’s deaths. Her interactions with Luther, Bernie, Travis, and Cornell were awesome. Plus, I liked seeing a heroine that wasn’t afraid to use shady connections to help her.

I was so happy to see Luther make an appearance in the book. I had missed him in book 3. I was wondering what happened to Rebecca, Jolie, and Twyla (and yes, I am still tickled that I see my name in a book!!). My wondering about them wasn’t answered. I was glad to see that Jolie was safe. It was Rebecca and Twyla that was my concern. I wanted to know where they were. I am hoping that my questions are answered in book 5.

I loved that Cornell was in this book. I liked that the author went more into his background and his autistic tendencies. I liked, that in spite of his limitations, that he was able to hide Travis for as long as he did. His terror at taking care of Travis made me sad for him. He was afraid that he was going to fail him. He was a gentle giant.

Travis was a remarkable kid. It didn’t seem like all the upheavals that went on in his life affected him. The only sign I saw was when he called Jane “Mommy” instead of “Mom“. I am wondering if his character will be in book 5 and what will happen to him.

There were 3 major plotlines in The Forbidden Door. What I enjoyed was that the author was able to bring them all together at the end of the book. I also liked that none of them were resolved. None. It made me very excited about book 5!!

The first plotline is the one involving Jane and her trek to get Travis. She revisited some familiar people. She also made some new allies. Ferrante was a remarkable one. His obsession with blood skeeved me out. What he asked Jane to do got me even more skeeved.

The second plotline involved the Arcadians and their search for Nick’s parents. I loved it because I had no clue where they went. That ending chapter, when all was revealed, was interesting. I am hoping that this plotline is revisited. I want to know what happens to Egon.

The third plotline involved the Arcadians and the people that they adjusted going insane. This plotline was introduced late in the book. I am curious to see what is going to happen with that. Will all the adjusted people start going insane? Or just the ones recently infected?

What I disliked about The Forbidden Door:

There were a few things that I didn’t like about The Forbidden Door.

I did not like the Arcadians. The single-mindedness that they showed to their cause. They kept using the brain-altering drug even though they knew that it was driving people insane. They turned almost a whole town to track Travis down. And how did that turn out? Not so great for their cause. I also didn’t like how Laurie was treated by Janis. And man, Janis’s psychotic break. It was awful.

I did think that the storyline with the Arcadians hunting down Nick’s parents was a bit drawn out. While I understand why it went on for so long, I started to get bored by it.

The end of The Forbidden Door was great. None of the storylines were ended. Instead, they were all left up in the air. Normally, I would be complaining about this. But because there is going to be a book 5, I know that the storylines will be ended in that book. So, it is fine with me.

I gave The Forbidden Door a 4-star rating. I liked the plotlines and the characters. The only thing that I didn’t like about The Forbidden Door were the Arcadians. I also thought that storyline about them hunting down Nick’s parents dragged on for longer than it needed to.

I would give The Forbidden Door an Adult rating. There is no sex. But there are scenes that discuss child sexual abuse and one man contemplating raping a child. There is violence. There is a disturbing scene where a man is attacked and his chin is almost bitten off. There is language. I would recommend that no one under the age of 21 read this book.

I would reread The Forbidden Door. I would also recommend this book to family and friends. I would include a warning about possible triggers (see above).

I would like to thank Random House Publishing Group – Ballantine, Bantam, and NetGalley for allowing me to read and review The Forbidden Door.

All opinions stated in this review of The Forbidden Door are mine.