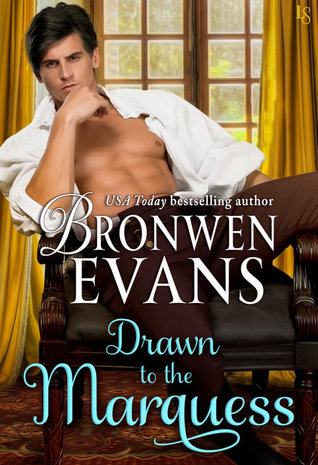 Drawn to the Marquess – Book 2

Where you can find Drawn to the Marquess: Amazon | Barnes and Noble

Destined to go blind, a rake sets his sights on the toast of society, lighting a fire of passion that scorches the night, in this captivating novel from USA Today bestselling author Bronwen Evans.

Stephen Hornsby, the Marquess of Clevedon, has one goal: to see every exquisite thing he can before he goes blind. His greatest joy, watching a woman shuddering in the throes of passion, will be gone. But before the darkness descends, he is determined to seduce a magnificent widow, Lady Penelope Fisherton. Unfortunately, his rakish reputation has preceded him; Lady Penelope spurns his advances. Being a man who relishes a challenge, however, her reluctance adds only luster to his desire for the last beautiful sight he’ll ever see.

Considered the belle of London society, Lady Penelope was married to a scoundrel who cared for no one but himself. Now that she’s free, she wants nothing to do with love, passion, or desire—emotions that abandoned her with a cruel husband. So why does her body react when Stephen smiles? As much as she’d like to avoid the rogue, her brother-in-law wants her fortune, and he’ll kill to get it. Stephen is willing to help, but he’ll take only one thing in return: Her. In his bed.

I enjoyed reading Drawn to the Marquess. What I liked the most about this book was that the characters were damaged. Stephen was going blind. Penelope was a battered wife. The author was able to take what happened to these characters and turn them into strengths. This book was nowhere as dark as the earlier book, Addicted to the Duke but it was dark enough for me.

There were things that I didn’t like about Drawn to the Marquess. I didn’t like how no one knew that Stephen had issues with his eyes. He couldn’t see anything off to the side and couldn’t see in low light. Wouldn’t that have been an issue when he was at balls? Because electricity hadn’t been invented yet and candlelight is dim. But, Penelope figured it out soon after meeting him? Didn’t make sense to me. I am sure that his mother and sisters would have noticed something. Because of what their father went through years ago. The other main thing was Penelope not telling Stephen about her husband’s death until after the Frenchman hinted about it. While I could understand her reluctance and embarrassment. But still. Stephen was working to clear her name and he finds that out. I would have been furious too.

I did connect with Penelope. I understood what she went through after her husband died. I also understood her absolute horror and disgust when she found out what he was doing. I wouldn’t have been so….restrained….in my response to that. I wanted to hug her and tell her that it wasn’t her fault. That he hid it well. But, she also annoyed me a little. As I stated above, I thought she should have been more upfront about her husband’s death to Stephen.

I liked Stephen but I also pitied him. I couldn’t imagine knowing that I was going to go blind and seeing my vision go. I understood why he wanted to experience everything. He wanted those memories of what a sunset was like before he went blind. I even understood why he didn’t tell his family about going blind. He didn’t want to put his mother or sisters through that again.

While I figured out what role Penelope had in her husband’s death about halfway through, I was still surprised by it. It wasn’t exactly what I thought. As soon as she realized what a monster her husband was, she went out to take care of it. As she should have. Those people were her responsibility and she lived for 6 years without knowing what was going on. To me, that made her a hero.

The sex scenes were fantastic. Penelope was a wildcat in bed, once she realized that she could get pleasure from it. I loved the scene where she started describing what was going on while Stephen and she were having sex. That upped the hotness factor for me (and them).

The chemistry and sexual attraction between Penelope and Stephen didn’t go away after the first time. The author kept that amped up for the entire book. Even in the epilogue, all he had to do was look at her in a certain way and her toes curled. Loved it!!!

The end of the book was great. Stephen showed such courage when he went after Penelope. I thought the scenes after everything had happened was awesome. The author did a fantastic job at ending all the storylines. One storyline, which was a minor one, got wrapped up in the epilogue. I had tears in my eyes when I realized that both Penelope and Stephen had their HEA. I am also looking forward to book 3!!

What I liked about Drawn to the Marquess:

A) Characters were relatable

B) The connection I felt with both Stephen and Penelope

What I disliked about Drawn to the Marquess:

A) Stephen not letting people sooner about his eyesight issues

C) Penelope’s husband (what she found out he did).

I gave Drawn to the Marquess a 4-star rating. I enjoyed reading this book. I felt a strong connection to both characters. The storyline was great and easy to follow. I did have some issues with Penelope and Stephen but that didn’t factor into my rating.

I would give Drawn to the Marquess an Adult rating. There is explicit sex. There is violence. There is mild language. I would recommend that no one under the age of 21 read this book.

I would reread Drawn to the Marquess. I would also recommend this book to family and friends.

I would like to thank Loveswept, Random House Publishing Group, and NetGalley for allowing me to read and review Drawn to the Marquess.

All opinions stated in this review of Drawn to the Marquess are mine.

2 thoughts on “Drawn to the Marquess (Imperfect Lords: Book 2) by Bronwen Evans”