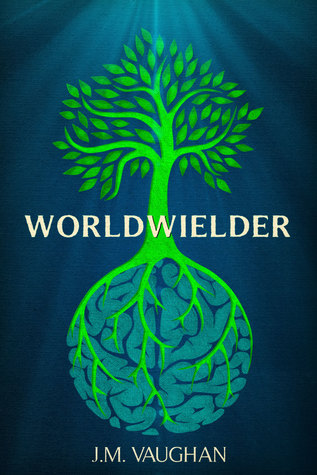 Where you can find Worldwielder: Amazon

Melissa Mabrey isn’t like other sixteen-year-olds. From the time she was four, she’s been able to see the colors of people’s minds, colors that reveal to her their true feelings, desires, and fears. She’s only met one other person who’s like her—her best friend Kyle. But two years ago, Kyle mysteriously disappeared, and she hasn’t heard a word from him since.

Until today. In a book carried by a stranger, Melissa finds a desperate plea for help from Kyle. Following his clues, she’s hurtled from our world into the Gallery, a gateway to millions of worlds. Each world is entered through a painting, and each has a different “pull” on the minds of its occupants. There are pulls that make people grow calm in the face of peril, or flee from shadows in terror or kill each other or forget things forever.

But for Melissa, there’s nothing scarier than the unknown, and now she must traverse countless perilous worlds to find Kyle, fending off ruthless barbarians, the Gallery Guard, and her friend’s captors. Along the way, she’ll discover the truth about what she and Kyle are—a truth so terrifying her life will never be the same.

If you have read this blog for any amount of time, then you know how much I love fantasy and Young Adult. As much as I love those genre’s, I have found myself wanting when trying to find a combination of the two. Don’t get me wrong, I have read some awesome fantasy/YA books. But they are few and far between. So when the author approached me with a request to review Worldwielder, I almost declined. Then I read the blurb and my interest was caught. I thought to myself “Hmmm, this book could good.” And guess what, it was!!

Worldwielder is the story of Melissa. Melissa is different from other girls (and boys) her age. She has a special talent. From the age of 4, she has been able to see the colors of people’s minds. Through that, she is able to see their true feelings/desires/fears. When she was younger, she told her parents what she saw. That lead to years of doctors and therapy. But it eventually ended with her parents treating her like she was making everything up. The only bright thing in her life was her friend, Kyle, who shared the same abilities that she did. But Kyle disappeared 2 years ago. His disappearance and her actions afterward furthered the divide between herself and her parents. Things change when Melissa reads a message in a book from Kyle. A message that is pleading for her help. Melissa must overcome her self-doubts and rescue Kyle. She will also find out that her talent is not what she thought it was. That it was the tip of the iceberg. Can Melissa rescue Kyle?

I felt awful for Melissa. She had it tough at home and at school. She couldn’t get over Kyle leaving. She was so depressed at the beginning of the book that I wanted to reach through the book and hug her. Reading about her home life made me sad. No child should feel like that. I did think that she was obsessive about Kyle, though. But, if I were in her shoes, I probably have done the same thing at 14. I loved seeing her character blossom in this book. In the beginning, she was antisocial and tried to drive people (mainly Brock) away. But, towards the end of the book, she was able to rely on people for help and learned to accept the help offered. She also learned that sometimes her best friends were the ones that were sitting right under her nose the entire time.

I didn’t feel as connected to Kyle as I did to Melissa. But, I did think that it was a smart move on the author’s part that he slowly leaked information about Kyle. It was Melissa’s memories of Kyle that painted the picture of a boy who was kind and gentle. Which was the complete opposite of what I read later in the book.

Brock annoyed me as much as he annoyed Melissa in the first few chapters of the book. He didn’t know when to stop. He was too laid back too. I can’t believe I said that about a secondary character…lol. But, after she met up with him in the last half of the book, he grew on me. He showed that he was a true friend to Melissa by his actions.

The fantasy angle of the book was excellent. I loved the world building that went into the book. Each world had layers to it, which I enjoyed. I do wish that more time had spent on a couple of worlds. Other than that, I loved it. I also enjoyed how Melissa was able to get from world to world. Accessing them through a painting was a great idea.

Melissa’s talent was interesting too. I liked how she was able to tell the moods/feelings/desires from the color of people’s minds. But what I liked the most was that was only the tip of the iceberg with her. What she was able to do after meeting up with Ringo and getting that book was amazing. I also like that her power was connected to the “pull” of the planet. It made for some interesting scenes in the book.

The young adult angle of the book was great too. Melissa acted her age, which was refreshing. I have read books where there the main characters were supposed to be 16 and they acted 20. So to have a teenage character actually act like a teenager was refreshing to read.

The end of Worldwielder was good. I wasn’t expecting Kyle to be how he was. It was a bit of a letdown for me to read that. I also didn’t think that his mother would give up so easily. The storylines were all wrapped up and ended in a way that satisfied me as a reader. I do wonder if a book 2 is going to be in the works. Because there is so much that I need to know. Mainly about the Worldwielders. I also want to know about the other worlds that Melissa could sense.

What I liked about Worldwielder:

A. The plotline. It was original

B. The fantasy angle

What I disliked about Worldwielder:

B. I didn’t feel as connected to Kyle as I should have felt

C. How Kyle was in the last half of the book.

I gave Worldwielder a 4-star rating. This is a solid Young Adult/fantasy book. The storyline was interesting and engaging. The characters, I felt connected too (except for Kyle). This is a book that would be right for teenagers 16 and older.

I would give Worldwielder an Older Teen rating. There is no sex. There is violence. There is no language. I would recommend that no one under the age of 16 read this book.

I would reread Worldwielder. I would also recommend this book to family and friends.

I would like to thank the author for allowing me to read and review Worldwielder.

All opinions stated in this review of Worldwielder are mine.

One thought on “Worldwielder by J.M. Vaughan”