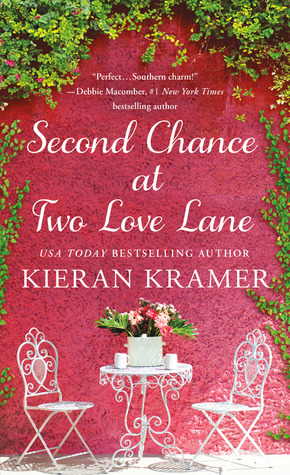 Where you can find Second Chance at Two Love Lane: Amazon | Barnes and Noble

From USA Today bestselling author Kieran Kramer comes Second Chance at Two Love Lane, a fast-paced tale about the intoxicating effects of fame and what happens when a past romance is rekindled behind the silver screen.

Sometimes love is waiting in the second act…

In her professional career, Ella Mancini plays matchmaker at Two Love Lane but, in her personal life, she takes the stage at the Dock Street Theatre. Now she has a chance at a new role in a Hollywood movie that happens to be filming in Charleston—one that features a big-name actress, Samantha Drake. Long ago, Ella passed up a major audition while awaiting a marriage proposal. Not only didn’t she get the role; she never got the ring, either. Instead, her boyfriend Hank went on to become a huge film star…leaving her, and all her dreams, behind.

But now Hank’s back in Charleston, cast as the male lead in the same movie Ella’s in. In spite of the dramatic tension off-screen, he and Ella try to stay cool onset. But when their old feelings start to heat up—at the same time leading-lady Samantha tries to play Cupid—all bets are off. How can Hank convince Ella, after all this time, that she’s the one he really wants to be within real life—and that some happy, rom-com endings really can come true?

The plot of Second Chance at Two Love Lane was simple. Ella is a matchmaker. She is also an actress who failed to make it big. She turned down the role of a lifetime because she thought her long-term boyfriend was going to propose. Not only did he not propose but he ended up becoming an A-list movie star. Ella is bitter over that. She also has never gotten over Hank. Imagine her surprise when she finds out that he is in Charleston filming and he is the cousin of her new friend, Pammy. Hank is able to get Ella a small part on his movie. Soon, they are reconnecting. Ella wants to keep Hank at arm’s length. But it doesn’t happen. Can she let go of the past to embrace the future? Or will she be left behind and heartbroken, again?

Ella got on my nerves. I know suddenly ending a relationship sucks, I have been there myself. But to hold onto it for 10 years. A little excessive, if you ask me. I know her heart was broken but still. I kept breaking out (in my head) “Let it go“. I did like her, though. Her relationship with her mother, sisters, cousins, and nonnas was amazing. Not to mention her friends. She had a huge heart.

I didn’t know what to think of Hank. He didn’t like being a superstar. All he wanted was to be left alone….which wouldn’t happen because he’s famous. But as the book went on, I started to like him. He wanted to make things right with Ella. He didn’t know how to make things right with her. Getting her that small part in his movie was part of that. I started liking him by that point. He wanted more from Ella but he wasn’t going to push her into anything she didn’t want. He knew that she was still dealing with her feelings from 10 years ago. By the end of the book, I was crushing on him hardcore. If I had any doubts about his feelings for Ella, they went away by the ending.

The chemistry and sex scenes with Hank and Ella were lukewarm. I couldn’t get into those scenes as much as I wanted to. I didn’t get a hint of chemistry between them which reflected in the sex scenes. Don’t get me wrong, they were beautifully written. They didn’t do it for me.

The secondary characters made this book. Mainly Miss Thing. When I first saw her name, I thought “Maybe its a typo“. But no, it isn’t. I loved her!!! I also liked Samantha and Pammy. Samantha made me laugh with her not so subtle ways of trying to get Hank and Ella together. That whole dinner that she set up cracked me up. I loved Pammy too. She was refreshingly real. From her telling Ella that she had a nice butt (which cracked me up) to her unlikely romance with the mayor of Charleston, she made me laugh.

I also liked Ella’s family. They were large, loud and they love each other. It was the sub-storyline about Ella’s mother that made me tear up. I wasn’t expecting it. Neither was her mother or Ella.

The end of Second Chance at Two Love Lane was your typical romance novel ending. I did like what Hank did to Ella. Tied in perfectly with the book. The author did a great job of taking all the sub-storylines and tying them into the main storyline. I was not left wondering about anything. Which happens more often than I can count.

What I liked about Second Chance at Two Love Lane:

A) The secondary characters

What I disliked about Second Chance at Two Love Lane:

A) Ella. She got on my nerves up until she got the part in the movie

B) The chemistry and sex scenes were lukewarm

C) Hank. I was iffish about him most of the book.

I gave Second Chance at Two Love Lane a 4-star rating. This was a cute romance with relatable characters. While I did not like Ella or Hank at the beginning of the book, they did grow on me. My only major complaint is that the sex scenes were lukewarm. As was the chemistry between Hank and Ella. Other than that, I liked the book.

I gave Second Chance at Two Love Lane an Adult rating. There is sex. There is mild violence. There is language. I would recommend that no one under the age of 21 read this book.

I would reread Second Chance at Two Love Lane. I would also recommend this book to family and friends.

I would like to thank St. Martin’s Paperbacks and NetGalley for allowing me to read and review Second Chance at Two Love Lane.

All opinions stated in this review of Second Chance at Two Love Lane are mine.