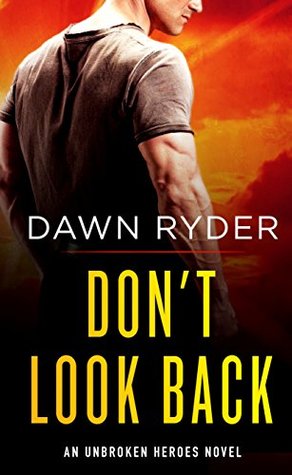 Where you can find Don’t Look Back: Amazon | Barnes and Noble

In Don’t LOOK BACK by Dawn Ryder, she is the only woman worth fighting – or dying – for…

Shadow Ops Agent Thais Sinclair has sworn off falling in love for good. It’s what’s kept her calculated, steady, and on-task in a world dominated by men. She needs nothing and no one but her own wits and strength to guide her. But when she’s slated to shadow the one man who could reveal their entire operation, all bets are off.

Dunn Bateson, the illegitimate son of a Southern debutante, has always had to fight harder than the rest to get what he wants. Now, the last thing he needs is Thais following his every move. She is so strong, sly, seductive. . . No woman has ever captivated him so completely. Thais may only have room for her mission in her heart, but is Dunn up to the challenge of showing her that she’s worth every risk he is willing to take?

Don’t Look Back justifies my dislike of picking up books mid/at the end of the series. What I dislike even more is being confused by a book. And I was confused by this book. I would have been fine if the focus was on Dunn and Thais. Maybe a secondary main plotline about Carl’s evil doings. Instead, I got a book that was told from many points of views. I got many storylines going on. I was confused by where Thais’ storyline was going and what the Shadow Ops wanted to be done with her. I could go on and on but you get the drift with where I was going.

My other problem with the book was that there was no distinction when the POV’s changed. I kept going back and rereading the previous paragraph because I got confused. There would be a scene between Thais and Dunn and it would change to Kagan or any of the Shadow Ops and then would change to Carl and then change back to Dunn or Thais. All within the same chapters. Something like this (*****) would have been great. It would have made reading Don’t Look Back go so much smoother than it did. I did keep in mind that I was reading an ARC but still. Very annoying.

The Thais and Dunn’s sex scenes were fantastic. I liked that Thais didn’t want to be treated like a fragile doll. She liked it a little rough. I also liked that Dunn was able to provide that and more to her.

The end of the book was a confusing mess. There was too much going on. Also, the very ending threw me. I had an issue imagining what happened happening.

What I liked about Don’t Look Back:

A) Thais and Dunn’s sex scenes. They were awesome

B) Thais and Dunn’s backstories were fascinating

What I disliked about Don’t Look Back:

A) Too many POVs’

B) No distinction when POV ended and went to a different one.

C) The ending was a confusing mess.

I gave Don’t Look Back a 2-star rating.  I couldn’t get involved with the characters. There were too many POVs’. There was no distinction between POVs within the same chapter. And the ending was a confusing mess. I did like the sex scenes, but that is about it.

I would give Don’t Look Back an Adult rating. There is explicit sex. There is graphic violence. There is language. I would not recommend anyone under the age of 21 read this book.

I would not reread Don’t Look Back. I also would not recommend this book to family and friends.

I would like to thank St. Martin’s Paperbacks, St. Martin’s Press, and NetGalley for allowing me to read and review Don’t Look Back.