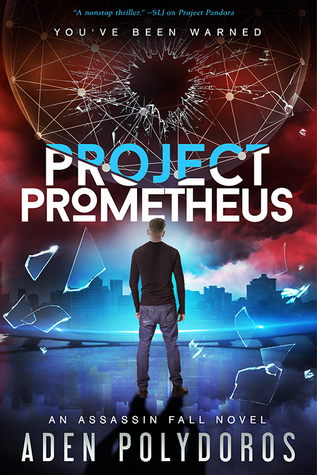 Where you can find Project Prometheus: Amazon | Barnes and Noble

The Academy stole everything from Hades, their perfect assassin. Angry and leaving bodies in his wake, he finds two other ex-assassins doing the same thing.

Tyler and Shannon once killed for The Academy. Now they’re tracking and hunting down its scientists. So why is The Academy only after Hades?

Shannon will do whatever it takes to protect Tyler, even if it means teaming up with a former rival. While she seeks answers to her past, Tyler wants to learn the truth about the mysterious white room, which no one has ever seen except him.

As for Hades? He simply wants revenge.

They all need answers, even if it means returning to the organization where it all started.

Excited didn’t even begin to come close to what I was feeling when I saw that book 2 in the Assassin Fall series was up for review.  I had read and reviewed Project Pandora and was sucked right into the world that was created. A world that was intense and surreal. A world where teenagers were trained to be the perfect assassins. A world that was flawlessly carried over to Project Prometheus. So, yes, I was excited.

Project Prometheus starts off shortly after the end events of Project Pandora. Hades was taken from the hospital and is being held in the basement of Six’s father’s house. Tyler and Shannon are tracking down the scientists that worked for The Academy. After Hades takes care of business with Six’s father, he tracks down the other scientists to get answers. Will they get the answers that they want? Will Hades get his revenge? You need to read the book to find out.

Hades is one of the most charismatic characters that I have read to date. His personality came off the page. I wondered as I read the book if Six hadn’t been killed if he would have been as focused on revenge. Part of me says “No” but a big part of me says “yes“. He loved Six and would have done anything for her. His reaction to her death was exactly what I thought it would be. He became cold-hearted. But, underneath that cold exterior, you could see peaks of a decent person coming through. Just a peak, here and there. It gave me hope.

Tyler was an enigma. After he was shot, I was expecting him to die. Instead, he defied the odds and lived. His memories of that white room piqued my interest. And his terror at that one Dr chilled me to the bone. Out of the 3 teenagers, Tyler was the more relatable to me. He connected with Caroline, even protecting her when the gunfight happened. I wish that more information was given about the white room and Project Prometheus. I have a feeling that he is going to be even more dangerous than Hades.

Shannon was a loyal friend (or is it girlfriend??) to Tyler. She had some interesting flashbacks too. Makes me wonder if she is part of another project. Her loyalty to Tyler was insane. She went out of her way to make sure he got medical attention when she could have dumped him at a hospital. She found Dr. Miller, a scientist who worked at The Academy and forced her to administer aid to him. I can’t wait to see where the 3rd book goes with her.

Dr. Miller shocked me. I was not expecting the two major bombshells that went along with her plotline. One, I should have seen coming. Because of the hints that were given in both books. But the other one blew my mind away. It actually made me a little sad to see her go down that road. Only because I got a glimpse at a different person than what was exposed.

The end of the book was a whirlwind of activity. I am not going to go into the ending but I will say that there was a huge twist. A twist that I am not too sure if I am completely happy with it. Guess, I’ll have to read book 3 to find out what is going to happen.

What I liked about Project Prometheus:

A) Hades. I kinda had a crush on him

What I disliked about Project Prometheus:

A) Just base information is given about the white room

C) Dr. Miller. Was NOT expecting what happened with her storyline

I would give Project Prometheus an Older Teen rating. There is no sex but there are sexual situations. There is language. There is violence, some of it graphic.

I would reread Project Prometheus. I would also recommend it to family and friends.

I would like to thank Entangled Publishing, Entangled Teen, and NetGalley for allowing me to read and review Project Prometheus.

All opinions stated in this review of Project Prometheus are mine.