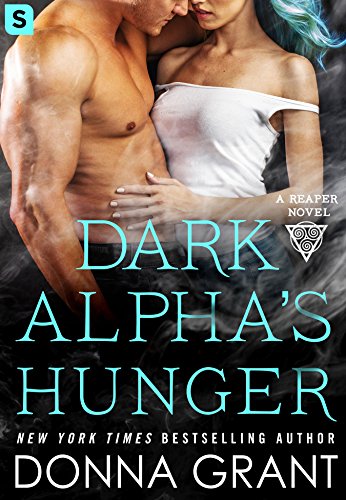 Where you can find Dark Alpha’s Hunger: Amazon | Barnes and Noble

Dark Alpha’s Hunger is the sixth paranormal romance novel in New York Times bestselling author Donna Grant’s Reapers series featuring a brotherhood of élite assassins who wage war on the Fae at Death’s behest–and the women who change their hearts.

There is no escaping a Reaper. I am an élite assassin, part of a brotherhood that only answers to Death. And when Death says your time is up, I’m coming for you…

Where Death leads, I follow. Nothing will stop me from my duty – not even the darkness that claims me. It’s the music that leads me from the dark, returning me to my brethren and a new foe that has risen. Learning who hunts Thea could be the key to unraveling what we need to know to defeat our enemy. The Half-Fae’s music stirs a passion within me that I’ve never known. For her, I will break my vow of silence. For her…I will risk everything.

I had heard of the Reaper series but I hadn’t gotten around to reading any of the books. So when the publisher approached me to review this series, I decided, why not. Even though it is the 6th book in the series, I figured I could follow the plot. Which I did, kinda. The author kept bringing up earlier characters and their relationships. At one point, I couldn’t keep everything straight in my head. Other than a few quibbles that I had with characters, I enjoyed reading Dark Alpha’s Hunger.

I thought that Eoghan and Thea’s relationship started off odd and stayed a little odd. It was almost stalkerish since Eoghan decided to follow Thea around until he revealed himself. The only connection that he had with her was through her music. When she played her violin, he could find her. I thought it was a little creepy. Once they were together, they had great chemistry which bled over to fantastic sex.

Speaking of the sex scenes, these were hot. The chemistry between Eoghan and Thea was off the charts. I had to fan myself a few times. If it could, my Kindle would have steamed up.

I felt that Thea got the stick end of things during the book. First, she brings Eoghan back from the darkness. Then she is semi-stalked by him until he shows himself. Then her biological mother kidnaps her and lays a lot of crap on her. That girl needed a stiff drink and a hug by the end of the book. She had been put through the wringer. I did like that she was an accomplished violinist. I loved how music pulled her from a crippling depression at an early age and gave her purpose.

Eoghan’s backstory killed me to read. No wonder he chose to take a vow of silence. I would have too if I had been put through what he went through. I didn’t get why Death told him to rescind his vow of silence until the end of the book. Then it hit me in an “AHA” moment. I liked his relationships with the other Reapers. There was an instant bond between them.

The end of the book was interesting and laid a definite foundation for the next book.

What I liked about Dark Alpha’s Hunger:

A) The chemistry between Eoghan and Thea

C) Eoghan’s relationship with his other Reapers

What I disliked about Dark Alpha’s Hunger:

A) Had an issue following the plot at first

B) The start of Eoghan and Thea’s relationship

I would give Dark Alpha’s Hunger an Adult rating. There is sex. There is language. There is violence. I would recommend that no one under the age of 21 read this book.

I would reread Dark Alpha’s Hunger. I would also recommend it to family and friends.

I would like to thank St. Martin’s Paperbacks, St. Martin’s Press, and NetGalley for allowing me to read and review Dark Alpha’s Hunger.

All opinions stated in Dark Alpha’s Hunger are mine.