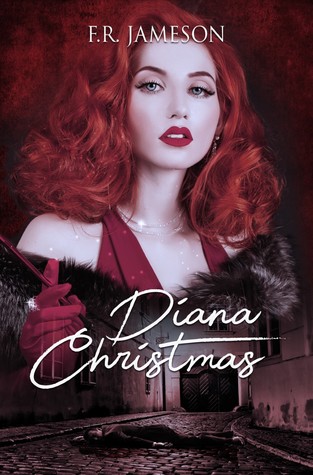 Where you can find Diana Christmas: Amazon

In 1959, Diana Christmas – the beautiful, vivacious redhead – was a major star in Britain. It was her moment. She was on the cusp of making it big in Hollywood. Then, she simply walked away from the limelight. Vanished from an industry that adored her.

Twenty years later, Michael, a young film journalist, arrives at her suburban home and discovers the still vibrant and alluring Diana. Between her sheets, he hears for the first time the reason for her disappearance – a tale of coercion, shame, and blackmail.

To his shock, he learns that those who destroyed her career and ruined her life still have their claws in her.

Totally smitten, he promises to help her. But Michael soon finds that the past doesn’t let go easily…

Diana Christmas – A new thriller of desire and betrayal from F.R. Jameson.

Thriller Noir is a newer genre for me to read and review. While I have heard of it, I have seen thriller noir films and I was intrigued by a book form of the movies I have seen. I was glad that I accepted to request to review Diana Christmas. This book was an homage to the black and white thriller noir films that I watched as a child/teen.

Diana Christmas was a vivacious redhead who was about to make it big in the late 50’s Hollywood when she walked away from it all. She vanished. 20 years later, in the late ’70s, Michael tracks her down. An aspiring film journalist, he is thrilled at the chance to meet and interview Diana. He did not expect to end up in bed with her. He also did not expect for her to reveal the true reasons why she walked away from it all or that she is still being blackmailed. Michael, believing he is in love, decides to take it upon himself to help Diana get her blackmailers off her back. But Diana Christmas is not what she seems.

Michael was one of the most naïve characters that I have read to date. I liked him but I wanted to shake some sense into him. He put himself into situations that made me mentally shake my head and go “Why would you do that“. Don’t even get me started on his relationship with Diana. That relationship was doomed from the start. He fell in love with her too quickly and she, well, she was not a very nice person to him. Actually, that is an understatement. She cost him everything.

I didn’t like Diana from the minute she was introduced in the book. She saw that Michael was this naïve young man who actually knew who she was and decided to use him. I went from not liking her to hating her in the middle of the book. What she put Michael through was despicable. I was happy when she got what was coming to her at the end of the book. She deserved everything that happened to her.

The ending of Diana Christmas wasn’t a happy one. It was genius of the author to end the book in that way. It was full of regret, self-loathing and a slight undercurrent of bitterness. Which was a perfect ending for this book.

What I liked about Diana Christmas:

A) It was a new genre for me to read

C) The ending. Refreshing to read a book where everything wasn’t ended happily

What I disliked about Diana Christmas:

B) Michael (yes, I liked and disliked him)

C) Almost too fast-moving for a book

I would give Diana Christmas an Adult rating. There is sex. There is language. There is violence. I would recommend that no one under the age of 21 read this book.

I would recommend Diana Christmas to family and friends. I would also reread this book.

I would like to thank the author for allowing me to read and review Diana Christmas.

All opinions stated in this review of Diana Christmas are mine.

One thought on “Diana Christmas by F.R. Jameson”