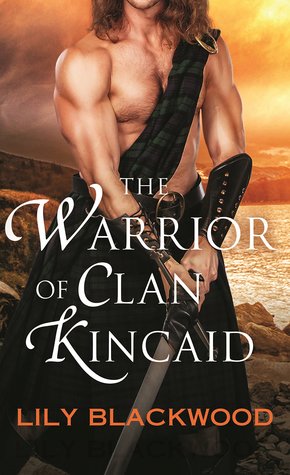 The Beast of Clan Kincaid – Book 1

The Rebel of Clan Kincaid – Book 2

The Warrior of Clan Kincaid – Book 3

Where you can find The Warrior of Clan Kincaid: Amazon | Barnes and Noble

Derryth MacClaren is on the run. Traveling under heavy guard, she has been sent from her castle home to avoid capture by the vicious nobleman known as the Wolf, who has vowed revenge against the Clan Kincaid, and any who support them. When a surprise attack leaves her vulnerable, Derryth ends up in the hands of an enemy warrior who claims her, with the Wolf’s blessing, as his prize. But her captor’s gentle words and touch seduce her heart—and body—completely…and when she discovers the tattoo on his arm that proves him to be the legendary, long-believed dead son of the murdered Laird of Kincaid, Derryth knows she must find a way to alter his fate—and her own.

Cull has no memory of his family or past—all he knows is the life of a warrior, trained to fight on behalf of the Scottish king. If he can help the king’s law officer of the North, the Wolf of Badenoch, defeat a rebellious faction of Highlanders, Cull will be met with untold riches beyond possessing beautiful, innocent Derryth. But now that she has informed him of who he really is—Cullen Braewick, the youngest son of the slain laird—he is torn. If Cull exacts revenge against the Wolf, who executed his father, he stands to lose the precious lass who he has come to love. What is he willing to sacrifice for Derryth to keep her safe…and in his arms?

I have a love of all things Scottish. Heck, BK, my SO, can trace his roots back to Dundee, Scotland (2nd generation Scots on his mother’s side). I love historical romances based in Scotland and/or have Highlander’s. Ever since I had read Heather and Velvet by Teresa Medeiros, I have been hooked. So when I read the synopsis for The Warrior of Clan Kincaid, I thought “Right up my alley“. And guess what, it was.

I liked the plotline of The Warrior of Clan Kincaid. Cull was indebted to the Wolf. The Wolf rescued him from a slave ship in the Mediterranean when he was a child and trained him to a warrior. Cull rose through the ranks to fight for the Scottish King. He also is loyal to the Wolf. When the Wolf says that he has the king’s permission to move on the current Laird Kincaid, Cull doesn’t think twice. Derryth is being sent back to her stepmother to keep her safe as the battle looms. But she wasn’t safe. She was captured by Cull on the journey to her stepmother. She starts to develop feelings for Cull. It is after one magical night that she realizes who Cull is. Can she convince him to join his brothers in battle and embrace his birthright? Or is he too in debt to the Wolf to break free?

I liked Derryth. I loved seeing her transformation from a selfish little girl to a poised young woman. When she was first captured by Cull, I did get a laugh when she started using her wits to keep Cull away from her. I thought her drenching his side of the bed with cold water was funny. When she was held by the Wolf, she used her wits to keep one step ahead of the Wolf. She also revealed to Cull who he was and set that chain of events in motion. I admired her by the end of the book.

I felt awful for Cull. He was a slave until he was 12 when he was rescued by the Wolf. Then he was trained to fight for the King. But he was also used to do the Wolf’s dirty work. Work that included waging battle on the Kincaid’s. He didn’t particularly want to do it. He wanted a rest but if the Wolf said jump, Cull asked how high. All he wanted to was to find a place to belong. A sense of self. He had insecurities from being “Nameless“, which is what the King dubbed him. Which is why Derryth was good for him. She made him think about the future.

The Wolf was an evil SOB. When he revealed why he ordered the execution of the former Laird of Kincaid, I got queasy, then angry. Love does strange things to people. What was even more messed up was that he knew where Cull was and he let him SUFFER for 5 years. The Wolf should have been hung up by his nads for that one. I loved the afterward. The author explained that he was a true historical figure and what happened to him the last night of his life. Poetic justice!!!

I felt that there was little build up to Derryth and Cull’s romance and relationship. It moved too fast for me. I like at least some romance before the characters start having feelings for each other.

The sex between Derryth and Cull was super hot. Even though there was a lack of romance, it didn’t mean that there was a lack of sexual attraction. The author waited and banked on that attraction until it exploded between them. Even better, the sex was great for the rest of the book. There wasn’t one sex scene that was great and then the rest were stagnant. Nope, all the sex scenes were fantastic.

The end of the book was great. I did have some issues believing that Cull embraced his family as well as he did. Other than that, I loved it. I loved that justice was served at the end of the book and in the afterward!! I do wish that another book would be written about Ainsley. I would love to see what her story would be.

What I liked about The Warrior of Clan Kincaid:

A) Set in Scotland and had Highlanders

C) Derryth. Her transformation was great

What I disliked about The Warrior of Clan Kincaid:

A) The Wolf. He was an evil SOB

B) Little romantic build up for Derryth and Cull

C) Had a hard time believing that Cull embraced his family as well as he did in the book.

I would give The Warrior of Clan Kincaid an Adult rating. There is explicit sex. There is violence. There is no language. I would recommend that no one under the age of 21 read this book.

I would reread The Warrior of Clan Kincaid. I would also recommend this book to family and friends.

I would like to thank St. Martin’s Press, St. Martin’s Paperbacks, and NetGalley for allowing me to read and review The Warrior of Clan Kincaid.

All opinions stated in this review of The Warrior of Clan Kincaid are mine.

One thought on “The Warrior of Clan Kincaid (Highland Warrior: Book 3) by Lily Blackwood”