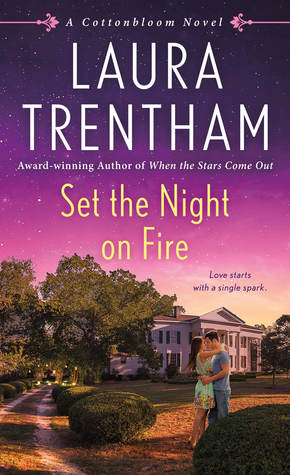 Leave the Night On – Book 4

When the Stars Come Out – Book 5

Set the Night on Fire – Book 6

Where you can find Set the Night on Fire: Amazon | Barnes and Noble

Cottonbloom is the perfect place for starting over, finding your way back home–and falling head over heels. . .

Ella Boudreaux has a lot to prove to her family, friends, and foes–and to herself. So when her marriage ends she decides to invest her energy and money into a place that brings back some of Ella’s happiest memories: the Abbott brothers’ garage. Maybe, if she puts her mind to it, she can teach skeptical, stubborn Mack Abbott how to make the business a true success. Which would be a lot easier if the hunky mechanic didn’t make her motor run quite so fast…and hot.

Mack was furious when his brother, Ford, sold his share of the business. He’s in no rush to team up with a wealthy divorcee who shows up to the garage in stilettos–and the longest, sexiest legs he’s seen in forever. But Ella’s grit and determination won’t quit…and soon Mack can see that she’s been down a few rough roads herself. Neither Mack nor Ella can deny the fierce attraction that’s revving up between them. Could it be that true love has been in the back seat all along…and they’ve finally found the key?

I am not going to get into my complaints about reading books out of sequence if they are in a series. I keep accepting them, so my complaints are void at this point. But, it does show talent if the author can take book 6 and make it completely stand alone. That is one of the things I enjoyed about Set the Night on Fire. The other hight points of this book were how it tugged on my heartstrings and how the main characters were completely relatable. Of course, there were aspects that I didn’t like but they didn’t affect my review in a huge way. Mack’s 180 change on how he felt about Ella, Ella’s ex-best friend and husband, and the whole mystery behind Mack’s mother leaving I didn’t care for. But, I enjoyed reading Set the Night on Fire.

Set the Night on Fire is a cute, fast-moving romance set in the town of Cottonbloom, Louisiana. Ella moves to Cottonbloom to start over again. Recently divorced from an abusive excuse for a man, Ella has something to prove. Mack is the owner of a successful garage. He is furious that his brother sold his shares to a stranger. That anger grows when he realizes that the new part owner of the garage is a woman. An attractive women who match him step for step. He soon realizes that Ella is much more than she seems. Ella realizes that behind Mack’s gruff exterior is a kind, passionate man. Can Ella help Mack overcome traumas of his past? Can Mack help Ella realize that not all men are like her ex?

When I started reading Set the Night on Fire, I was expecting some parts of the book not to make sense to me. I mean, this is book 6 the Cottonbloom series. So, I was surprised when the author explained Ella and Mack’s shared backstory up front. There were some vague references made to other books but it wasn’t enough to make go scratch my head and go “How does this relate to the book“. I loved it. I was able to enjoy reading Set the Night on Fire without wondering what happened in the other book. It also made me want to read the other books in the series.

I liked Ella. From the first scene, when she was parked outside the garage, I thought there was something about her that stood out to me. The more the author got into her backstory, the more I liked her. She had a hellacious childhood that left her with a severe phobia of dogs. She also survived a marriage that was abusive. She wouldn’t allow herself to be backed into a corner. She also had one of the biggest hearts that I have seen in a book. She took in the woman who was her ex-husband’s mistress (now wife) when he started abusing her. She stood up to her ex when he showed up at her house, demanding where his wife was. She organized a charity drive for a couple that she barely knew but felt compelled to help. I 100% related to her.

Mack was a huge grump at the beginning of the book. I understood why he was so mad but his anger was misplaced. I thought him making Ella do an oil change on the car was low because he thought she couldn’t do it. But the more into the book I got, the more I realized that Mack had his issues. He was dealing with the death of his father the year before. He was also dealing with his brother, Ford, selling his share of the business to a stranger (and a woman). Plus, he was still dealing with his mother upping and leaving him and brothers when he was younger. When I found that out, I thought to myself “Well, no wonder he was grumpy. I would be too“. By the middle of the book, though, Mack was on his way to dealing with everything. I also loved how he dealt with Ella’s ex-husband. I cheered when that scene happened!!

This book definitely tugged on my heartstrings. There were times when I was crying along with Ella and Mack. Not going to say what scenes but if you read the book, then you know what I mean. One word: Cookies (read the book to find out).

The other thing that I liked was how relatable that the characters were in this book. The author made them as realistic as she could for fictional characters. Even the main characters had their issues. I liked was that she wasn’t afraid to tackle issues like postpartum depression, spousal abuse, cancer, and parental alienation. It made the book much more real for me.

There were parts of the book that I didn’t like. I didn’t like how Mack’s feelings for Ella turning from dislike to love so fast. It didn’t ring true to me. Also, I didn’t like how Ella’s ex-husband felt like he could walk right into her house and continue with his abusive behavior. I know that it mimics real life but I didn’t like. I also didn’t like that her ex-bestie felt that she could call on Ella to save her. I wanted to shake her and say “Sister, she WARNED you about him.”. My last complaint was how long and drawn out it was to get the story behind Mack’s mother’s abandonment. I didn’t like it <shrug>. I felt that it could have been dealt with sooner in the book.

Ella and Mack’s romance was hot and fast. I was surprised at how fast it was. They also had incredible chemistry together. The sex scenes were out of this world hot. My poor Kindle almost couldn’t take the heat.

I liked the end of the book. I do feel that there were enough storylines left unended for a 7th book. Which I would be very interested in reading.

What I liked about Set the Night on Fire:

A) Can be read as a standalone

B) Tugged on my heartstrings

What I disliked about Set the Night on Fire:

A) Mack’s feelings changing for Ella so suddenly

B) Ella’s ex-best friend and husband.

C) The mystery behind exactly why Mack’s mother left

I would give Set the Night on Fire an Adult rating. There is explicit sex. There is mild violence. There is language. I would recommend that no one under the age of 21 read this book.

There are trigger warnings for Set the Night on Fire. They are postpartum depression, spousal abuse, cancer, addiction, and parental alienation. If you are triggered by any of those, I would recommend not to read the book.

I would reread Set the Night on Fire. I would also recommend this book to family and friends.

I would like to thank St. Martin’s Paperbacks, St. Martin’s Press, and NetGalley for allowing me to read and review Set the Night on Fire.

All opinions stated in this review of Set the Night on Fire are mine.

One thought on “Set the Night on Fire (Cottonbloom: Book 6) by Laura Trentham”