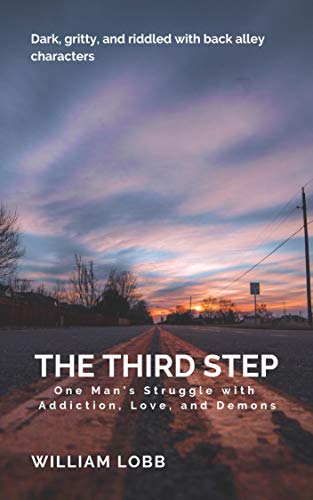 Where you can find The Third Step: Amazon | Barnes and Noble

Dark, gritty, and riddled with back alley characters, The Third Step is one man’s journey into the black recesses of his own soul…
Meet Frankie, a young, disaffected amateur boxer, really more of a punching bag, a drunk, and a drug addict. He is a loser at love, except for his relationship with his grandma, who, rumor has it, is a white witch. She, along with a handful of others, serve as his moral compass.

Frankie fights a lifelong struggle to find an understanding of the creator of the universe, not the poisoned caricature painted by the church and the “holy” people who seem to torment him.

His journey takes him from the East Coast down to New Orleans to face confrontations with his demons, both real and imagined. Along the way, the story is littered with tales of drug smuggling, murder, an affair with a woman who may be the devil herself, and an ultimate quest for revenge.

Frankie comes to terms with his addictions, but his search for a deeper understanding of this God entity and his need to connect with his soul could be his ultimate addiction, one that may follow him beyond the grave…

The Third Step is a raw, gritty book that follows a young man as he deals with addiction, failed relationships, and a struggle with religion. Frankie does questionable things with his life. Things that include drug smuggling, murder, being involved with a girl who is disturbed and revenge. As Frankie starts spiraling out of control, he heads to New Orleans. It is there that he finds the strength to deal with his demons head-on.

Frankie was not a likable character and I am not going to pretend to like him. He did some despicable things in the book. Awful things. But, there were moments where you could see what type of person he could have been. That is what made this book so compelling and what kept me reading it.

I didn’t like The Third Step. But it was a compelling read and I had to finish it. I had to find out what happened to Frankie. It drew me in.

Now, why did I give The Third Step a 4-star rating if I didn’t like the book? Like I mentioned, the book was a compelling read. It was also very well written. Frankie’s angst over everything came across very clearly.

The end of the book bothered me. It wasn’t what I expected.

I am not going to do a like/dislike section because I was so conflicted.

I would give The Third Step an Adult rating. There is sex. There is violence. There is language. I would recommend that no one under the age of 21 read this book.

I would reread The Third Step. I would also recommend this book to family and friends.

I would like to thank the author for allowing me to read and review The Third Step.

All opinions stated in this review of The Third Step are mine.

One thought on “The Third Step by William Lobb”