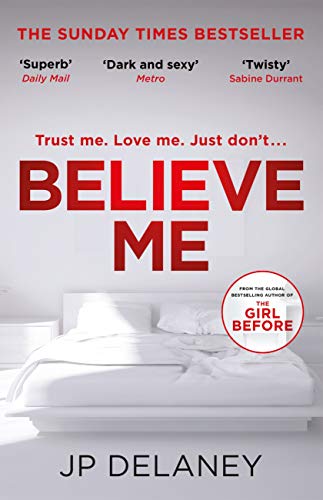 Where you can find Believe Me: Amazon | Barnes and Noble

In this twisty psychological thriller from the New York Times bestselling author of The Girl Before, an actress plays both sides of a murder investigation.

A struggling actor, a Brit in America without a green card, Claire needs work and money to survive. Then she gets both. But nothing like she expected.

Claire agrees to become a decoy for a firm of divorce lawyers. Hired to entrap straying husbands, she must catch them on tape with their seductive propositions. The rules? Never hit on the mark directly. Make it clear you’re available, but he has to proposition you, not the other way around. The firm is after evidence, not coercion. The innocent have nothing to hide.

Then the game changes.

When the wife of one of Claire’s targets is violently murdered, the cops are sure the husband is to blame. Desperate to catch him before he kills again, they enlist Claire to lure him into a confession.

Claire can do this. She’s brilliant at assuming a voice and an identity. For a woman who’s mastered the art of manipulation, how difficult could it be to tempt a killer into a trap? But who is the decoy . . . and who is the prey?

This book messed with my head, big time. See, I liked psychological thrillers. I like reading a book where I don’t know what is going to happen from one chapter to the next. I like damaged main characters. I didn’t think that I was going to get that with Believe Me. I thought this book was going to be your typical who done it with the female main solving the crime. What I got instead was a book that kept me guessing from chapter to chapter. A book that I had a hard time forgetting about once I was done with it. A book that got under my skin. I should have known better than to assume the book was going to be a typical book.

Believe Me’s plot started off simple and progressed into complex. Claire was a British ex-pat actress living in New York City without a green card. Desperate for work, she starts doing decoy work for divorce lawyers. It is that job that puts her in the path of Professor Patrick Folger. His wife is found dead the day after the setup. Claire is brought in for questioning since she was the last person to see her alive. She is recruited by a shady psychologist to get to know Patrick and to get a confession out of him. Little does Claire know that her life is going to be turned upside down and inside out.

Claire was such a complex character to write. As a reader, I love it when characters have different layers to them. Claire definitely had them. There was one point in the book where I was questioning her memories of growing up in foster care. She was such a great actress that she made me, the reader, question what I was reading. I am sure that was the author’s intention. I loved it!!

I didn’t know how I felt about Claire. My feelings for her went from one extreme to another. I could love her in one chapter and then hate her in another. I have never had another book do that for me. Even at the end of the book, when we were seeing the “real” Claire, I was still on edge about her. I mean, was that the real Claire we were seeing or was it another one of her personalities?

I’ve gotta say that Patrick had me fooled the entire book. I went from thinking one thing about him to thinking another to rethinking my opinion. So, needless to say, I was surprised by what he revealed to Claire. I shouldn’t have been but I was. Actually, let me rephrase that. I was more shocked by what he revealed.

I was also surprised that the poem referenced in the book “Les Fleurs du Mal” is an actual book written by Charles Baudelaire. To be honest, I did think that it was made up. Until I did a google search and there was a ton of information about it. I’m not going go too much into him but I will say that those poems are freaky. Google them and him. You’ll see what I mean. 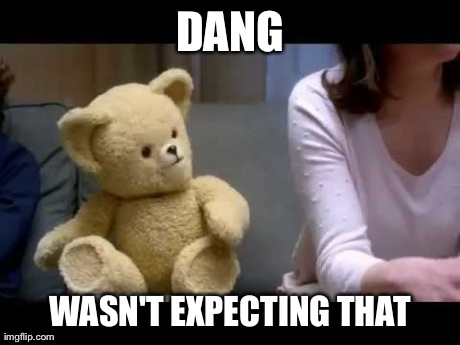 The end of the book was insane. It is where the plotline went from simple to complex. I am not going to get into much of the ending except I wasn’t expecting what happened to happen. Also, as I mentioned above, I wasn’t too sure about Claire. Even with everything revealed, I still had my doubts about her.

There were a few reasons why I didn’t give Believe Me a 5-star rating. The main reason was that the book got off to a slow start. I know that the author was laying the groundwork for Claire’s story but still. It crept. I almost DNF’d (but I am glad I didn’t).

I also felt that the plot faltered towards the middle of the book when Claire was in the mental hospital. I felt that her experiences in that hospital were not relevant to the storyline. It was interesting but not relevant.

My last reason was the last few chapters of the book and how Claire’s secret came out. While it was shocking, I definitely didn’t see it coming. It came out of left field. When the book finally ended, I felt it was anticlimactic.

What I liked about Believe Me:

A) Got under my skin

What I disliked about Believe Me:

A) Book got off to a slow start

B) Plot faltered towards the middle of the book

I would give Believe Me an Adult rating. There is sex. There is violence. There is language. I would suggest that no one under the age of 21 read this book.

There is a trigger warning for Believe Me. They are mental illness. If you are triggered by that, I suggest not to read the book.

I would reread Believe Me. I would recommend this book to family and friends. But I would include a warning about the triggers.

I would like to thank Random House Publishing Group, Ballantine Books, and NetGalley for allowing me to read and review Believe Me

All opinions stated in this review of Believe Me are mine

5 thoughts on “Believe Me by J.P. Delaney”