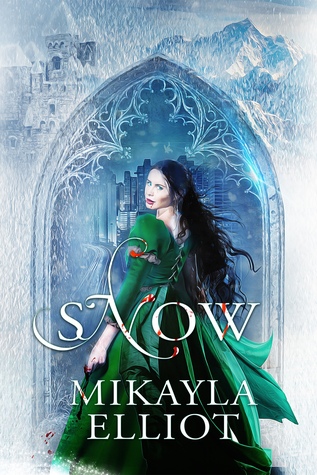 Where you can find Snow: Amazon | Barnes and Noble

Taken from all she has ever known and loved, Neva finds herself swept into a world of vampires where she learns she will determine their future. Yet she quickly discovers she is the target of a vampire, Zachariah, seeking to stop her from altering the vampire lineage. She must decide which path she will take while trying to protect the family she left behind and discovering a past she cannot escape.

When I started reading this book, I thought that it was going to be a vampire Snow White type of book. I don’t know why I thought that, but I did. If I paid more attention to the blurb, I would have seen that.  Oh well.

I don’t understand how Snow was labeled as a young adult novel. Neva, the main character, was married. If I were to guess at her age, I would put her in her early to mid-’20s. I thought that his book was better suited for the NA genre than YA. But that’s me. Someone else could have a different take on it. Which is a wonderful thing about writing reviews. No one’s opinions are wrong. Unless you didn’t read the book and give your opinion, then I don’t pay attention to those reviews.

I liked the plot of Snow. I thought that it was original. Neva is brought into the vampire world when her life was almost taken in an attack. She is thrust into the middle of a conspiracy that will leave everyone reeling. Can Neva bring Zachariah to his knees and save the vampire lineage? Or will she become a pawn in an ancient war?

I liked Neva but I found her whiny for most of the book. Yes, she had a terrible shock when she was turned. It would have been a huge shock for anyone. Even after Thedryk explained why she was turned and who she was, she still whined about it. She didn’t understand the danger she was in. For an adult, she didn’t act like one. I did like that she wised up during the last half of the book. Seeing what happened to her family shocked her into wising up.

I didn’t think that Zachariah wasn’t that bad of a guy for most of the book. Yes, he didn’t like Neva and yes, he was only with Eliza because he cared about the power. The author showed a 100% different side to him when he was interacting with his adopted daughter. He cared for them. I honestly don’t think that he is going to be as bad as he was made out to be. I do think it is awful what he did in the last half of the book. But it didn’t go with what the author showed. I wonder if there is more to his story and if it will be revealed in book 2.

I loved what the author did with the vampires in this book. While these vampires need human blood, they don’t need it that often. They can eat regular food but it doesn’t do anything for them. Not everyone can be turned into a vampire, though. The author explained that people can be turned into vampires have a special aura. The vampires can see it but can only turn if they have permission from the Council. If someone is turned who doesn’t have the special aura, they become something out of a nightmare. The author also had the vampires have a special gift. Some are stronger than others but everyone has it.

There is even a science fiction angle of Snow. There is a vampire that can open portals into different dimensions. It is explained more thoroughly in the book. I found it fascinating and wished that it has been added sooner in the book.

The end of Snow was action packed and moved very fast. What happened to Zachariah, he deserved it. But it was the end of the book that made me go what. First with the introduction of a famous fictional character. Then it was who was introduced in the very last pages of the book. It is that revelation that makes me excited to read the next book in the series.

What I liked about Snow:

A) How the vampires were portrayed

What I disliked about Snow:

A) Neva. She was a whine bag for most of the book

B) Zachariah. I was on the fence with him for most of the book. But the ending events turned me

C) What happened to Neva’s family

I would reread Snow. I would also recommend this book to family and friends.

I would like to thank Independent Book Publisher’s Association, Member’s Titles, and NetGalley for allowing me to read and review Snow.

All opinions stated in this review of Snow are mine.

One thought on “Snow (The Black Ice Trilogy: Book 1) by Mikayla Elliot”