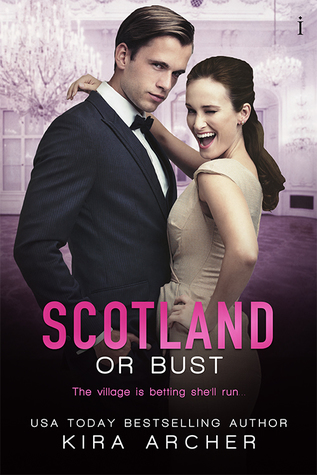 Where you can find Scotland or Bust: Amazon | Barnes and Noble

After dumping her boyfriend, Nicole Franklin impulsively jumps on a plane and heads to Europe. Sure, money and a job would have been nice to line up first. Even a visa, for that matter. So now she has to play tour guide at an Outlander experience for the most obnoxious man on the planet. Until she stumbles into the wrong bed in the middle of the night and wakes up in Harrison’s arms. Now his family thinks they’re engaged, and the entire village is betting on how long before she’ll be running for the hills.

Harrison Troy has a reputation in the town for burning through assistants. And the bubbly new one he’s just hired is likely no different. But his family quickly has them “engaged.” He should be upset, but she’s the perfect buffer for his interfering family. She says she doesn’t need another man in her life–even if he comes with a castle–and that’s fine with him. So why can’t he stop thinking about the woman who is charming everyone in the town, and maybe even him?

When I started reading Scotland or Bust, I was excited. I mean, hello Scotland. I have a slight obsession with Scotland. I **might** have watched Braveheart a gazillion times. And I might pick up any romance (well, any book) that has Scotland the background in the book. So, needless to say, when I saw that Scotland or Bust was set in Scotland, I jumped on it.

My excitement over reading the book faded as I read the first chapter. Harrison was a complete and utter idiot (the nicest word I could put down). Nicole came across as too trusting. I mean, who would say yes to an offer of employment from a complete stranger. And then drive away with him? Not me, that’s for sure. It is safe to say that by the middle of the book, I was ready to DNF it. It was too much. But the author did manage to pull me back in.

Nicole was way too trusting for me. Like I said above, who gets into a car with a stranger and agrees to be his temporary assistant. I did like that she took Harrison’s family’s eccentric in stride. I mean, her first sight of his grandmother was her naked on the castle ramparts. So, yeah. I also found fault with her uprooting herself to work in Europe. It isn’t that easy in real life.

I didn’t care for Harrison. There had to be a reason why he went through as many assistants as he did. They don’t up and quit on you for no reason. I also didn’t like his disdain for his family. They embarrassed him. Half the book was him making excuses to Nicole about why his family was the way they were. He blamed his grandmother being Scottish as the reason. Also, I thought that his dislike for the Outlander series a bit much. I mean, that series was his bread and butter. He shouldn’t have been that outspoken about his dislike. It made him seem like a jerk for 90% of the book.

I actually liked Harrison’s family. They were one of the more real families that I have read in a book in a while. I laughed when reading his scenes with his grandmother in it. She was a free spirit. I did find it weird that she ran around naked but other than that, she was great. I almost broke a rib laughing when she gave Harrison her engagement ring to give to Nicole. Which she kept under her boob. I understood Harrison’s reluctance to give Nicole a boob sweat covered ring.

The villagers were an eccentric lot. I did get a giggle out of the bet that was being placed on how long Nicole was going to stay with Harrison. I also laughed when they turned the bet into how long the engagement would last. Resourceful people…lol.

There was chemistry between Nicole and Harrison. From the kiss that they had on the airplane (granted it was to “help” Harrison with his fear of flying) to the end of the book, it was there. The sparks that those two threw were off the wall. Which lead to some pretty hot sex. Those sex scenes were insanely hot.

The end of the book had your typical HEA. The author did a great job of wrapping all the storylines up. I was happy with how it ended.

What I Liked About Scotland or Bust:

A) That it was sent in Scotland

What I disliked Scotland or Bust:

A) Harrison’s disdain for his family

B) Nicole being too trusting

C) Harrison’s disdain for The Outlander

I would give Scotland or Bust an Adult rating. There is explicit sex. There is language. There is mild violence. I would recommend that no one under the age of 21 read this book.

There are no trigger warnings for Scotland or Bust.

I would reread Scotland or Bust. I would also recommend this book to family and friends.

I would like to thank Entangled Publishing, Entangled: Indulgence, and NetGalley for allowing me to read and review Scotland or Bust.

All opinions stated in Scotland or Bust are mine.

4 thoughts on “Scotland or Bust by Kira Archer”