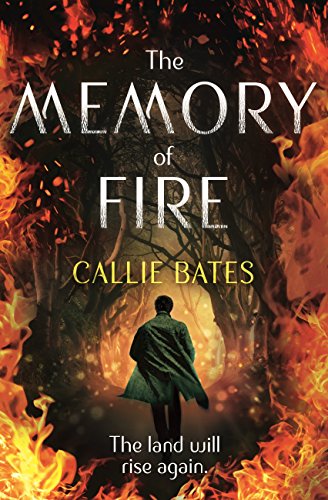 The Memory of Fire – Book 2

Where you can find The Memory of Fire: Amazon | Barnes and Noble

With The Memory of Fire, Bates expertly deepens her tale, spinning glittering threads of magic and intrigue into a vibrant tapestry of adventure, betrayal, and romance.

Thanks to the magic of Elanna Valtai and the Paladisan noble Jahan Korakides, the lands once controlled by the empire of Paladis have won their independence. But as Elanna exhausts her powers restoring the ravaged land, news that the emperor is readying an invasion spurs Jahan on a desperate mission to establish peace.

Going back to Paladis proves to be anything but peaceful. As magic is a crime in the empire, punishable by death, Jahan must hide his abilities. Nonetheless, the grand inquisitor’s hunters suspect him of sorcery and mysterious, urgent messages from the witch who secretly trained Jahan only increase his danger of being exposed. Worst of all, the crown prince has turned his back on Jahan, robbing him of the royal protection he once enjoyed.

As word of Jahan’s return spreads, long-sheathed knives, sharp and deadly, are drawn again. And when Elanna, stripped of her magic, is brought to the capital in chains, Jahan must face down the traumas of his past to defeat the shadowy enemies threatening his true love’s life, and the future of the revolution itself.

I hate it when I can’t think of how to start a review. I hate it, even more, when the review is on a book that I loved. If it was a book that I was “meh” on, then I wouldn’t be OK with it. But I loved The Memory of Fire. This book was as good as The Waking Land. From a fantastic plotline to characters that were relatable, I was taken away by this book.

In my experience, I have found that books that were 2nd in a series or trilogy usually drag. I have discussed this in earlier posts, but sometimes the author has used up all their creative juices in book 1 and book 2 gets the shaft. Not in The Memory of Fire.  This book kept up the energy from The Waking Land. For an author to be able to carry that tension over from the first book astounded me. I loved it!!

The backdrop of the story, the country of Paladis, was perfect for what was going on in the book. This was a country that hated anything to do with magic. With the help of witch hunters and their bells, sorcerers and witches were hunted, captured and put to work in a prison made for them. Over the centuries, the emperors have used the witch hunters as a way to control the population and keep them compliant. But, things come to a head when Jahan is summoned to the palace. A revolution is about to erupt with magic at the center of it.

At the center of everything is Jahan. I loved him in The Waking Land. I was expecting to be let down when I realized that this book was his story. Oh boy, was I not!! Jahan was a damaged man. He is missing memories, thanks to the witch Madiya and her experiments on him. His mother was a shell of herself after witch hunter’s attacked his house. He, himself, was addicted to opium. Madiya would douse him with it to do her experiments. I wasn’t surprised by the terror that he felt when in Paladis, knowing that she was around.

He remained tortured about Madiya for 75% of the book. She was his Boogeyman. I was surprised when she made an appearance in the last half of the book. I was also surprised by the conflicting signals that she sent out. In the end, though, she did get what she deserved. Which made me happy.

There is so much that happened in this book that if I wrote out about it, my review would go on forever. I will say that I was happy when Elanna arrived. Not happy about how she arrived or how she was treated. I also wasn’t happy about certain things that happened that almost broke Jahan but I am happy when things were cleared.

The relationship between Jahan and Elanna was one of the best fantasy relationships that I have ever read. Again, not getting into it but I will say is what they have is true love. She is willing to accept him for who he is and vice versa.

I won’t go into much about the latter half of the book except to say “HOLY PLOT TWIST!!!!” I was not expecting what happened to happen. It threw me for a loop and kind of messed with my head. But, considering the duress that this person was under, I don’t blame them for doing what they did.

What I liked about The Memory of Fire:

B) Madiya getting what she deserved

What I disliked about The Memory of Fire:

A) How Elanna was brought to Paladis

I would give The Memory of Fire a rating of Older Teen. There is sex, which is vague but you know what is going on. There is violence. There is no language. I would recommend that no one under the age of 16 read this book.

There are triggers in The Memory of Fire. They are child abuse.

I would reread The Memory of Fire. I would also recommend this book to family and friends.

I would like to thank Del Ray, Random House Publishing Group – Ballantine, and NetGalley for allowing me to read and review The Memory of Fire

2 thoughts on “The Memory of Fire (The Waking Land: Book 2) by Callie Bates”