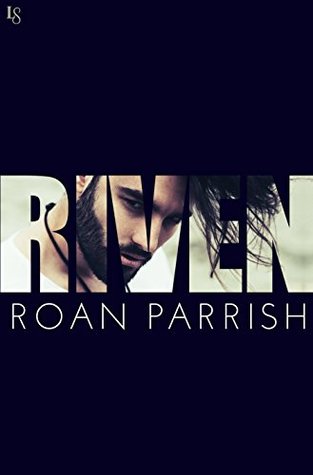 Trigger Warnings: Talk of past drug use, talk about past alcohol use, talk of emotional neglect of a child

Where you can find Riven: Amazon | Barnes and Noble

Theo Decker might be the lead singer of Riven, but he hates being a rock star. The paparazzi, the endless tours, being recognized everywhere he goes—it all makes him squirm. The only thing he doesn’t hate is the music. Feeling an audience’s energy as they lose themselves in Riven’s music is a rush unlike anything else . . . until he meets Caleb Blake Whitman. Caleb is rough and damaged, yet his fingers on his guitar are pure poetry. And his hands on Theo? They’re all he can think about. But Caleb’s no groupie—and one night with him won’t be enough.

Just when Caleb is accepting his new life as a loner, Theo Decker slinks into it and turns his world upside-down. Theo’s sexy and brilliant and addictively vulnerable, and all Caleb wants is another hit. And another. That’s how he knows Theo’s trouble. Caleb can’t even handle performing these days. How the hell is he going to survive an affair with a tabloid superstar? But after Caleb sees the man behind the rock star, he begins to wonder if Theo might be his chance at a future he thought he’d lost forever.

I haven’t read a lot of romance with rock stars in them. For some reason, I never read one when they were the big thing. So, I saw Riven up for review on Loveswept’s NetGalley page, I decided to request it. Plus, I love romances were both parties are damaged. It makes the romance more realistic and the big “I Love You” scene so much sweeter to read. Another reason I requested the book was because of the cover. I loved it. Simple with only the headshot of the model.

The romance aspect of Riven was intense. I got goosebumps because their attraction carried off my Kindle. Of course, Caleb tries to go and ruin it all. But I could understand why he fought it so hard. Every single relationship he ever had been ruined by his actions. He felt that it would be better keeping people at arm’s length. Then he met Theo. On Theo’s end, he craved affection. He did come across as a little too needy during parts of the book. His neediness both made me like and dislike him. He was shattered every time he and Caleb fought. It got old after a while.

The sex scenes were amazing. They were so hot and dirty. Man were they dirty. I did think that the sex scene also got repetitive after a while, though. I understand tops and bottoms (look it up if you don’t know) but I wanted to see Theo on top at least once. There was also one sex scene that made me want to throw up in my mouth. I won’t get into it but I will say that I hope Theo wiped well because Caleb did what he did. Other than those two complaints, I loved the sex scenes!!

I couldn’t understand why Theo never finished a sentence. A good part of his sentences ended in “…..“. Which drove me bat-poop crazy. I hate it what the character always trails off. I get why the author had Theo do it but still.

Speaking of Theo, I liked how his character was written. He was damaged but not as bad as Caleb was. His damage came from his parents being distant and cold to him. That affected him in everything that he did. He chased men for the warmth he got during his sexual encounters. So I understood when he clung to Caleb and why he was so upset when they fought. I do think that what happened with the band should have happened earlier. Theo would have been way happier.

I loved Caleb. The author did a great job of capturing the rocky slope that he dealt with to keep his sobriety. He spoke candidly of relapsing to Theo and made no promises that he wouldn’t do it in the future. I also liked the fear he had about his music and not being able to play. A very real fear considering what went with the lifestyle before. I do think that he could have been a bit nicer to Theo about certain things. But he wasn’t. Even that turned out in his favor.

What I liked about Riven:

A) Theo and Caleb’s romance

B) The hot sex scenes

What I disliked about Riven:

A) Theo coming across as too needy

B) Theo not finishing sentences

I would give Riven a rating of Adult. There is explicit sex. There is language. There is mild violence. I would recommend that no one under the age of 21 read Riven.

There are trigger warnings in Riven. They are talk of past drug use, talk about past alcohol use, talk of emotional neglect of a child. If you are triggered by any of these, I would suggest not reading this book.

I would like to thank Loveswept, Random House Publishing Group – Loveswept, and NetGalley for allowing me to read and review Riven.

All opinion stated in this review of Riven are mine.

4 thoughts on “Riven by Roan Parrish”