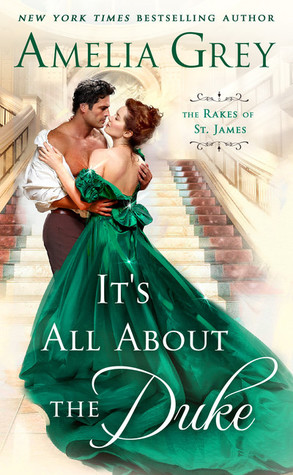 Series: The Rakes of St. James

Last Night with the Duke – Book 1

Where you can find It’s All About the Duke: Amazon | Barnes and Noble

Nearing thirty, the Duke of Rathburne is finally ready to make amends for the wager that caused him and his best friends such scandal―but taking on a ward who needs a husband is a feat he’s not sure he can manage. The last he saw of Miss Marlena Fast, she was a spirited little ruffian, not the sort of bride most bachelors on the marriage mart sought. But one glance at the lovely lady she has become is enough to convince him otherwise…

Orphaned young and shuffled from family to family, Marlena counts on her fierce independence and quick wits to keep herself content. Being the responsibility of a notoriously wicked Duke who upended so many lives is an unexpected challenge when she realizes he arouses her decidedly feminine desires. Marlena must be careful. She has her own scandalous secret to protect. If he finds out, will it shatter her chances of a happily-ever-after with the notorious rake?

If you have followed this blog then you know my feelings on picking up books midway or at the end of a series. I do not like it. But I still end up reading/reviewing them. Go figure. Anyways, when I was approached to review It’s All About the Duke, I didn’t know it was the last book in the series until I had already said yes and downloaded it.

This book is a combination of needing to read the other books in the series and stand-alone novel. The author did a great job of introducing the Duke of Rathburne’s backstory. The author adequately proved his and the other Dukes’ guilt over what they did. They made sure that those girls involved were alright. They didn’t apologize to them, though. But considering that this book does take place in Regency England and Dukes were one step below princes, I wasn’t surprised. They did not need to apologize to anyone.

I didn’t like Marlena. She is the main reason I rated the book the reason I did. Why didn’t I like Marlena? Well, she started a scandal sheet that was mainly to drag up old scandals. She had it out for the Dukes’ involved in the secret admirer scandal. She didn’t care who she hurt when she was writing those articles. In her mind, she was vindicating her friend’s older sister….who was one of the girl’s involved in the scandal. Her self-righteousness made me eye roll hardcore.  Then she met the Duke of Rathburne and it became all about keeping what she did a secret from him. Especially since he has “set his sights” on her.

I didn’t get how the Duke of Rathburne didn’t know that Marlena was the one writing the scandal sheet until later in the book. It puzzled me. There she was, bleeding out clues, and he was so enamored of her that he didn’t see it. I also didn’t understand how he didn’t know that Marlena’s best friend sister (mouthful!!) was one of the girl’s he “pranked” until later on in the book. That too puzzled me because he had said that he was keeping track of them. How didn’t he know that vital piece of information??

There is Instalove in It’s All About the Duke but, surprisingly, it was on the Duke of Rathburne’s side. He was seeing hearts when he sees her. Marlena, however, was attracted to him but didn’t have romantic feelings until later in the book.

Justine, Marlena’s cousin, was a hoot. From the minute she realized that Marlena was the Duke of Rathburne’s ward, she went out of her way to try to get into his bed. I was dying laughing at her pushing her chest out. The whole scene where she tried to put herself in Rath’s bedroom had me laughing so hard that I was crying.

The end of It’s All About the Duke was sweet. All the storylines were wrapped up. Each character mentioned got their version of a HEA. I am wondering if the author will make a series with the women. There are several girls that I would like to see have their own story.

What I liked about It’s All About the Duke:

B) Marlena not having strong feelings for Rath right away

C) Justine. I loved her scenes

What I disliked about It’s All About the Duke:

A) Marlena. I couldn’t stand her

C) Instalove (even if it was on Rath’s side)

I would give It’s All About the Duke an Adult rating. There is explicit sex. There is mild violence. There is not language. I would recommend that no one under the age of 21 read this book.

There are no trigger warnings in It’s All About the Duke.

I would recommend It’s All About the Duke to family and friends. This is a book that I would reread. I would also read the other books in the series.

I would like to thank St. Martin’s Paperbacks, St. Martin’s Press and NetGalley for allowing me to read and review It’s All About the Duke.

All opinions stated in this review of It’s All About the Duke are mine.

One thought on “It’s All About the Duke (The Rakes of St. James: Book 3) by Amelia Gray”