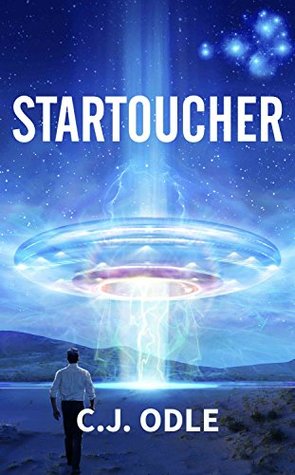 Where you can find StarToucher: Amazon

Will humanity survive being judged in a galactic court?
New Age Sci-Fi, a mystical and spiritual novel.

After 3.8 billion years, the alien creators of life on Earth return to evaluate the results of their experiment. One species is found to be an extreme danger to itself and others – Humanity. Evidence for the continuation of the species hangs by a thread.

Jake Connolly, talented up and coming LA lawyer, has a hidden psychic side long suppressed. When a series of intense visionary experiences threaten to derail his life, he is dragged unwillingly towards mysterious events deep in the Mojave Desert. What he discovers there changes him forever and will affect the lives of everyone on the planet.

As the world watches its destiny unfold, humanity is forced to fight for its survival in a galactic court and justify its existence to far superior beings.

I like science fiction. Something about aliens, space crafts, and the human race fascinates me. I would like to think that if aliens decided to come to Earth, there would be no mass riots or calls to shoot them down. But I am a realist. I know that people, as a whole, do not deal with things like that rationally. There would be mass riots. The leaders of all the countries would try to blow it out of the sky. When I got the request to review StarToucher, I did think that it would be one of those types of books. Even after I read the blurb. But, I was surprised. StarToucher is nothing that I thought it would be.

StarToucher’s storyline was original and a fresh look at how humanity began. I liked the fact that humanity began as an experiment and was monitored by aliens for centuries. I liked that the aliens found that humanity was an extreme danger to themselves and others in the galaxy. So the creators (I likened them to scientists) have a trial to see if humanity should be erased or allowed to continue.

The author did a great job of showcasing everything that is going on in the modern-day. He showed that humanity was doing so much harm to the Earth that its creators had to jump in to stop it. I loved it!!

The main character of StarToucher is a lawyer, Jake Connolly. I didn’t like him at first. He came across as cocky and way too sure of himself. As all lawyers do. When his visions started bothering him to the point he took a forced vacation, I started to see a different Jake. By the time he met Sarah and Genesis, he was almost there with the character transformation. By the time he was on the ship, he was transformed. I loved it. I love seeing a character change, for the better, in a book.

I thought that the author chose an eclectic group of people to represent the Earth. The President of the United States, the President of China, The Pope, a physicist, a philosopher, a shaman, a teenaged activist, and a mother. A broad spectrum and each lived up to their stereotypes. I had to laugh because the President kept getting choked by the alien truth device. Typical politicians. Too bad there wasn’t one in real life…lol.

I am going to admit that I was surprised by the verdict and by what the aliens were going to do. I thought it was going to go the other way. I was also shocked by Jake, Sarah, and Genesis’s roles in that decision.

There is a twist in the plot towards the end. With what happened and what was revealed, I am hoping that there will be a book 2!!!

What I liked about StarToucher:

B) a great job of showcasing present-day issues

C) The eclectic group of people chosen to represent Earth

What I disliked about StarToucher:

A) POTUS. He couldn’t stop lying to aliens

B) Genesis. They blew the lid off of what was happening

C) Jake’s visions. My head hurt reading about them

I would give StarToucher an Older Teen rating. There are sexual situations but they are very vague. There is violence. There is language. I would recommend that no one under the age of 16 read this book.

There are no trigger warnings for StarToucher.

I would recommend StarToucher to family and friends. This is a book that I would reread.

I would like to thank the publisher for allowing me to read and review StarToucher.

All opinions stated in this review of StarToucher are mine.

One thought on “StarToucher by C.J Odle”