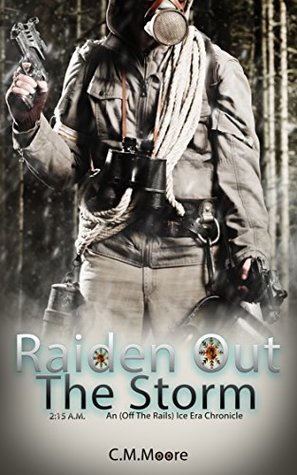 Raiden Out the Storm – Book 3

Where you can find Raiden Out the Storm: Amazon | Barnes and Noble

In the kind of rough and tumble life they lead, Raiden knows there is no place for love…

Raiden refuses his connection to Ash Winsor. She’s mean. She insults him. And she carries a big gun. He won’t have her. He should get away from her, but how? As soon as they can find the man who tied their heartstrings together, they’ll go their separate ways. All they have to do is get to H.S.P.C. headquarters building and pay him off. Raiden hopes that once he’s free, he’ll be able to go back to trekking on the surface of the planet and sending money home to his dad. He should be able to forget all about Ash and her handsome shadow.

Love has kept Stone as Ash Winsor’s shadow for two years. He can’t bring himself to leave her even though the relationship is painful and going in circles. When he finds out that Ash is now tied to another man, Stone wants nothing more than to see Raiden gone. Together they will both follow King Winsor from train to train. Stone is hoping against hope that the rough and troubled harvester will one day choose him, and Raiden will no longer be at their side.

Lying has become as natural to Ashley Winsor as breathing. Ash had made sure Stone thinks she’s a man. She has also made sure Raiden doesn’t know how much she needs him. If Ash can just make the trek to the headquarters building, she will be free of the two men who want her more than anything. The only problem is, the closer she gets to her goal, the more she wonders if she wants them gone.

When Troll River Publishing approached me to review Raiden Out The Storm, I almost said no. At the time, I was 10 books behind for writing reviews and I was beginning to feel burnt out by writing reviews. I decided to accept the request when I saw the cover. For some odd reason, I liked it. It called to me. Fortunately for me, a small mini-vacation happened where I caught up on my reviews. I also restructured my review schedule so I wouldn’t fall behind.

What I didn’t know when I accepted was that Raiden Out The Storm was book 3 in a series. Each book is the same storyline but told from different perspectives. So, you can’t pick this book up and start reading it. You need to read the first two books to find out exactly what is going on. I was a bit lost reading. There were references to the other characters and situations that I didn’t get. It did take away from me enjoying the book.

Ash interested me. She was tough on the outside but sweet on the inside. When it was revealed why she had to become so tough, my heart broke. It was that incident that shaped her into becoming the unofficial leader of the harvesters. I thought her masquerading as a man interesting. She knew that she wouldn’t get the respect from the men she “ruled” over so she became a man. A man would be respected. A man would be feared.

Stone annoyed me. Mainly because he lived with Ash and didn’t pick up on the clues that she was a woman. She didn’t grow facial hair and her voice didn’t change. He was in love with Ash. But he was in love with King Windsor, the man. Not Ash the woman. I kind of wanted to smack him upside the head for not paying attention enough. Also, I didn’t like how he treated Raiden at first. Raiden was bound to Ash, against his will. He had no control over what was going to happen. Which made me aggravated because Stone acted like a jealous twit for most of the book.

I thought Raiden was a pushover. He did show some spirit at the beginning of the book but it kind of fizzled. When his ex-person (I don’t know how to classify that person) started bullying him, he stood there and took it. He didn’t attempt to fight that person even when they dropped him out in the woods, naked. He didn’t defend himself against Stone either. He acted like a doormat. Then, at the end of the book, he did a 180. I sat there and thought to myself “Where the hell did this come from“.

With all the faults of the book (because I didn’t read the first two), I would have been fine with Raiden Out The Storm. I liked the plotline and, for the most part, the characters. But, then I read the rape scene. Since I read books that are a little more gritty, I wasn’t that shocked about it. It was the after the rape that left a bad taste in my mouth. While the rapist expressed remorse, the victim kept saying it wasn’t rape, I wanted it. I got mad when I read that. That person said no quite a few times and the rapist ignored him. I agreed with Ash’s reaction when she found out. But then, everything was alright between the rapist and the victim. Even more sexual encounters. I couldn’t wrap my head around it. It was like it never happened. It is that reason why I rated the book the way I did. Other than that, like I said above, I liked it.

The end of Raiden Out The Storm was different. The author did a great job of resolving the important storylines but he left the smaller ones open. The epilogue was good but I did wonder how Ash was going to do it and keep up her façade as a man.

What I liked about Raiden Out The Storm:

What I disliked about Raiden Out The Storm:

A) Not a standalone book. You need to read the other books before you read this one

B) Ash’s men. They annoyed me. She had more balls than they did.

C) The rape storyline. I don’t think that it needed to be in the book. It added nothing to it.

Do you like to read books that have graphic scenes in them? Why or why not?

I would like to thank Troll River Publication for allowing me to read and review Raiden Out The Storm.

All opinions stated in this review of Troll River Publication are mine.