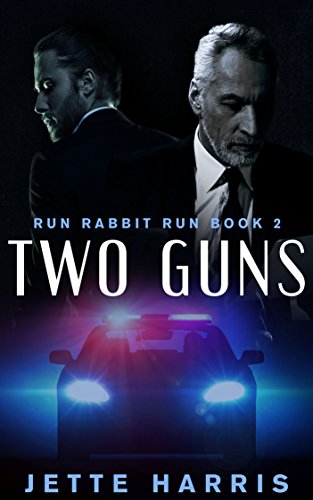 Where you can find Two Guns: Amazon

Days before their graduation, four students in a sleepy Atlanta suburb go missing, leaving behind nothing but two abandoned vehicles, an eerie 9-1-1 call, and an alarming amount of blood. Just like some disappearances from four years ago. And six years before that. And three years before that.

Agent Richard Steyer of the FBI’s Violent Crimes division has retirement in his sights when he and his partner are called to Atlanta. His final case? Connect this recent mystery to the only case Steyer couldn’t solve: a serial killer known as the Phoenix.

Meanwhile, Avery Rhodes—occasionally known as the Phoenix—is enjoying his visit to Atlanta…and his new playthings. When he hears his old adversaries are on the case, he decides to expand his sadistic playground to include them, the local law enforcement, and the victims’ families.

As the Phoenix’s spree hurtles toward its deadly conclusion, it becomes a question of who will make it out of his game alive.

A crime thriller as relentless as Karin Slaughter’s Triptych, featuring a show-stealing antagonist as memorable as Hannibal Lecter.

If you have followed my reviews or blog, then you know my feelings about 2nd books in a series. Especially when the first book blew me away. I tend to get disappointed and let down by book 2’s. Lately, though, I have read a lot of 2nd books that were as good or better than the first book. Two Guns is such a book. It was as good as the first book.

What I liked, and enjoyed, is that I got to see the police and FBI investigation of the kids’ disappearance. The author didn’t draw out the connection to Phoenix. Instead, she had the FBI agents make the connection pretty early. It was the investigation and the frantic search for kids’ that drew me in and kept my attention. The author did a great job of showing how the local police hated working with the FBI (or Feds as they are called). She showed how emotionally invested that the agents get into their cases. Mainly Steyer. Steyer had a history with Phoenix going back to the first killings in Detroit. Remington also did and his was more emotionally charged (if that makes sense).

What I also liked about the book was that Avery was so complicated. From Colossus, I knew he was depraved and sadistic. While he still was, there was a new depth to him. He loved, well-loved as much as a psychopath could. He also felt a sense of kinship with Agent Steyer and Agent Remington. What scared me was that he talked to Monica’s younger sister and brothers. That talk, along with the flashback to the Detroit killings, chilled me to the bone.

I was a little perturbed that no one seemed to know that Avery was masquerading as a cop until almost the end of the book. It made me scratch my head because they were on top of everything except that. I thought that Steyer and Remington would have been more aware of who was on the local force. Seeing that Phoenix has it out for Remington. Steyer is on his list too but he wants Remington in the worse way.

It took me a while to realize who Thatch was. A long while because I couldn’t imagine Thatch as that person. I couldn’t wrap my head around it.

The end of Two Guns was fantastic. While some storylines were answered, others were not. I still have questions that I hope are answered in book 3.

What I liked about Two Guns:

B) A realistic look at police/FBI investigations

What I disliked about Two Guns:

A) Thatch. Not that I disliked him. I pitied him more than anything

B) Avery masquerading as a cop and no one knows

There are trigger warnings. They are rape, assault, kidnapping, and stalking. If you are triggered by any of these, I would suggest not read the book.

I would recommend Two Guns to family and friends. I would include a warning about the explicit sex and violence and the triggers. This is a book that I would reread.

I would like to thank Jette Harris for allowing me to read and review Two Guns.

All opinions stated in this review of Two Guns are mine.