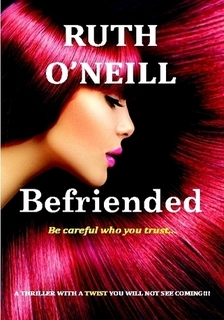 Where you can find Befriended: Amazon | Barnes and Noble

Some secrets never leave us alone. . . Gemma Peacock’s life was perfect – or at least, she thought it was. She had a home she loved, a job she enjoyed, and a husband she adored. The only cloud on the horizon was the continuing tension between Gemma and her mother-in-law, but that’s the same for everyone, right? After the death of her beloved husband, Ritchie, everything begins to fall apart. Indiana Manors’ life, on the other hand, is far from perfect – but she knows just what she has to do to fix it. Befriend Gemma Peacock – and destroy her.

I wasn’t expecting to like Befriended as much as I did. When I read the blurb, I thought that it was going to be a chick lit novel. There were parts of the book that do have that vibe. But, this book was so much more. It was the so much more that surprised me. The more I read, the more I liked and the more I enjoyed the story.

I did feel bad for Gemma for about 90% of the book. Her husband’s death devastated her. But, it was the secrets that were revealed after his death that rocked her world. Which brought me to my first question. Why did she keep going back to Indiana? I know that Gemma wanted to help her but still. I agreed with Maria. Gemma should have told Indiana to leave her alone after what happened in Crete. I do think that Gemma needed to come to terms with what Ritchie did and Indiana was there to help.

There was a point in the book where I did think that Indiana and Gemma’s relationship was going to become a Single White Female type of relationship. I mean, Indiana was calling Gemma’s friends and driving them away. She even phoned Mick and told him that Gemma wanted nothing to do with him. Thankfully, Mick didn’t believe that BS.

My feelings for Indiana was all over the board in the book. I first felt disgust for her when she revealed why she became Gemma’s friend. That changed to feeling bad for her because of her mental illness. I will say this, she did try to get help. My feelings then morphed into pity when it was revealed why she had singled out Gemma and what was being kept from her. Then I actually started to like her at the end of the book. Like I said, they were all over the place.

I did not see the big twist that came towards the middlish (more towards the end) of the book. I also did not see who was behind everything. That came as a huge surprise. Put it this way, when it was revealed why and who set everything in motion, my mouth fell open and I whispered (I was in bed), “No freaking way“.

I did think that Mick’s romance with Gemma was cute. But it did seem to me that it was more of an afterthought. I didn’t see that Gemma had feelings for Mick until he came to London. I thought they were friends. Then, suddenly, she has feelings for him. It seemed like it came out of nowhere. Of course, I could have missed the cues to their romance with everything else that was going on in the book.

The end of the book was great. I loved that everything was ended the way it did. Each character got their version of a happy ending.

What I liked about Befriended:

What I disliked about Befriended:

B) Indiana’s antics in the first half of the book

I would give Befriended an Adult rating. While there is sex, it is not graphic. There is language. There is also mild violence. I suggest that no-one under the age of 21 read this book.

There are trigger warnings in Befriended. They are mental illness, the death of a spouse and kidnapping. If you are triggered by any of these, I would suggest not reading the book.

I would recommend Befriended to family and friends. I would let them know about the triggers. This is a book that I would reread.

I would like to thank Ruth O’Neill and Lulu.com for allowing me to read and review Befriended.

All opinions stated in this review of Befriended are mine.