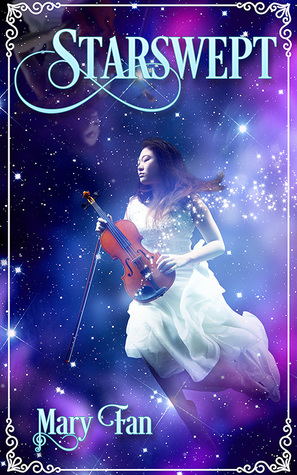 Where you can find Starswept: Amazon | Barnes and Noble

Some melodies reach across the stars.

In 2157, the Adryil—an advanced race of telepathic humanoids—contacted Earth. A century later, 15-year-old violist Iris Lei considers herself lucky to attend Papilio, a prestigious performing arts school powered by their technology. Born penniless, Iris’s one shot at a better life is to attract an Adryil patron. But only the best get hired, and competition is fierce.

A sudden encounter with an Adryil boy upends her world. Iris longs to learn about him and his faraway realm, but after the authorities arrest him for trespassing, the only evidence she has of his existence is the mysterious alien device he slipped to her.

When she starts hearing his voice in her head, she wonders if her world of backstabbing artists and pressure for perfection is driving her insane. Then, she discovers that her visions of him are real—by way of telepathy—and soon finds herself lost in the kind of impossible love she depicts in her music.

But even as their bond deepens, Iris realizes that he’s hiding something from her—and it’s dangerous. Her quest for answers leads her past her sheltered world to a strange planet lightyears away, where she uncovers secrets about Earth’s alien allies that shatter everything she knows.

When I was approached to review Starswept, I was kind of “eh” about it. But a friend and fellow blogger, Kristin at Simply Enchanted Life, had reviewed it and she loved it. I trust her opinion when it comes to books, so I made the decision to review it. I am glad that I did because this book was fantastic.

Starswept takes place in the 2157 North Carolina. It did take me a while to realize that the book was set in North Carolina. I was so engrossed with Iris and Damiul’s romance that it didn’t register. It was only when the author makes a point of mentioning Charlotte, that my radar went off.

Iris was a gifted violist who, at the beginning of the book, more than anything wants her ranking to go up. She wants to attract an Adryil patron and be able to find her parents. She meets Damiul as he was running from security bots. He gives her a strange device and tells her not to tell anyone about it. It is soon after that she is able to see and hear him through telepathy. She is soon falling in love with Damiul even though he is hiding something from her. At the same time, she attracts an Adryil patron and is soon off to their planet. But, she comes to realize that what she knew about the Adryil race is not what she thought. There are truths revealed that will shatter her. Can she pull herself together to help the one person who needs it?

I liked Iris and I enjoyed watching her character growth throughout the book. She went from being a music-obsessed teenager desperate to attract a patron to a mature young woman who was able to roll with the punches. Her personality came off the pages. I also liked that she was a typical teenager. Well, as typical as a teenager could be while trying to outperform her peers. I couldn’t believe the pressure that she was put under to find a patron. Insane, knowing what I know now.

I am glad that Damiul was only shown through telepathy. At first, I wasn’t. I like my romantic characters to be together and interact like couples do. Having Damiul so far away and only so Iris could see him was excellent. What also added to his allure is that I didn’t know anything about him. He didn’t talk to Iris about his family. When things were revealed about him to Iris, I was right there with her being stunned.

Music is a huge part of this book. Everything revolved around it. From the school that Iris lived and trained at to going to Adryil. I am not an expert on musical instruments or even the type of music that a viola plays. But, I did my research while reading. If you want to hear a fantastic violist, google Nobuko Imai and watch a few videos of her playing. Beautiful!!!

The romance between Damiul and Iris was a slow burn. It was also different because he was only available to her through telepathy. I got caught up in their romance.

The end of Starswept was not what I expected. I will leave it at that. If you want to know more, read the book.

What I liked about Starswept:

What I disliked about Starswept:

B) The insane pressure that Iris was under

C) Damiul only being available to Iris through telepathy

I would give Starswept a rating of Older Teen. There is no sex or sexual situations in this book. There is a couple of kisses but that’s it. There is some mild violence sprinkled throughout the book. There is also mild language.

There are trigger warnings in the book. Because these would be considered spoilers, I will white them out. Highlight if you want to read them. They are slavery.

I would recommend Starswept to family and friends. I would give them a heads up about the trigger warning. This is a book that I would reread.

I would like to thank Snowy Wings Publishing for allowing me to read and review Starswept.

All opinions stated in this review of Starswept are mine.

One thought on “Starswept (Starswept: Book 1) by Mary Fan”