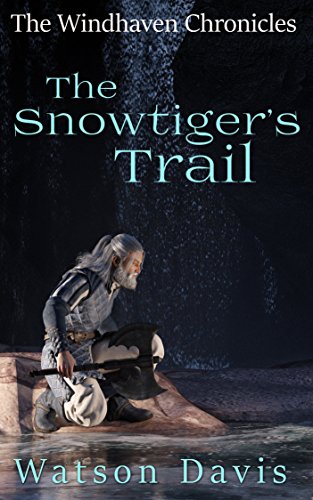 Where you can find The Snowtiger’s Trail: Amazon

Welcome to Windhaven and the Wrath of the Wizard-King!

A deposed Wizard-king leads his ragged band of followers to the last town before the Far Waste and hides there from his vengeful queen while building an army to re-take his rightful kingdom. A regular army won’t do for the Wizard-king. He needs something deadlier, something magical, something demonic.

This is a swords and sorcery tale of dark, soul-twisting magic where no-one is safe.

I have become a huge fan of Watson Davis. I have enjoyed reviewing his The Windhaven Chronicles. So when he asked me to read and review The Snowtiger’s Trail, I jumped on it. This book exceeded my expectations!! It also answered some questions that I had about the other books in the series.

The Snowtiger’s Trail follows Wallak of the Bright Fox clan as he tries to save his nephew from an evil king. This evil king is using dark magic to transform the people of the village that he took over. Wallak is captured while looking for his missing nephew. He is then transformed and used to fight the other villagers who were also transformed. Wallak needs to find a way to defeat the evil king. That way everyone who was transformed by the evil king can be free. But will Wallak be able to do it? Or will he be doomed to be enslaved to a monster for the rest of his life?

I liked Wallak’s character. He was such a wise guy. He was also a tough bugger too. I mean, he got beat on during the book. There were chapters where I wondered to myself “How on Earth is he still alive“. He was a dedicated uncle, brother, lover, and tribesman. I will say that I was not expecting what happened to him to happen.

I thought that the fantasy aspect of the book was wonderfully written. The author did a great job of gradually introducing King Thrune’s magic. He didn’t get into the transformation. That was left up to my imagination and I loved it. All I knew is what Wallak and Brida felt after each transformation.

The monsters that made up a good part of this story were creepy. There were minotaurs, centaurs, and Valryke type monsters, to name a few. The author also made up a few. The crab creatures and the flying snow tigers are ones that stood out in my mind the most.

I will admit, I was surprised at who those tribes ended up being. Thinking about it, after reading the book, it does make sense. I couldn’t wrap my head around it at the time.

There is a fair amount of violence in The Snowtiger’s Trail. Saying that I wasn’t turned off by the violence. The violence was needed to make the reader understand what Wallak, Brida, and the other changed people were going through. What I also liked is that no character was spared when it came to being killed off. It was another way of keeping me glued to the book.

What I liked about The Snowtiger’s Trail:

C) the fantasy aspect of the book was very well written.

What I disliked about The Snowtiger’s Trail:

B) The children being abducted and changed

I would give The Snowtiger’s Trail a rating of Adult. There is explicit violence. No language. There are sexual situations but they were not graphic.

I would give The Snowtiger’s Trail trigger warnings. They would be attempted rape, abduction of children. If you are triggered by those, I would suggest not reading the book.

I would recommend The Snowtiger’s Trail to family and friends. I would include a warning about the explicit violence and the trigger warnings. This is a book and series that I would reread.

I would like to thank Watson Davis for allowing me to read and review The Snowtiger’s Trail.

All opinions stated in this review of The Snowtiger’s Trail are mine.

One thought on “The Snowtiger’s Tale by Watson Davis”