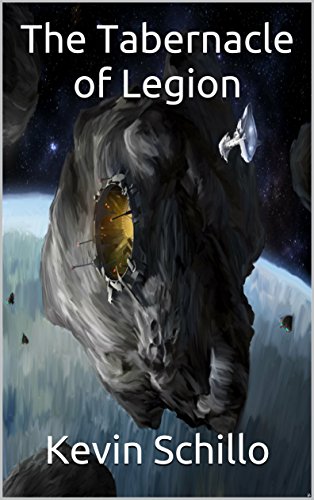 3.5 Stars (4 stars for Goodreads and Amazon)

Where you can find The Tabernacle of Legion: Amazon

In the midst of a golden era of space travel, an alien artifact is discovered in the asteroid belt. The artifact seems to defy fundamental laws of physics, and it is at least three billion years old. In an attempt to learn more about the artifact, NASA launches the most advanced spacecraft ever built, crewed by the most qualified men and women in the astronaut corps.

But they are not alone in their endeavor. A being from the dawn of human history with a mysterious connection to the enigmatic aliens has been awakened, and he will stop at nothing to reach the artifact and claim its power for himself.

And what they discover will be beyond anything they could have imagined.

I like science fiction. I enjoy reading about space, aliens, space crafts. When I was a teenager, I was a huge fan of Star Trek: Next Generation (sigh, Jean-Luc Picard). So when I read the blurb for The Tabernacle of Legion, I thought to myself “This is going to be good“.  And, for the most part, it was.

There are two plotlines in The Tabernacle of Legion. One focuses on the discovery of an unidentified flying object beyond Mars. The other one focuses on the push to get people out there to look at it. The other plotline is about an alien who is trying to get to the same object. Both storylines meet in a spectacular collision. What happened? You need to read the book to find out.

I didn’t like the dual storylines. I felt that they took away from the core of the story (space, UFO, alien!!) and dragged it out. Normally, I don’t complain about dual storylines. I like them. Having more than one storyline adds depth and character to the book. But considering the story, I feel that maybe there should have been one. I would have loved to have known more about Ask, why he was on Earth, and why the Legion decided to freeze him. I also would have loved for a more in-depth look at the astronauts’ backgrounds. Also at their preparations for the journey to the object.

I thought that Ask was a very interesting character. His views on the “baselines” (aka humans) was different and fascinating. As was that he was brought to Earth to help shape humanity. But he was punished after a costly mistake. I enjoyed the whole nanonites angle to his storyline. It was interesting to see that he could use them as a weapon or the change his appearance. I do wish that more insight was given into what his mistake was or even his background.

I did connect with most of the main characters in the book, except Jed, the mathematician. He annoyed the ever-living out of me. Every once in a while, a character does that too me. When he was talking to his daughter, towards the end of the book, I was eye-rolling hardcore. Everyone else’s was moving and cute. His was….weird with a touching moment at the end of his dialogue.

There were a couple of twists at the end of the book that blew my mind. There was no lead up to either of them. Which was great and it changed the way I viewed certain characters.

The end of the book was interesting. Like I mentioned above, there were a couple of twists. I also liked what the author did with the ending. He left it open to a second story.

Pros of The Tabernacle of Legion:

B) Great view of space travel

Cons of The Tabernacle of Legion:

C) Ask’s motives for getting to the object

I would give The Tabernacle of Legion an Older Teen rating. There is sex (vague but it’s there), violence and some mild language. I would recommend no one under the age of 16 read this book.

There are no trigger warnings in this book.

I would recommend The Tabernacle of Legion to family and friends. I would also reread this book.

I would like to thank Kevin Schillo for allowing me to read and review The Tabernacle of Legion.