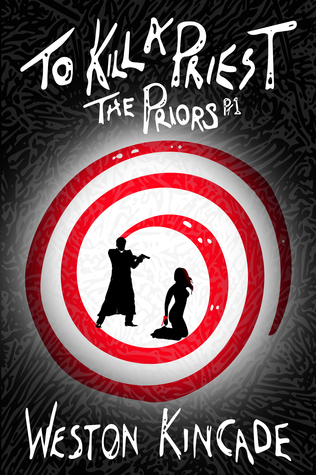 Where you can find To Kill a Priest: Amazon | Barnes and Noble

The universe is much larger than people think—with worlds spanning into infinity and human kind evolving into everything from vampires to the unknown. Are you one of these unlucky few?

Madelin is, and the government black-op agency called PASTOR knows it. To free herself from their clandestine clutches, she will have to trust an unknown godfather… the only family she has left after the agency’s murderous tendencies. As she strives to overcome her medically induced amnesia, she and her newfound friends must test the limits of this world and break them. The government has secret plans for her future if she remains… but will the next world be any better?

I do not like serial novels. The reason I don’t like them is that I hate waiting for the next book to come out. I am not a patient person. I am kind of like Veruca Salt in Willie Wonka and the Chocolate Factory. “I WANT it NOW” when it comes to books. But, if the books are compiled into a single book, then they are alright. To Kill a Priest, while a serial book, has episodes 1-9 under one cover.

To Kill a Priest starts off with an ex-mercenary finding a young woman dressed in a kimono. The girl has come out of nowhere. He makes a decision to help her. Meanwhile, a man has hacked into a government black op agency called PASTOR. This agency is responsible for murdering his best friend and his wife. They also have kidnapped their daughter, his god-daughter. He is determined to rescue her.

I enjoyed the fantasy aspect of this book. The author did a great job in explaining multiverses. He did an even better job of explaining how Madelin, Father Leodenin, and Jedd were able to open the rifts and travel between the dimensions.

I liked Madelin. I felt that she adapted to being able to open rifts pretty well. Considering that her first time was under duress. I liked the mental image that she used, a black rose. I did think that she was too trusting. I mean, she didn’t know Daniel from a hole in the wall and she went with him. But, she did turn out to be a very strong female character towards the end of the book.

The other main characters, Jedd, Roger and Daniel, each had their own tragic backstory. I didn’t see how the three men would figure into the book when they were separated by dimensions. But once they got together, they melded well together. They also melded well with Madelin. There were no awkward pauses in the book when they finally came together in the middle of the book.

I did like that the book was full of action and suspense. I don’t like it when guns or any sort of action are brought into books like this. But in To Kill a Priest, it went perfectly with the book. I also liked not knowing what was going to happen next. When I thought the author was going one way with the book, it went the opposite direction.

The bad guys at PASTOR. I couldn’t get over how evil Father Leodenin was. I do wish more was spent on PASTOR and exactly what tests they were running on the kids there. I am sure more will be explained in the next episode. The glimpse that the author gave was chilling. Seeing that Father Leodenin was once a test subject, I can only imagine what they were doing to the kids.

The last half of the book was a surprise. I did have my suspicions about Lord Alain and wasn’t surprised when Juno revealed the “big secret“. I was surprised at what happened at the end of the book. While I was expecting Madelin to do what she did, I wasn’t expecting who they brought, where they went and who followed them.

What I liked about To Kill a Priest:

A) Interesting mix of fantasy and suspense

What I disliked about To Kill A Priest:

A) The scene with Alain and Madelin. I wasn’t’ prepared for what he did

B) The scene where Roger was introduced. I winced for him

I would give To Kill a Priest an Adult rating. There is violence, language but no sexual situations.

There are trigger warnings for To Kill a Priest. They would be the beating of a woman, kidnapping, and rape (no graphic scene but talked about after the fact). If you are triggered by these, do not read the book.

I would recommend this book to family and friends. I would include a warning about the trigger warnings. This is a book that I would reread.

I would like to thank Weston Kincaide for allowing me to read and review To Kill a Priest.

All opinions stated in this review of To Kill a Priest are mine.

One thought on “To Kill a Priest: The Priors, Part 1 By Weston Kincade”