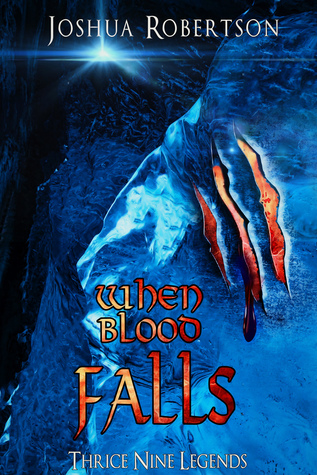 Where you can find When Blood Falls: Amazon | Barnes and Noble

Defending against the demons of the Deep has long given Tyr Og’s brethren purpose. When Tyr’s mother is robbed from him during childhood, he loses his will to live. Now, filled with rage and regret, Tyr hungers for a worthy death to bring an end to the futility of his life. In a short tale of blood and self-loathing, Tyr seeks the most honorable path to finally join his mother in the afterlife.

This is a violent and bloody story. While the violence and blood didn’t bother me, it might bother more sensitive people. So, a heads up on that. The violence didn’t bother me. I have reviewed other Joshua Robertson books before and I know what to expect from them. This book fits right in the world that he is creating. A violent, unpredictable world that is being overrun with demons.

I did feel bad for Tyr during this book. He suffered one loss after another. First his mother, then his sister. I can’t get much into the book other than that. Like I said above, it is a short story and  I would be giving away the entire book if I went into it.

I am not going to do a Pros/Cons list because the story is too short for one. I also feel that me doing that would be giving away spoilers to the book.

I would give this book a rating of Adult. While no sex or language, there is graphic violence. I would recommend no one under the age of 21 read When Blood Falls.

There are trigger warnings in the books. If you are triggered by graphic violence, I would not read When Blood Falls.

I would recommend When Blood Falls to family and friends but I would include a warning about the violence. This is a book that I would reread.

I would like to thank Crimson Edge Press and Joshua Robertson for allowing me to read and review When Blood Falls.

All opinions stated in this review of When Blood Falls are mine.

2 thoughts on “When Blood Falls by Joshua Robertson”