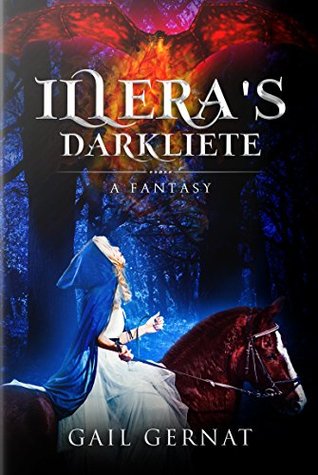 Where you can find Illera’s Darkliete: Amazon | Barnes and Noble

When the messengers from Frain arrive to secure the hand of Princess Illera to their selfish air to the throne, Torul, she hides. Forced by circumstances, and her father, Illera and her three companions journey to the cold, dark north. Fighting against her fate, Illera plunges the quartet into danger. But when she accedes to the demands of cruel destiny they must fight against a ravening evil that knows no restraint. Using her mixed blood heritage, can this innocent child learn and mature fast enough to control the forces ripping her world apart? Can she negotiate the political intrigues and defeat the hordes of Shul, the pirates of Carnuvon and the hatreds of Frain?

As I said in my review of Lera’s Sorrow, I wasn’t looking for another book to review. But something about the blurbs of these books called to me. I am very glad that I decided to read and review these books because they were fantastic.

Illeria’s Darkliete’s plot was great. It follows Illeria as she is forced into a marriage with the son of a kingdom that is threatening to invade. Illeria fights with everything she has against the marriage. Her guards, Lark and Raven, are won over to her side after she saves them. Forced on the run, Illeria makes allies from the most unlikely people. Will she have what it takes to defeat the King of Frain? Or will her world rip apart?

I like Illeria but not in the beginning. I thought she was acting like a brat when her father announced that he was sending her to Frain to wed Torul. I mean, come on, she hid in the walls of the castle to avoid meeting the ambassador. But as the story went on (and taking in the prequel with the King of Frain), I could understand why she acted the way she did. Made sense. She also rose to the occasion once she arrived back in Madean. I also thought that she did a great job of mastering her magic during her adventures.

Speaking of her magic, I loved reading about her powers. The author did a great job of increasing what she could do a little at a time. It made for a more pleasurable read for me. Illeria got to master a bit of her magic at a time before either her magic strengthened or a new aspect showed up.

I thought that the pseudo love triangle hinted at in the book wasn’t needed. But, saying that, I did not know who Illeria was going to choose. It was a big mystery until she actually did it. And yes, I was very surprised by it. I did get a giggle when certain people in the book kept referring to Illeria and her supposed pseudo-love triangle.

I did like Raven and Lark. I thought that their backstories were sad. I also thought that they were stubborn and headstrong in parts of the books. Lark always seemed to be the one getting kidnapped and used as bait to lure Illeria out. Raven seemed to take risks that were a little unnecessary. But, like I said, I did like them.

The bad guys in this book were bad. I had chills reading about Torul and the King of Frain. Out of all the bad guys in the book, they were the baddest of the bad. I can’t even describe them. You need to read the book to find out.

There was a twist towards the end of the book that made me go “Whaaaaattt“. I was not expecting this twist. It came out of nowhere. Talk about being blindsided.

The end of the book was what I expected. I liked that Illeria made her choice of who she was going to be with. I also liked that she took total control of her kingdom. What I liked, even more, was seeing Illeria and her family in the future. Makes me wonder what book 3 will be like!!!

B) Relatable and likable characters

A) The pseudo love triangle

B) The King of Frain

C) The whole journey through the swamp

I would rate Illeria’s Darkliete as a book suitable for Older Teens. There is violence, some of it graphic. There is no language. There is a scene where Illeria kisses someone (can’t say, big plot reveal) but nothing sexual. I would feel comfortable with anyone over the age of 16 reading this book.

There are triggers in this book. They would be the talk of rape, talk about past domestic violence. So, if those trigger you, don’t read this book.

I would recommend Illeria’s Darkliete to family and friends. I would include a warning of the triggers. This is a book that I would reread.

I would like to thank Andrea James Publishing and Gail Gernat for allowing me to read and review Illeria’s Darkliete.

All opinions expressed in this review of Illeria’s Darkliete are mine.