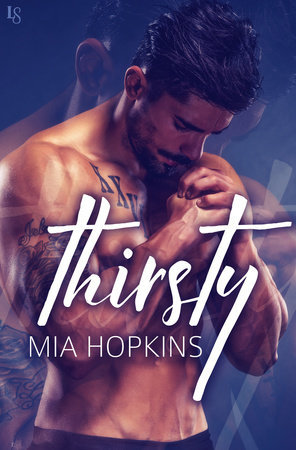 Where you can find Thirsty: Amazon | Barnes and Noble

My name is Salvador Rosas. Back in the barrio, my past is written on the walls: ESHB. Short for East Side Hollenbeck, my father’s gang—my gang. Hell, it’s a family tradition, one that sent both my brothers away. They used to call me “Ghost” because I haunted people’s dreams. Now I’ve got nothing going for me except a hipster gringo mentoring me in a new career. An ex-con making craft beer? No mames.

Still, people in this neighborhood look out for one another. That’s how I became Vanessa Velasco’s unwelcome tenant. Chiquita pero picosa. She’s little, but with curves so sweet they’re dangerous. I remember Vanessa from the old days, the straight-A student with big plans. Plans that were derailed by another kid stupid enough to think he was bulletproof. Now Vanessa knows better than to believe in empty promises. There’s a fire in her . . . and if I touch her, I might get burned.

I’m trying everything I can to go straight. But when East Side Hollenbeck comes calling, I might have to risk it all to find out if there’s a future for Vanessa and me. Because she’s the only one who can quench my thirst for something real.

I love a book with an anti-hero. Sometimes I need to read something a little darker than the other books I have read. Something that is more true to life than the romances that I love to read. I got it with Thirsty.

I will warn you guys, Thirsty gets off to a very slow start. But it is worth sticking around for. Oh, so worth it. The author lays the groundwork for Sal and Vanessa’s romance in those first few chapters. More importantly, she explains how Vanessa is connected to Sal.

Sal was trying to rebuild his life after going to jail for 5 years. Trying to stay away from the gang that he was born into is hard. Even harder is trying to keep away from Vanessa. Vanessa is his unwilling landlady who is also the widow of a fallen gang member. Can he stay out of trouble and the gang? Or will he go right back into the lifestyle that he was born into? Will Vanessa and his love survive? Or will it become a casualty?

I loved that the author made Sal imperfect. I loved that he acknowledged that he did wrong in the past and he was trying to move past it. His anxiety attacks and the resulting self-harm made my heart hurt for him. I also like that he was a quiet guy. He didn’t have much to say. I thought that he did make a good try at trying to stay away from the gang. It was hard for him, seeing that he was living in the neighborhood that they ran. But I had to give him credit because he tried so hard to stay away.

I thought Vanessa was kind of witch with a b at the beginning of the book. But I got to thinking about it and you know what, I don’t blame her. She was trying to keep her daughter and grandmother out of the gang. So when Sal shows up in her garage, I don’t blame her for blowing a fuse. He also brought back memories of her husband, good and bad. As the story went on, though, you could see her defenses going away. The only thing that she asked of Sal when they got together, was that he stays out of trouble.

I didn’t see the romance between Sal and Vanessa at first. It was all sex, which was fine with me. The night of the carnival was when the romance part of the book hit me. Sal was heads over heels for Vanessa. But it was rocky because of Sal’s gang association. When certain events happened in the book, I didn’t blame Sal for leaving or Vanessa for kicking him out.

Besides the plotline where Sal is trying to rebuild his life, there are a couple of other major ones. There is the plotline with Sal’s father, who died when Sal was in jail. He was greenlighted by the head of the gang. But there is a twist in that plot that surprised me. There is also the plot with the gang and Sal’s relationships with different members. Both of those plotlines were not resolved at the end of the book. They were both left open.

The author does include a note to the readers from the author. Let’s just say that I am glad that she had such in-depth access to information that helped created her characters.

I would give Thirsty an Adult rating. There are some graphic sex scenes. I wouldn’t recommend for anyone under the age of 21.

I would recommend Thirsty to my family and friends. But with a warning about the sex scenes and violence. I would also reread this book. I enjoyed reading it and connected with the characters.

I would like to thank Random House Publishing Group, Loveswept, and NetGalley for allowing me to read and review Thirsty.

All opinions stated in this review of Thirsty are mine.

One thought on “Thirsty (Eastside Brewery: Book 1) by Mia Hopkins”